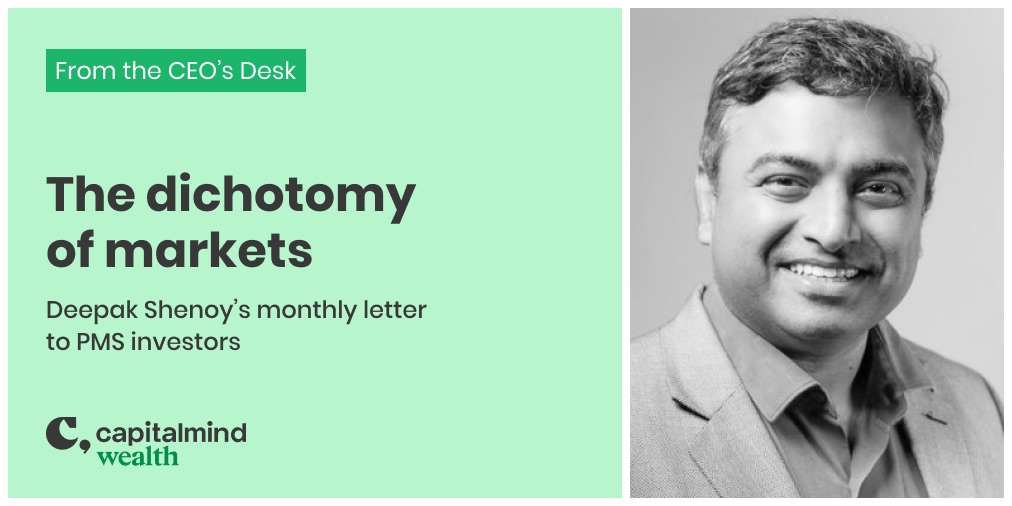 The Dichotomy of Markets

The Covid numbers look grim and by all accounts, things are getting more rough in nearly all cities in India. And we are opening up on the extreme lockdown because it’s simply unsustainable for the very poor to keep everything locked up this long. The month of May saw a stimulus package that hasn’t got enough to write about. The thing we have to consider is: we’re going to have to recover without a stimulus or a vaccine, and with a mega pandemic that’s getting worse.

And in that vein, markets are going up. Stocks are at the highest level since the tumble in March, and in the US (a reasonable part of our long term and index holding) the markets are near all-time highs. Debt markets too have shown a strong return, with the RBI cutting rates dramatically and ensuring liquidity flows to many borrowers.

Result: Short term debt has fallen to below 4% for some of the best firms.

And it’s evident now that foreign investors find some Indian stocks attractive. A sale of Hindustan Unilever stock by Glaxo, which sold its consumer division to HUL, saw an inflow of over Rs. 15,000 cr. from foreign investors. Stake sales by promoters of companies, like Kotak Bank and Bharti Airtel, saw subscriptions of over $1 billion each (Rs. 7,000+ cr). And there was fresh sales in companies like HDFC Life and a few other companies.

The biggest of the lot was Reliance. Which has raised roughly 97,000 cr. in the last two months, from Facebook, KKR, Mubadala and the like. Additionally, they concluded a Rs. 13,000 cr. rights issue as well. It’s been a phenomenal fund raising spree for everyone, even when markets remain 20% lower than the peak and the economy looks like it will take a while to recover.

And it’s not just the foreign investors. Even Indian equity mutual funds received inflows through this crisis.

The dichotomy between markets and the economy hasn’t been any more pronounced than it is now. Or has it? In 1958, the US Industrial Production had fallen 10% in less than a year, but the stock market was up 30% in about the same time.

In 1958, US Industrial Production had fallen 10% in less than a year, but the stock market was up 30% in about the same time. Click To Tweet

John Templeton, an investment counselor at the time, wrote:

The influences on stock prices are so numerous and so complex that no person has ever been able to predict the trend of stock prices with consistent success.

The influences on stock prices are so numerous and so complex that no person has ever been able to predict the trend of stock prices with consistent success. - John Templeton Click To Tweet

This is true today also. The redeeming factor, in our opinion, is liquidity. The power of money flowing, that has changed the investment landscape to the point where trends in the stock market are opposite to the trend in the economy.

We spoke of this earlier. That the US printing so much money would end up bulking up asset prices around the world, and stock markets primarily for now. That money has started to flow in. After more than 118,000 cr. was exited in March by foreign institutional investors, there was a lull in April and May when exits were only Rs. 8,500 cr. each month. In June, so far, foreign institutions have added over Rs. 21,000 cr. in equity.

Sometimes, all it takes to lift markets up is the lack of extreme selling.

It doesn’t mean the economy is back. It means that some of the selling was a desperate sell, either in panic or to generate cash. Both these are common. If you watched the news around the Covid spread, it looked almost definite that all businesses would hurt for at least two quarters, and many people panicked. Others, who had too much debt, decided to raise cash by selling shares, either voluntarily or because their lenders forced them to.

Another big thing that hasn’t yet come our way is that the mega stimulus in the west – totalling more than $3 trillion – is likely to see a little bit wander into India. Not because India is special. But because in the scale of things, India is a tiny allocation, but that tiny allocation (say 1%) is a significant number for us. 1% of $3 trillion is $30 billion – which is over Rs. 200,000 cr., or twice what left India in March.

Just printing money can make things better, even if the underlying economy is in the doldrums. This can cause inflation, but in the last 10 years, it has simply not done anything of the sort – in fact, the higher level of productivity and technology worldwide has driven prices down.

We’re optimistic that India will recover, eventually, even economically. Markets, however, will not be a one-way street, and just as we have seen a rise so far, we are likely to see sharp corrections as well. There is going to be a spate of bad data that will hit us, and we have to be ready for enduring more pain.

What are we doing?

So far, our long term strategy has been to stick with larger caps, but we will now look to add more names that we believe will survive. However, we believe that the market will give us better prices in the near future, so we’re not in a big hurry to deploy cash – and we are at 5% to 10% cash levels.

The important thing to do now is to be ready to move. The word, though used negatively nowadays, is “stalk”.

In the jungle, the tiger will stalk its prey, sometimes for hours, before it makes a move. Sometimes it will be absolutely still. And even retreat a little. It’s years of evolution that has taught it the skill: you have to wait for the opportune moment. In the markets, you have to behave similarly at some times – wait and stalk the companies you really like. Because the time such as now, is when their past will not matter as much; it’s what happens now that will determine their future. We’ll probably sell a little, wait a little, and then come back in strong.

On the passive side, the Nasdaq 100 is on fire. We’re almost scared to type this because it could jinx the trend. But in rupee terms the N100 is up over 50% in a year, and in Capitalmind Wealth we have it in both our active and passive portfolios. It’s absolutely the best performing equity allocation you could have had, but you will not hear it advertised or sold to you at all – even by the mutual fund house that runs this N100 fund.

Simply because of one thing: commissions. This fund gives no (or very low) commissions, and that’s why it has to be bought, not sold. Luckily, we don’t bother about commissions (and do not receive any), so we’ve had our participation, however quietly.

The debt portfolios have been rejigged to reduce our dependence on private sector debt. We track debt markets constantly, and we’ll adjust as we see things move.

In the next three months, the markets will provide opportunities, and we continue to recommend that increasing SIPs or fresh investments is an appropriate strategy. Deploying it over a period is our job, and we will accelerate it if markets correct substantially. Interestingly, many of our own expenses are much lower nowadays because there’s not that much to spend on, so it makes sense to put that money down for investment.

Also, we want to take this time to suggest that if you haven’t done so, please plan to give a little to charity. Many of you will not have time today, what with kids and life and masks and all. But you can build towards it, over the next three to five years. Even a Rs. 10,000 investment in a liquid fund, per month, should build a corpus of Rs. 4 lakh in three years.

The median charity contribution in India is Rs. 5,000, and you should be able to do 5 times that, with just the interest from such a corpus. It’s as simple as putting some money into a liquid fund every month. If you like we can help you build that at Capitalmind, as a separate goal as well. No matter how you do it, we all know there will be another pandemic in the future, and we have to plan to give meaningfully in the future as well.

2020, so far, has seen a pandemic, cyclones, locusts, lockdowns and perhaps the thing that will make some of us change our behaviour the most: online education for the kids. I’m fascinated by the possibilities this throws up, and at the same time fear that the older ones will simply be playing Fortnite with their classmates in another window. It’s a new reality. Some of the old (like my fears?) should die. Some of the new will become normal. There is tremendous creation in this destruction.

In a song in gulaal, Piyush Mishra has this line:

(if there’s no desire to win, and you have no control,

If death isn’t the end, then why be afraid of it at all?

Say it aloud, that you’re in the fight.)

To me, this is about the battle with my own self, my fears, my anchored beliefs. If there is a time for change, this is it.