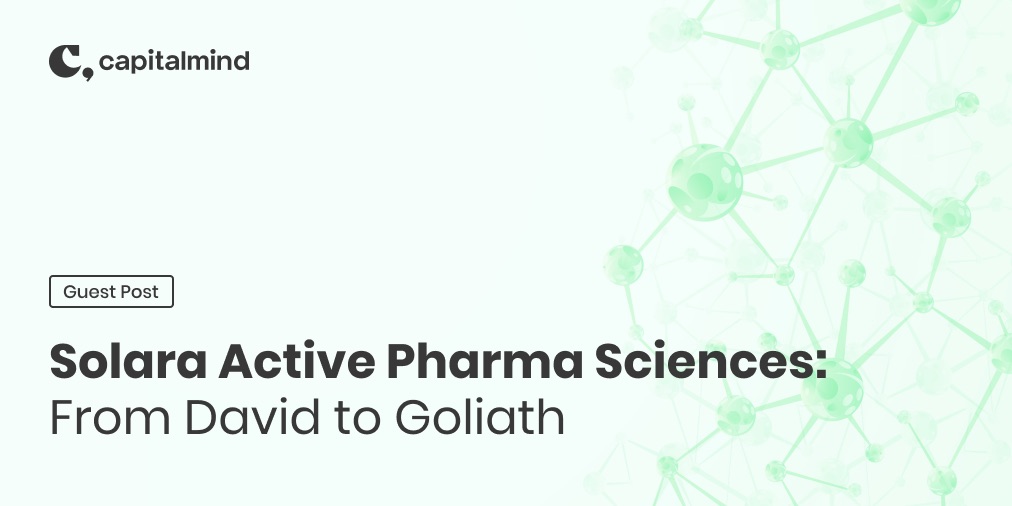 SAPS was formed in the year 2018 by carving out the Active Pharmaceutical Ingredients (API) business of Strides Pharma and Sequent Scientific. Within 6 months of the carve out taking place, the company went public and listed at a price of 239. It reached a low of 154 on 13th July, ’18 only to hit an all time high of 737 is less than two years, a 6x jump in the price.

But before delving deeper into this small-cap stock having a market capitalisation of ~Rs. 1,273 cr. on 22nd May, ’20 let’s take a step back and have a look at Strides, Sequent and the man behind the show, Mr. Arun Kumar.

Strides Pharma was earlier named as Strides Shasun (after the USD 200 Mn acquisition of Shasun) which was earlier named as Strides Arcolab. The API carve-out of SAPS is not something new. In 2010, Strides carved out Agila Specialities – their injectables business and ended up selling it to Mylan Inc. for USD 1.65 Bn in 2013-14. I specifically remember this deal since I was holding shares of the erstwhile ‘Strides Arcolab’ and was happy to receive a dividend of Rs. 625 per share in FY14.

In 2010, Strides carved out Agila Specialities – their injectables business and ended up selling it to Mylan Inc. for USD 1.65 Bn in 2013-14. Click To Tweet

Sequent Scientific, is India’s largest animal health company. Their key markets are spread across Europe, Turkey and a host of other countries globally. As early as 8th May, 2020 – the US based Private Equity firm Carlyle group has agreed to acquire a 74% stake in Sequent Scientific for USD 210 Mn (Rs. 1,587 cr.)

Fortune India had called Arun Kumar as Indian pharma’s maverick thinker[1]. As early as 2019, The Ken did a piece on Arun Kumar labelling him as ‘India’s best kept management secret’.

“His ability to seal a new deal sooner than the ink on the previous one has dried, makes him an unusual wealth generation machine[2].” – The Ken was quoted stating this in their introduction.

SAPS was provided to existing shareholders of Strides (1 for every 6) and Sequent (1 for every 25) when the existing businesses were restructured to make SAPS a pure play company on API.

The pharmaceutical business is fairly complex. Broadly, one can split the business offering into formulations and API. Formulations involves preparing new drugs to address specific diseases or illnesses whereas API as the name suggests, manufacture the raw materials or develop specialized molecules that act as an input for formulations.

In India, most of the API production is captively consumed and most big pharma companies have an integrated offering of API and formulations.

Amongst the key players in API production in India – Dr. Reddy’s, Lupin and Aurobindo Pharma are key players. Since these companies are also focussed in manufacturing of bulk drugs, their focus on developing niche molecules that are complex in nature takes a backseat. Complex approvals can become a challenge and non-availability of high volumes makes them keep their resources allocated to existing portfolio.

SAPS has created a niche position for itself by being a pure play on the API space. Shortages led by shutdown of plants in China or paucity of raw materials gives them the right time to capitalize on the opportunity.

In their latest investor presentation, they have given a granular level detail of all their manufacturing facilities and a timeline of all the audits that have been conducted by the global regulators. ​

Another interesting aspect about API companies is filing of DMF’s i.e. Drug Master File which is a detailed document submitted to the US FDA containing chemistry, manufacturing and controls of a drug component. API manufacturers with a large number of DMFs are often considered more reliable in terms of quality, regulatory standing, and ability to meet Current Good Manufacturing Process (cGMP) requirements.

The Indian pharma pack has been clearly dominating the FDA filings. In the top 100, there are close to 30+ Indian companies with around 3,535 DMFs. Dr. Reddy’s is leading this pack (Global Rank 4) with 291 filings. In terms of pure API play, Solara is ahead of a few semi-API plays like Neuland Laboratories, Divis Labs, Laurus Labs and Cadila Healthcare.

As per their Annual Report, SAPS has presence in close to 75+ countries. Split between India and the rest of the world is 46:54 with Mexico, US, Japan and USA being their top 4 markets (collectively 23% of total sales and 43% of global sales). 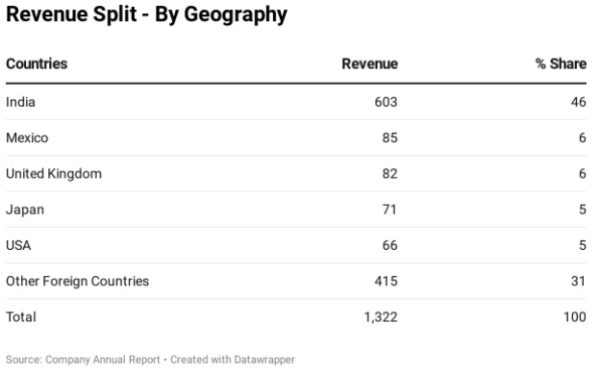 After the new environmental regulations had kicked in in China, there were multiple stringent requirements put in to both local manufacturing and global sourcing of imports. One of them was the requirement to have a Zero Liquid Discharge (ZLD) on the plants. SAPS is ZLD compliant and has also listed that as a key strength in their Annual Report to dominate the Chinese market.

China is a major supplier of API and critical active salts to the global pharmaceutical supply chain. The current crisis has opened up a big void which the Indian pharma companies are rushing to fill in.

On 3rd March, 2020, the Government of India placed export restrictions on 26 API and formulations to which 200+ firms applied to DGFT seeking licenses to ship restricted API. The export restrictions can lead to cancellation of other orders for pharma companies which cannot be captively used for the domestic market. Thus, having a diverse product mix and long standing relationships with existing customers can play as a key strength here.

While India contributes ~20% to the world generic pharma supply chain, for inputs they are dependent on China for ~67% of chemical components (API imports are ~USD 2.5 Bn from China annually).

Of the export mix for Indian pharma, North America leads the pack (30%) followed by Europe and Africa (~16% each).

On 1st April, 2020, the FDA announced an immediate withdrawal of all drugs containing Ranitidine on some studies that found a contaminant.

Ranitidine forms 7% of the overall revenues for SAPS (as per a release put out on 2nd April, 2020 by the company) and is amongst the top 10 API for them. This immediately led to a correction in the stock price but the company did not foresee any significant impact with this ban.

TPG Capital, a US based global Private Equity behemoth with ~USD 103 of Assets Under Management announced an infusion of ~Rs. 200 cr. in SAPS in February. ’19 at Rs. 500/share through warrants. SAPS made a preferential issue of an equal amount to it’s existing promoters at Rs. 400/share. The share price at the time of announcement was in the range of Rs. 370-380 and remained fairly flat for a few months.

SAPS has a set of diverse global and local investors – right from a healthcare focussed Swiss firm, to a US based hedge fund and the makers of Threptin biscuits in India. SAPS has been achieving a healthy growth, improving it’s EBITDA margin along with it’s bottom-line. It’s superior product mix and achieving efficiencies in manufacturing is effectively translated in it’s Statement of Profit & Loss. The first full year of operations was in the year 2018. SAPS was in a healthy runway to achieve a higher revenue but got impacted due to Covid-19 shutdown in Q4 leading to a short dip in Revenues. Despite that, Revenue has shown a CAGR of 159%.

EBITDA has grown at a CAGR of 203% alongside margin expansion from 12 to 20%. Similar growth has been seen in the bottom-line – both in value and margins. 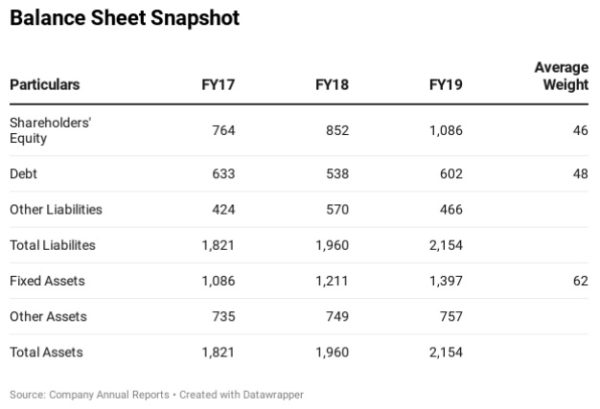 On the Financial position, SAPS has been infusing equity and also paring it’s debt levels. As on FY19, the debt is ~28% of the Liability side. The company was incurring capex for a new capacity in Vizag and can take care of additional demand anticipated.

With the world moving towards getting their priority on Healthcare back and multiple future developments happening in the pharma space, we can see more breakthroughs coming in this space. All this will fuel the requirement of APIs and other complex molecules which SAPS has a clear focus on.

With the backing of Mr. Kumar, well known for his ability to execute deals along with a bouquet of global investors present in the stock, it will surely be interesting to see how SAPS comes out in the future. At a time when globally pharma companies are filing anywhere between 7-12 DMFs, Solara has 84. The company, as per their annual report has claimed to file 140+ DMFs upto 2019. As per their latest investor presentation released along with their full year earnings, the company has maintained strong guidance for FY21 despite the Covid – 19 situation and ban on Ranitidine.

If things go as planned, SAPS could well be a David walking towards being the Goliath.

The above information and analysis is for informational purposes only and should not be considered investment advice.