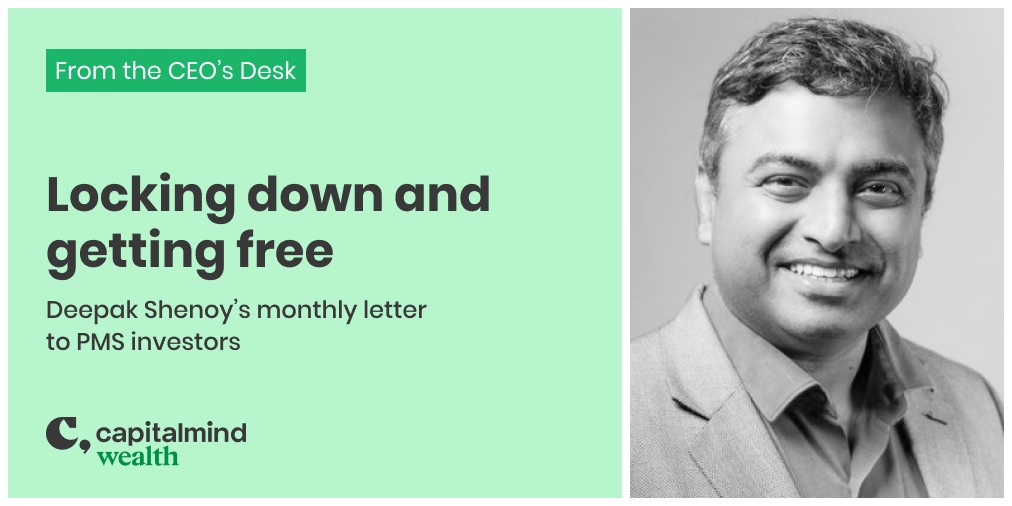 [This post is an edited excerpt of the April 2020 letter to our Capitalmind Wealth clients. To know more about our PMS Offering, write to connect [at] capitalmindwealth [dot] com]

Firstly, let me say I hope you are all safe and that none of you have to face the medical challenges of Covid-19. These are tough times, and more important than anything else is to take care of our health.

The lockdown’s here, and it’s very tough. This letter is not going to tell you the standard things you have heard and probably very sick of:

What this letter will tell you about is the basic fact: Nobody knows how this is going to turn out. Neither do I. We’re making wild guesses, and some will work, but every single one is logical. People will buy more cars. Because who wants to travel in public transport, especially if you have a cough?

Or, people will buy no cars at all. Because there’s no money, because layoffs, crunch in incomes etc.

There’s a logical take to a new normal, because anything can be the new normal. You can’t predict it, because either side of an argument may be right tomorrow. There are hardly any precedents.

The only thing you learn is: Don’t predict, react. New information is more valuable than all the past you’ve read about. Those balance sheets you liked? They are based on cash flow, and there’s no cash flow today because the company’s product is sold in paint shops, which can’t open anywhere in the country. And anyhow, who wants to paint their house now?

The only thing you learn is: Don’t predict, react. New information is more valuable than all the past you’ve read about. Click To Tweet

Still, a strategy is required. When you strategize you will take certain positions, based on a hypothesis. This hypothesis may be right. And it may be horribly wrong. If you hold on to your convictions when the market tells you otherwise, or new data arrives that gives you a clue, you want to rethink, and you must rethink. And even more in such dynamic times.

What are we doing at Capitalmind?

We discussed a few important things at the Capitalmind Wealth Webinar a few days back. Please do watch the video here.

We’ve reshaped the Long Term Multicap, based on some simple concepts.

We believe that the recovery of the economy will impact different stocks differently. Some will get impacted faster and the risk of being wrong is very high and we call them “Market Fire Sale” – where the stocks can continue to get cheaper of course, but there’s a chance of a strong recovery.

We believe that the recovery of the economy will impact different stocks differently. Some will get impacted faster and the risk of being wrong is very high and we call them “Market Fire Sale” Click To Tweet

We have stocks in each of the above quadrants. And the ratios will differ, because a stock can shift between quadrants – a reasonably valued core stock can move to a market fire sale, or vice versa. We have to be nimble and follow the situation closely – as more clarity emerges, we will focus on the winners.

The other big hypothesis is about following the money. The reaction to global economic slowdowns is that western economies are printing money like it’s going out of fashion. It’s a massive injection of new money, over $5 trillion in total. That much money will give cash to people who are desperate to sell bonds, mortgages, commercial paper and what not – the US Fed is buying them all. Typically, eventually, about 1% of this money reaches India, as investment. Because when you flood investors with cash, they first go to safety (US Treasury bonds) and then, as they see that things are normalizing, they start to invest all over again.

When you flood investors with cash, they first go to safety (US Treasury bonds) and then, as they see that things are normalizing, they start to invest all over again. Click To Tweet

What foreign investors took out was about $13 billion dollars from India, in equity and debt. If 1% of the global money printing of $5 trillion comes back in, that’s roughly 50 billion dollars. That’s about 4x what went out. This money won’t come back in one day or one month, and it will take roughly 6 months, but when it does come, it will flood money into the larger cap stocks. So we’ll apply our matrix on the stocks that the foreign investors like, and eventually, go across to smaller stocks as well.

A friend once told me, “Angels can fly because they take themselves lightly”. Indeed, it’s time to be an angel, and be true to the data – hold those convictions, but be ready to let go.

The April Recovery: Is it for real?

This doesn’t sound very good because every time that returns in the first four months are bad, the year has actually ended badly (other than 2003).

But the point isn’t to be invested only till the end of the year – it’s for longer, and very bad years are generally followed by very good years.In a global glut of liquidity, markets will react very differently from the underlying economy itself, and the economy could continue to hurt while markets remain unnaturally happy. However, we have to remember that nothing like this has happened to us in the last few decades, and we’ll have to slowly adjust to the actual underlying reality as it becomes evident.

In all of this, there was the crisis in debt funds on the 23rd of March, when Franklin announced the shuttering of six of it’s funds. We sent a detailed note on that – you can check on Progress for the April letter. Also, we discussed the run on the debt mutual funds in our recent podcast.

In the subsequent period we find that the debt markets are still very unstable. In the week following April 24 (the day that Franklin stopped their funds), debt funds have lost over Rs. 35,000 cr. by redemptions.

In fact, since then, the Credit Risk debt fund category, which largely invests in bonds that are not totally pristine, have seen customers taking out roughly 31% of their money. The category has seen assets fall from 48,000 cr. to 33,000 cr.

Why should we care? It’s a cascading issue. A company goes to the debt market issuing bonds, instead of taking a loan from a bank. Why? Because the debt market offers lower rates, since the mutual funds are happy to accept 8% when a bank might only lend at 11%. When mutual funds see redemptions, they are forced to sell this debt, sometimes at lower prices. This means the “yield” in the market goes up, effectively increasing interest rates for everyone. After all, if I can buy Reliance bonds from a desperate mutual fund at 8%, why would I provide a lower quality company with a loan at less than 10%?

This also creates cash-flow issues for corporates who have forever relied on Mutual Funds to buy their short term debt. With the mutual fund investors exiting, the funds don’t have money to buy. Without their money, the corporate has to look at other avenues such as loans from banks, which either have a higher cost, or are simply not available any more. A mutual fund may not have the limitations that banks have when lending, so some corporates who can borrow from a mutual fund may not even qualify for a bank loan.

Over the next few weeks, this is going to evolve further. April salaries may need to be (partially) paid, and there will be pressure to allow certain companies to delay payments. Debt funds will have serious volatility – they can’t really easily allow for delayed payments.

What we should be aware is:

We don’t think this will have any impact on liquid funds, or government bonds + PSU or Bank funds. Our portfolio is thus adjusted accordingly.

This is a long letter – but we don’t really write short letters. However, as the lockdown progressively eases up, we will gear up for more information on companies, sectors, debt markets, banks and governments, and prepare for more action. The gist is this: Don’t predict, react. Do a what-if analysis from the perspective of: what will you do if X event happens? And because we are optimistic, in the world of many such X events, we ignore the possibility that the world will come to an end.

To end, we’ll have a sher by Faiz, that seems oddly appropriate:

(The heart hasn’t lost hope, it only hasn’t found success

It’s a long evening of sadness, but it’s only an evening. )

Looking forward to the morning,