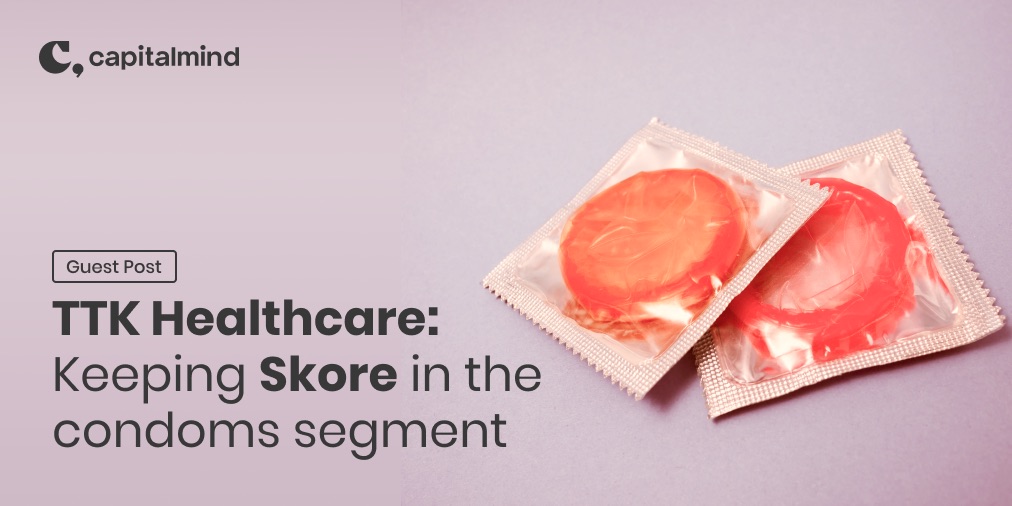 This is a guest post by Saket Mehrotra. CA, CS – Sensex Follower since ’09. Number cruncher by the day, avid reader and chef by the night – serious procrastinator in between. Coffee connoisseur, book store hopper and Metallica fan. He’s on twitter @mehrotra_saket

In a country that has close to 135 crore (1.4 Billion) people and adding 1-2 Crores (10 – 20 Million) people on an average every year, its safe to say enough people are having sex.

With a high share of millennial / Gen Z population, increasing internet penetration and rising awareness of sex and wellness, the use of contraceptive products has seen increased adoption. Reducing transmission of STDs (Sexually Transmitted Diseases) and being more convenient alternatives to contraceptive pills, IUDs has meant condoms have been a rapidly growing category.

With rising adoption has also come a range of firms competing to get a share of this pie.

In this post, we will specifically look at one part of this industry – Condoms.

To understand how Skore managed to achieve this feat in an intensively competitive market, we have to go back in time.

The TTK Group introduced condoms to the country way back in 1948 through the brand Durapac, which was later known as Durex. They entered into a distribution arrangement with the London Rubber Company (LRC) of the UK, and then got into a Joint Venture (JV) with LRC to manufacture condoms. LRC was renamed to LIG and the JV was called TTK-LIG.

It was the first company to setup a condom manufacturing plant in 1963 in India. TTK was responsible for revolutionizing the ‘Kohinoor’ brand when it was launched in the 70’s. By ’97 TTK was taking care of ~40% of global demand for Durex. LIG sold it’s stake in the JV (TTK – LIG) to SSL International in 1999. This was eventually taken over by Reckitt Benckiser (RB).

Reckitt Benckiser wanted to re-work all the existing commercial arrangements and the JV suddenly turned sour. In 2012, TTK lost to RB in a court battle by losing rights on the ‘Kohinoor’ and ‘Durex’ brands eventually buying out RB’s stake (49.8%) in the JV for INR 150 Cr. TTK launched their indigenous brand by going all in on their own – Skore.

Between 2012 and 2015, Skore managed to do magical things. The competitive landscape changed drastically. 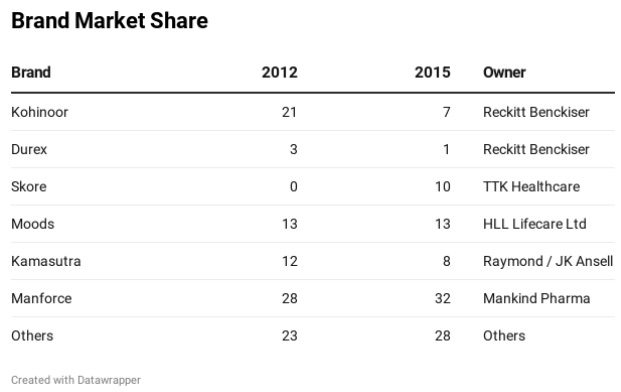 Kohinoor and Durex collectively controlled a quarter of the Condom market in India. With Skore coming in, this dominance reduced by ~67%.

While Manforce has been able to maintain it’s pole position, Skore has disrupted the market and collectively outstripped Kohinoor, Durex & KamaSutra.

TTK Healthcare is in the business of selling condoms in India since independence, obviously knew the market inside out and much better than any other close competitor. They had the suppliers, the distributors and close to six decades of experience in operating in this market. 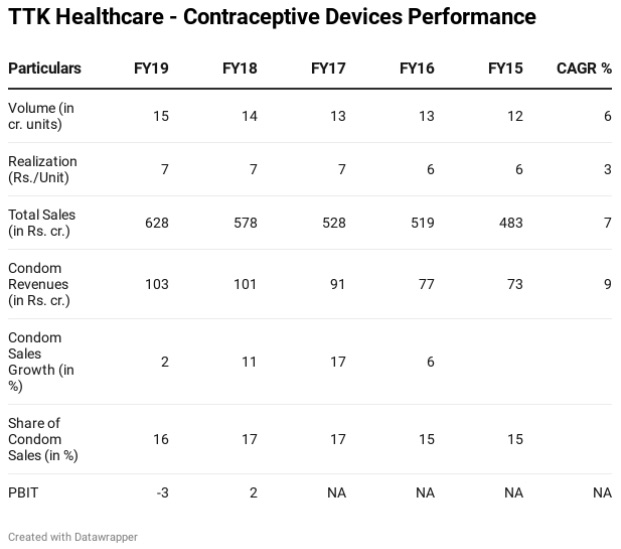 TTK Healthcare does not disclose condom sales separately. It started listing the split w.e.f. FY 18 under ‘Protective Devices Business’ thus the segment profitability i.e. PBIT is available from that year. A 0-100 cr. in sales feat is not an easy task and that too going against a global player, RB. While Skore is still in a brand building phase, we can see the profitability improving with reduced marketing spends and faster adoption amongst Indian consumers.

To drive home the point, Cupid Ltd. a comparatively smaller listed player in the Condom space in India, does almost 95%+ in exports to other countries. It has consistently been able to maintain a health profitability margin in the range of 25-35%.

What lies ahead for Skore?

Apart from selling condoms, Skore has been innovating with its product range. It launched its range of Lubes and introduced packs of 10 (Champion series) to boost Revenue mix in the year 2018. While the brand has stayed away from doing expensive ads with Bollywood celebrities (Ranveer Singh do-the-rex for Durex), it did sign up Dwayne Bravo and Chris Gayle as brand ambassadors in 2017.

What has truly set Skore apart with innovation has been the year 2019. TTK’s Research and Development division has been actively developing various value added, innovative and differentiated products which the Company plans on launching in FY20. (We can expect some rollback due to the present Covid – 19 situation.)

The Company has launched Pheromone Spray and Vibrating Rings (single and multiple use with Bluetooth and remote-control features) as their newest offerings. Both these products have not been advertised much compared to their range of condoms but popular e-commerce sites have already ran out of stock !

Condom usage in India is almost 1/6th the size of various other major economies in the world establishing that there is huge headroom for growth. However, adoption of condoms in India has not been very popular. In a system that still has a fair share of patriarchy, the burden of birth control is often shifted to the woman  leading to more popularity of post-intercourse modes such as contraceptive pills, abortion etc.

With a young millennial population and a country with almost the highest number of people  in the world, the addressable market is big. As e-commerce penetration is increasing, the taboo around buying condoms is also diminishing. Apart from chemists and modern trade, condoms are today stocked at the retail kirana store too.

Competitive intensity is surely heating up in this space. Manforce has been leading the pack and has a strong brand recall especially with Sunny Leone as their brand ambassador. KamaSutra which pioneered and glamorized condom use in India with the legendary tv commercial featuring Pooja Bedi  recently saw a buyout of Ansell’s JV stake by Raymond.  Moods is distributed by a GOI owned entity and its market share has fairly remained flat.

Skore has kept its ears to the ground and has been listening to its consumers. In 2013, they added disposable sachets to allow users to dispose of condoms hygienically after use.

In 2014, they launched ‘Book of Secrets’ – an innovative packaging format to maintain discretion in buying and storing. It will be interesting to see if Skore is able to replicate their magic with the new range of products right from Lubes to Pheromone Sprays to Vibrating Rings.

With almost 60+ years of experience and having a successful run till now, it will be interesting to see how they are able to capitalize on the ‘India’ opportunity.

TTK Healthcare – The Other 84%

Apart from Protective Devices, the company operates in five other segments. Let’s take a deeper look at the Revenue and EBITDA mix for the segments. The company sells Atlases and Books under the ‘Others’ segment which is insignificant in the overall share of Revenue and EBITDA. Out of the remaining 5 segments, Pharma, Consumer Products and Medical Devices makes up 72% of total Sales and contributes to 120% of the overall EBITDA. The Protective Devices and Foods businesses presently do not make money for TTK and contribute to an overall loss of ~20% at the EBITDA level.

The Consumer Products division sells the iconic Woodwards brand (a 100-year-old brand used amongst babies for aiding digestion), Eva range of cosmetics and various home and hygiene products under the ‘Good Home’ range. With a sales mix of 31% and an EBITDA contribution of ~63% this is clearly the cash cow for TTK Healthcare. With an increased focus on home and hygiene products, TTK Healthcare could well capitalize on the opportunity that the post Covid-19 customer presents.

The Skore sales also comprise of contract manufacturing done for other brands (Durex etc.) & other international export tenders that the company participates in, from time to time. With a sharp focus on the domestic market and differentiated offerings with respect to new sexual wellness products, this segment can see renewed interest and more competition in the future. Compared to Cupid, which is purely into exports and is now trying to build domestic brands, Skore is doing the exact opposite. With a greater mix of exports, we can see TTK’s margins improve and the segment show signs of profitability.

The stock has given a flat return (~1%) in the last 10 years compared to its peers in the Pharmaceutical and FMCG space which has clearly outperformed. Due to the unique mix of products TTK sells, it is hard to find a comparable stock for benchmarking. With both the sectors showing strong resilience in the Post Covid – 19 world, can TTK Healthcare shine brighter? We will have to wait to find out.

The above information and analysis is for informational purposes only and should not be considered investment advice.