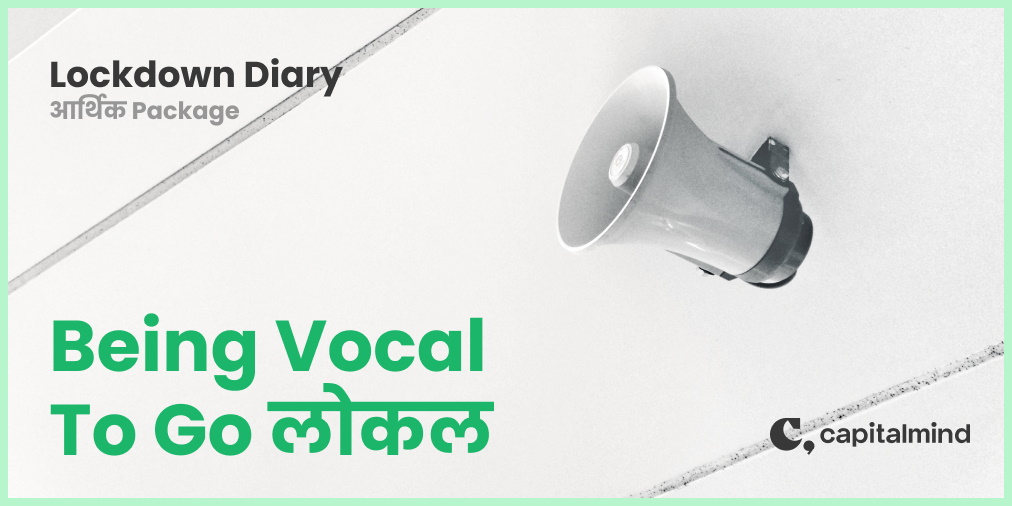 A twitter thread that seems to have gotten some attention, so I’ll keep it on as a post. This is in light of the Narendra Modi speech where he suggests a move to self-sufficiency. Or, to be Vocal to go Local. My thoughts:

Let’s go local: The RBI owns 35 lakh crore worth of US govt bonds. They own just 10 lakh cr. of Indian govt bonds. Our own central bank won’t go local?

To be fair they don’t exactly own 35 lakh cr. of US govt bonds – but they are foreign currency reserves, in different instruments, all held as effectively foreign assets. Could be bonds of the US, US, Switzerland etc.

My point is not to hold LESS of those bonds. It’s to not resist buying more govt bonds. Because this is really the time for the RBI to print and buy Indian government bonds to support liquidity. In the last few years – and indeed even in the last twelve months, the RBI has printed rupees like there is no tomorrow, to buy dollars. That was ostensibly to prevent the rupee from appreciating too much but it’s also this rabid fear that will never have enough dollars. Why should it not use the same enthusiasm to buy government debt and bring down interest rates in the market?  Even a tiny little 5 lakh crore will help, at this kind of crucial time.

Let’s go local: Our RBI’s gold isn’t even located in India, mostly. Even Germany and Russia have repatriated their gold over years. Why can’t we go local with our central bank’s gold?

The RBI has admitted that it has kept part of its gold reserves outside India. (See press release) While this may not sound bad, the point about having gold reserves is to be self sufficient – otherwise why have gold at all as a reserve. In a time of crisis, the foreign country may choose to not return this gold – or indeed, may have pawned it elsewhere. It is this fear that has caused countries like Germany and Poland to repatriate their gold back. Gold is very useful to have in India – where we import so much (second largest user in the world), that any imbalances can be met by the RBI locally if required, but only if they have their gold here. Also, a bigger storage facility means more jobs and equipment locally. Why not?

Forget the past. This is about now and the future.

The story goes that India buys sophisticated military equipment from abroad but when there is a local conflict some of those countries can stop giving us supplies or repairs, which isn’t exactly nice. But India hasn’t really allowed domestic firms to research and build great defense equipment either – and we have done so recently. We should do a lot more.

(The problem with buying locally, apparently,  is that any bribes get paid here and can be traced. A foreign source can easily give money in some kind of wrapped shell which isn’t easy to identify. But that’s all the more reason to push for local suppliers.)

Let’s go local: The income tax law says if you get investment from abroad, no #StartupTax but if you get it from local, we can slap you with a notice. Ditch “startups” – this is for any company. Let’s go local here?

I was the first to write about the Startup Tax in India. This tax makes the tax authorities suspicious if a domestic person buys stake in your company at a “premium”. But not if a foreigner does. This is a nonsensical law that needs to be removed altogether. They removed it for “registered startups” – which are companies registered with the DIPP as innovators – but there is no need to even have it for any other company like a restaurant, or a motorcyle repair chain. We distrust the domestic investor in favour of the foreign investor – this needs to go if we really want to go local.

Our exporters refuse to sell the best stuff locally because you give them export subsidies like in textiles. So we import leather jackets with foreign names, but they could easily be made here. Don’t subsidize exports where local demand is big.

One reader said this applies to mangoes too. The best get exported. In some cases the best leather goods go abroad even if we in India are willing to pay 2x what they would get from the foreign player (who typically bargains strongly). Yet, to make the export subsidy benefit, we choose the export route. We should remove those routes of subsidies for stuff that has heavy demand here – our consumption is healthy enough.

This goes hand in hand with import substitution – local demand will create sub-industries too, where currently the exporter may import raw materials at lower duty, he could push to have those made in India to reduce the time and effort.

We hate our own companies. Reliance is a bad boy. But Amazon is good. Why? This is really not necessary – Reliance has stood up to everyone and yet, they are called nasty names. There should be official praise of the local folks, if you want us to get local.

I don’t think we like our corporates enough, other than some startups and the IT giants. Those too grew on govt largesse at some point, so we must work to build a better corporate culture that respects the work some of them have done.

Update: This point has made me the enemy of the free world. But let me say this:

My apologies if it’s misunderstood – I used Amazon and Reliance as examples of serious scale and why one is considered “good” and the other “bad”. I meant here that there is some criticism of it as “oh Reliance they abuse the system” – but then so does Amazon or other players, while playing in the legal boundaries.

I love Amazon and for a lot of things I like Reliance too, but in this context it was about something different – I was only saying that India does despise its own corporates – they use things like suit-boot-ki-sarkar, and anything that involves Adani or Ambani is only about corruption etc. which you cant defend beyond a point, it’s then ideological.

I feel to an extent the politicians push on further with this imagery that our corporates are dirty and crooks and all that – the whole bureaucracy also perpetrates it. This leads us to distrust anyone that becomes big in the system – whether its PayTM or Ola or the old big boys.

If we really want to go local – we should get other people to buy our rupee. We didn’t even let Iran use it to trade with other countries, others who unofficially have enough to trade with each other. Make it fully convertible, and what’s a better time than now?

Well, I wrote about it nearly 10 years ago, and we have the perfect crisis for freeing the rupee.

We have a podcast on the Stubborn Cost of Capital in India. Hear that one to see our detailed views on why we think rates remain too high.

Also: Use our waterways. Create much more passenger and cargo laden ships and ferries between our towns using the sea. Free the seas. Subsidize if needed, let the ships be built here after a few years of imports.

We are a peninsula. That’s the V shaped lower part of India that has ports from Gujarat to Mumbai to Mangalore to Cochin to Chennai to Vizag to Kolkata.  And then we have the rivers internally. Using those for passenger and cargo transport, will be good for an ecosystem we have hardly tapped.

We know that countries like China offer duty drawbacks. We should tax those products to offset, that the manufacturer would rather set up here, a local unit of sorts. Then, a few enterprising employees will set up their own companies to compete. We did it with car parts.

That’s kinda self explanatory. I argued against duties for things like steel – but if they sell here at lower than their home country rates, then that’s a little unfair to us, I admit. But I think it applies more for finished goods than raw material – from toys, to electronics to furniture.

Break up the IAS. Sorry but we also need industry insiders to run certain government sections (RBI, Finmin, commerce min etc). Don’t leave this only to a bureaucracy – to do that, you have to delink from the IAS.

This is not to say they are no smart people in the IAS. But they aren’t the only smart ones, and unless we say that they are not India’s only administrators (we can hire from industry too), they will want to keep those roles exclusively. It’s like having to derisk from Mumbai – you have to fight the people in Mumbai who don’t want you to.

We need much more judicial presence – courts, judges etc. Please use this majority to reduce the time to justice. That will help even with industrial battles, and going local and all that.

I’d like to be where our products are desired globally. We shouldn’t go local by diktat. But we should give ourselves a level playing field at least.

There is no diktat right now, but there will be calls for some. We should avoid that, but keep a level playing field. Should we not promote a Rupay when the giants of Visa and Mastercard offer little by way of choice to people in India? The concept of NPCI/UPI has changed India so much that they’ve overshadowed credit card payments many times over – and we’re reaped the benefits by having zero cost transfers. Why shouldn’t India promote more local services just as the others are promoted by their home countries?

I don’t think India should be forced to go local, but we should make it easier for us to. It’s still a lot more difficult to export than it is to import, and still a lot more difficult to manufacture than it is to trade. That gap can be bridged by simplication of policy, removing of the bad parts of labour and other laws, and by reducing red tape.