We wrote about the Franklin saga in debt funds (Read post) where six of their funds have been shut down since. The problem was:

In the process of doing so, they’ve created fear in unitholders of a lot of mutual funds, many of who have decided to sell some of their funds. The run exposes a lot of other practices that seem to be doing the rounds. And it’s not just Franklin.  Nearly every fund house with debt schemes are using complex mechanisms to skirt regulations. And, while legal, these are not really in the investors’ favour.

In this post, we won’t single out Franklin. But we’ll show you things we feel aren’t right. And also give suggestions for what can be done to fix it.

A quick summary of the issues:

Note: SEBI has set up some regulation as mentioned above. See our post. (No more AT1 Bonds, says SEBI)

We’ll start with Franklin. We got a lot of queries looking at this image in our last post: 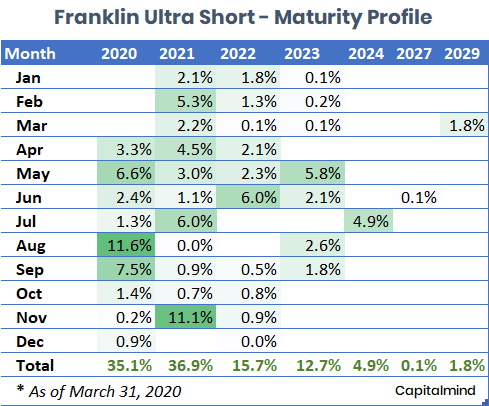 It didn’t cross our mind much. But how does this fund show a duration of less than 6 months?

The answer seems to lie in a look at the 2029 bond.  How do you get a 2029 bond – which has 9 years left to maturity – into an ultra short term fund that should have an average maturity of 6 months?

There’s a way. Some bonds in the fund are floating-rate. The 2029 bond too is one of them.  Meaning: the interest rate is not fixed. 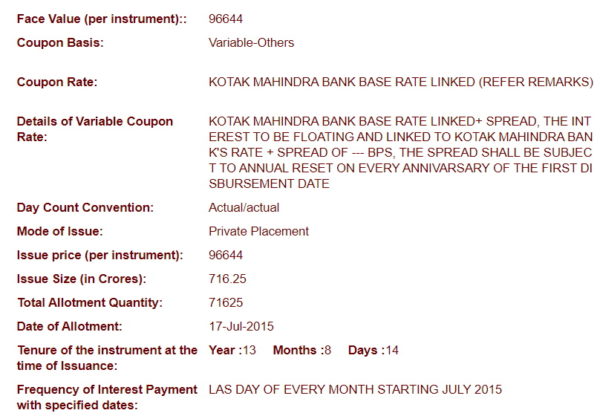 Now this sounds like it meets the letter of the regulation but not the spirit. What is the “time to maturity” of a floating rate bond?

The answer, muddied by a lot of unncessarily complex mathematics, is apparently “time to the next reset”. This is because, people who designed the math, were using Macaulay Duration to find a calculation of the  price of the bond, where this definition makes sense. But if you really want to know when you’ll get your money back, you should not use this definition.

The real thing that matters to you, in terms of getting your money back, is the actual time to maturity.

But mutual funds will take the Macaulay Duration definition to their best, and the 2029 bond can now be looked at as a 6 month bond!

This is a wrong way to look at regulations. If you can’t get your money back in 9 more years, the calculation should use 9 years as the number.

Mutual funds need to invest in specific average maturity instruments to be called short term or ultra short term etc. They instead repackage a long term bond as a short term one, using a floating rate bond which resets interest rate payable, say, every six months, and that will meet the regulatory norms.

What SEBI Can Do To Fix:

Typically bonds only pay regular interest, but the principal is paid at maturity.

A put option allows the bond holder to say give me my money (principal plus interest) now, and the issuer has to pay.  Think of this as a bank fixed deposit, that you can break without a penalty.

A call option means the issuer can tell the bond holder, here, take your money (principal plus interest). And go away. And the bondholder has to, even if he wants to continue. Think of it like a great Fixed Deposit that the bank breaks on its own and you can’t get back the same interest rate, but maybe rebook at a lower rate.

Put and call options are available only in a few bonds. Some have only calls. Some only puts. And even those are exercisable only on or after specific dates. That way it’s not like get out whenever you want – but only at specified dates.

Put option is good for a buyer in terms of figuring out when you’ll get paid. Call option isn’t.

Now let’s look at this portfolio of Kotak Low Duration Fund which needs its maturity to be between 6 months to a year.

They have about 2.85% in Syndicate Bank AT1 bonds.

AT1 are Additional Tier 1 Perpetual bonds. Recently, they were in the news because in Yes Bank’s case, the AT1 bonds were written down to zero. (Read our post)

These bonds are perpetual. The bank need not repay the principal, ever. The bonds have call options  usually after 10 years, which allow the bank to pay back principal and cancel the bonds. The bank doesn’t have to do it.

Given that, why would such a perpetual bond be allowed in a Low Duration fund? It would be a “forever” bond. But the current regulations allow mutual funds to take this as a short term bond!

Again, this is a way to technically comply with the regulation, but it really is a bond which you can’t get paid, so it may not meet the objective of the regulation itself.

How SEBI can Fix This

Note: On Tuesday, a truckload of AT1 bonds were sold in the market at very low prices (high yields) such as 14% for Punjab National Bank etc. This might have been because of Mutual Funds offloading them.

A bunch of funds have bought bonds that are not listed on stock exchanges. Unlisted bonds were disallowed by SEBI fo in October 2019, but funds were allowed to continue to hold them till maturity. Just yesterday, SEBI changed this rule slightly – that mutual funds can sell unlisted bonds to each other.

The problem? Unlisted bonds don’t have disclosure requirements, so you can’t find out much about them – but mutual funds have only been prevented from buying any new such bonds. The current bonds in their portfolio remain, and because of the rule, other mutual funds will not want to buy them. Yesterday’s rule change will only ensure that one scheme can transfer it to another one 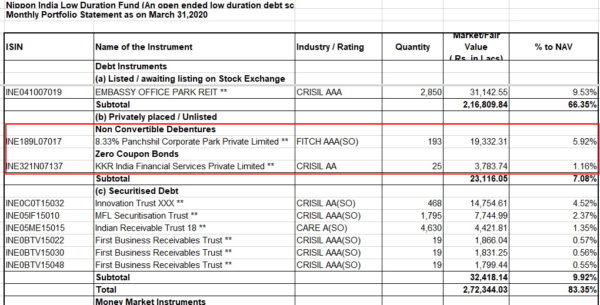 The Panchshil Corporate Park debenture is actually maturing in 2024 – a good four years later. This doesn’t sound like a great fit for a low duration fund which has to have average maturity of less than one year. While the fund couldn’t sell this debenture, they might be able to transfer it to one of their other funds.

See that familiar Pune-Solapur Expressway Bond? That was in Franklin as  well, and it’s a 2029 bond. It’s unlisted. What are these doing in an ultra-short-term fund? And now, because it’s unlisted, getting rid of it is near impossible.

How SEBI can Address This:

The “Zero coupon bonds” section has this one entry: Adarsh Advisory Services. What’s this?

The problem is this: mutual funds lend to a company that has no cash flows, only on the basis of shares as collateral. This was a huge problem in the case of Zee promoter entities, which we warned about first in 2015! This turned sour, horribly, landing losses to investors in a number of funds who held the bonds of the promoter companies – as investors in Aditya Birla funds, to HDFC Funds to ICICI funds, people saw potential losses. Why? Because the share prices fell sharply, and when the funds tried to sell to recover their money, the prices fell even more, and there was no other way to recover any money as the underlying companies weren’t profitable or even had cash flow.

Given that we have seen this recently, should funds not be more careful? SEBI has already increased the cover amount to 4 times now and this should be good enough for now. However given that there is collateral but no cash flows or creditworthiness (negative net worth!) the underlying bond is at the mercy of stock prices, with no knowledge of the end-use of the funds at all.

What SEBI can do:

Funds Borrowing Money, And Then Hitting A Wall

When you redeem fund what happens?

The answer, for liquid funds, was to force them to buy a certain number of government securities that are always liquid.

The problem is in other debt funds. Especially where you can exit every single day. You can’t avoid this problem, but maybe there’s a solution.

What SEBI can do:

How This Will End

This will end, in some way or the other. But see this:

Every crisis is an opportunity to reform and make things better. More regulations won’t help, but at this point we have an entire market that is nearly frozen because of massive redemptions. And those redemptions are coming around because of lack of trust. And the lack of trust is because some funds have tried to get around the rules by using innovative financial machinations. Which have now come back to bite, and so some have shuttered redemptions completely.

Note: SEBI has set up some regulation as mentioned above. See our post. (No more AT1 Bonds, says SEBI)

Thanks to Dheeraj Singh for the inputs on this post and the mutual fund industry.