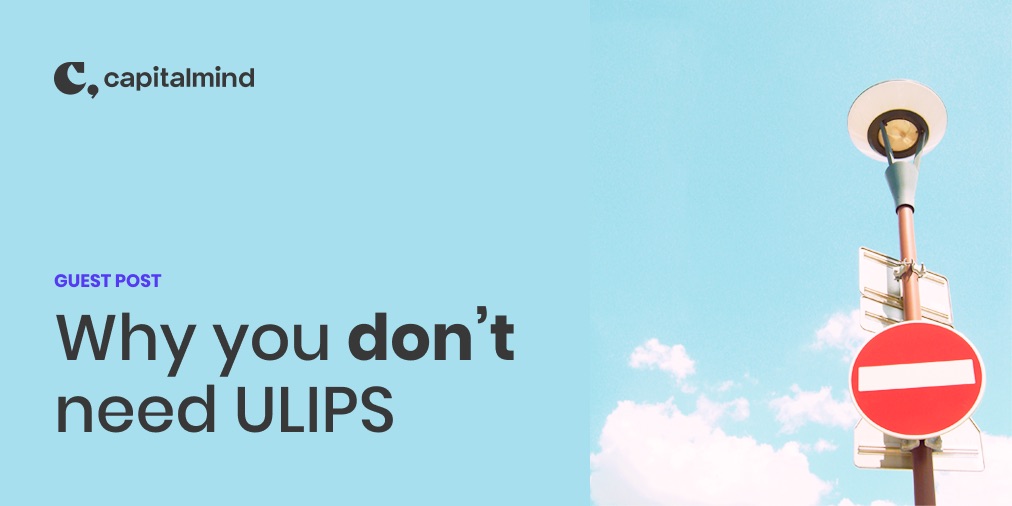 This is a guest post by Rajeev Raghu. He works with Yes Bank in their internal consulting team, and is based out of Mumbai. He likes to read about management, economics, finance among others. His Twitter handle is @rajeevraghu85.

The life insurance sector in India has been growing at 11% – 12% for the past few years and in 2019, this sector would have completed its 6th year of steady growth.  However, about 75% of the country’s population still does not have any form of life insurance, indicating that we are miles behind developed economies. This can be partly attributed to the fact that you normally wake up to this thing called “insurance” around January of every year when your office HR reminds you to submit proof of your investment declaration. The folks in the workplace are running around scouting for some plan to meet their tax benefits under Section 80C at the last minute. (As we write this, there is the option of choosing the new tax regime without these exemptions). The friendly neighborhood uncle or a relative advises you to go for a ULIP (Unit Linked Insurance Policy) since it is a combination of insurance and investment – you get an insurance cover for death, market-linked returns on maturity if you are alive, and you also get the tax exemption benefits. So with these “triple benefits”, ULIP sounds like a blockbuster product. Your deadline for proof submission is fast approaching and you go ahead with ULIP with this basic research. But scratch the surface and it might not be all hunky-dory beneath.

ULIPs are policies wherein a small portion(~30%) of the premium paid is used to provide life insurance and the other bigger part(~70%) is invested in the market via equity, debt or hybrid funds as per the user’s choice. This invested part is similar to a mutual fund with units allocated and NAV. ULIPs have a lock-in of 5 years, so it is completely tax-free if the money is withdrawn after the lock-in period of 5 years. If the policyholder dies during the term of the ULIP, the amount received by the nominee on death (called sum assured) is also exempt from tax. At the end of the policy term, the life cover, that is the sum assured, ceases to exist and you will only receive the fund value as maturity benefit.

A term plan, on the other hand, is a pure life insurance plan – the premium paid is entirely used to cover the risk of death. There is no assured maturity benefit (if policyholder is alive) in a term insurance policy, and the sum assured is paid out to the nominee on the death of the policyholder. Since there is neither a maturity benefit nor a partial withdrawal during the course of the policy in a term plan, ULIPs are perceived to have better return on investment compared to term insurance.

Let us compare the premiums and sum assured for a simple term plan and two ULIPs.

Our user in this example is a salaried male employee aged about 35 years, earning Rs 15 Lakhs per annum. He intends to have a death coverage of Rs 1 Crore, and coverage up to 60 years i.e. he will be paying premiums for the next 25 years till the age of 60. 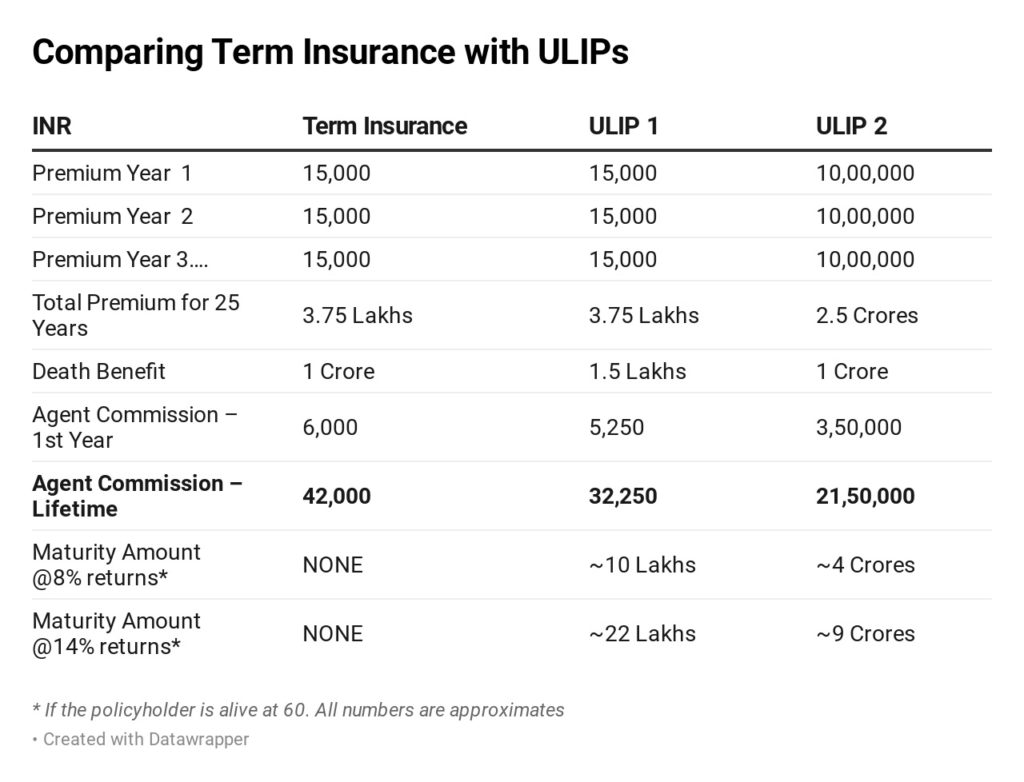 While there are a few benefits of ULIPs such as disciplined payments in the form of SIPs, tax benefits via Section 80C etc, there are many issues with ULIPs that far outweigh the benefits.

Since only a small portion of the premium is used for death coverage, you end up with a much smaller risk cover. The sum assured in almost all of the ULIPs is ~10 times the annual premium, or Rs 1.5 Lakh in the case of ULIP 1. Put this in perspective with what experts say on having about 7-10 times of your annual income as a general rule of thumb for calculating insurance cover. In the above scenario this translates to about Rs 1 – 1.5 Crore as the requisite amount, for which you need to opt for ULIP 2, paying about Rs 10-15 Lakh as annual premium. (Remember you are earning Rs 15 Lakh!).ULIPs offer the higher of sum assured or fund value upon death of the policyholder, and for the first 5 years it is almost always the sum assured only. The upside is in the case of a prolonged bull run in the market for a few years and the policyholder’s death occurs about 10-15 years later. Even then, in the case of ULIP 1 the policyholder only earns ~10 Lakhs assuming 8% Returns on maturity, which is still way below the suggested cover. This could be higher depending on the market, but in general does not even exceed 1/4th of the risk coverage of a similar term plan.

Instead, if you intend to cash out the maturity amount at 60 and purchase a new term plan, there is sad news here as well. A new term plan at that age is either too costly or simply not possible to get, and you are left with a gaping hole in terms of risk coverage.

For similar premium amounts, the ULIP coverage tends to be only a fraction of that of a term plan.

There is limited flexibility in ULIPs. While you can choose between funds (conservative/ aggressive/balanced) within one policy, ULIPs don’t allow the investor to change the insurer or the policy and an investor gets stuck with a policy till the end of the term. To opt for a new ULIP plan the buyer has to buy a new ULIP plan, surrendering the old plan. If you surrender the policy before five years, there are multiple deductions because ULIPs have a lock-in period of five years.  However, the fund value on surrender date less deductions is paid only at the end of the 5-year term and not immediately. The tax deductions claimed will also be treated as income in the case of premature surrender. Exiting immediately after the 5 year lock in might not be the most efficient choice financially since a lot of the charges (Mortality Charges, Higher Initial Commission etc) are levied in the initial 5 years. So you bear these costs again if you opt for a newer policy.

ULIP is a long term product, and you need to give your “investment” enough time (~10-15 years) in the market to enjoy the benefits of compounding. Also, you need to pay the premium every year even after 5 years to continue getting the coverage, else the policy will lapse.

Contrast this with a Mutual Fund SIP where you can just stop or pause your payments for a few months in case of a financial crunch. Just to note, there are ULIPs with a 1-time lump sum premium option as well.

We saw that for similar coverage, the premium in ULIP is many times higher than that of a term plan. This translates to higher commission for agents, since that is a % of the premium paid. So clearly the agent is keen to hard-sell the ULIP and not a term plan. The investment side also has the usual charges associated with Mutual Fund Plans like fund management fee. The “Benefit Illustration” guide gives these costs in full detail. Since 2018, online ULIPs have been introduced with zero commission and low charges, and this might be beneficial for the internet savvy generation but not for your common man in the rural hinterlands where insurance still largely runs as a “push product” on the back of the distribution network of the agents.

As users began to observe that the returns were in low single digits, they started surrendering the policies. However, the surrender charges were pretty high as well. These led to a lot of clamour about insurance mis-selling in the first decade since 2000, prompting the regulator (IRDAI) to change the rules around ULIP in 2010 like minimum sum assured raised from 5 times the annual premium to 10 times, increase in lock-in period to 5 years from 3 years, capping the % premium as commission etc.

However, some statistics below highlight that ULIPs continue to get purchased, and contrastingly the share of ULIP premium is actually increasing! There are some other complaints like NAV of ULIP not accounting for all charges as compared to Mutual Funds, lack of any industry-standard benchmark.

Are there any good ULIPs?

Post the 2010 reforms and the reputation of ULIPs as “costly” products, online ULIPs with low charges have been introduced. Some of the features include scrapping policy administration and premium allocation charges, bonus units allocation, return of mortality charges etc. A few such policies, with their past performance and sum assured are listed below. 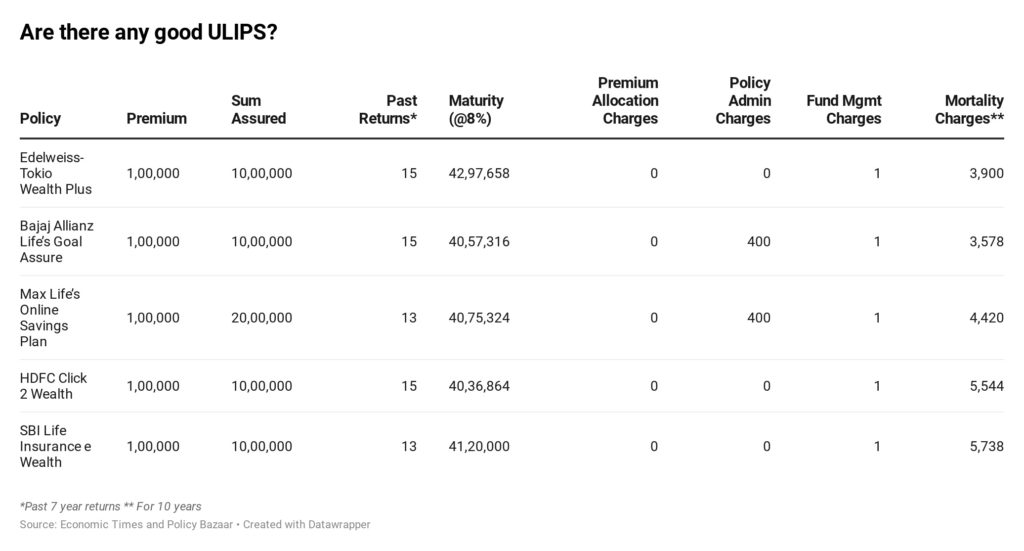 However as the above table shows, from a pure protection point of view, these new ULIPs also offer only a fraction of the term plans. The minimum premium is also pretty high for some of the above schemes (Rs 36,000 for Max Life). The other limitations mentioned earlier on limited flexibility, policy lapse on premium stoppage etc continue to persist.

The low-risk coverage and lack of flexibility are the biggest factors working against ULIPs. An insurance company specializes in risk underwriting, while an asset management company(Mutual Funds) specializes in maximizing shareholder returns. These are completely different skill sets, and it is not wise to buy something that is not a core competence of the company. Insurance is to protect you from the vagaries of life, and for this protection, you need to spend money. It is an expense and needs to be treated as such. There are other asset classes for investment – stock markets, real estate, even gold (if you must). Just be clear if you’re paying for investment returns or protection.

A combination of a term plan and a simple Index Fund will most certainly take care of your basic insurance and investments needs much better than that of ULIP in the long term.

At Capitalmind, our Long-term Large Cap exposure recommendation is a semi-passive combination of the top 100 Indian and top 100 US tech companies, what we call the “Market Index Portfolio“. For active equities exposure, we recently revamped our MultiCap and Momentum Portfolios. Sign up for CM Premium to get access to all our model portfolios and vibrant subscriber community on slack.