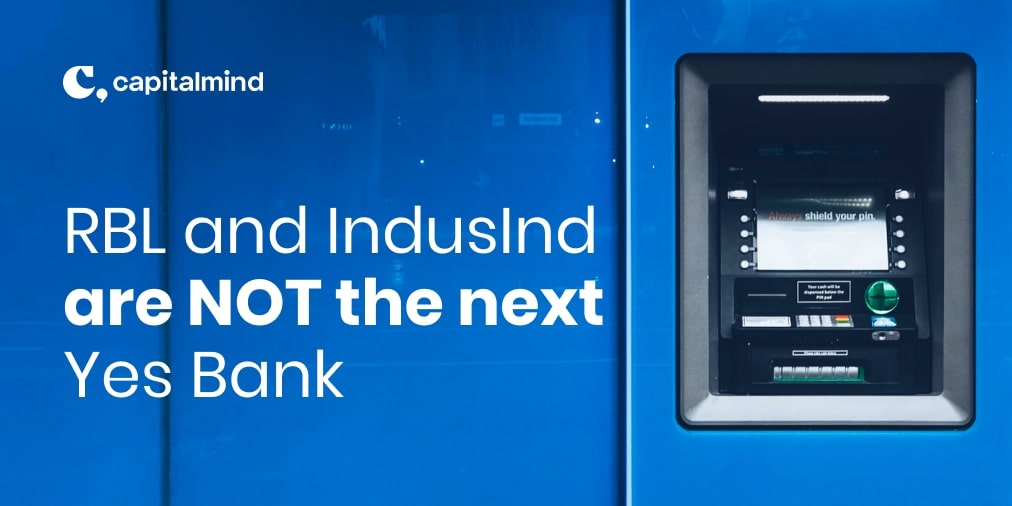 The Yes Bank fiasco made all the other smaller private banks look bad. We think, unfairly, which is the point of this post.

Yes Bank had undisclosed NPAs. After repeated failed capital-raising attempts, RBI stepped in and placed a moratorium. And that scared depositors.

Here’s a thread on our comprehensive analysis of @YESBANK by @deepakshenoy and team, as events have unfolded going all the way back to 2017.

The fallout of the Yes Bank saga. Rumours about the health of other private banks. RBL and IndusInd, among others.

RBL even came out with clarifications that depositors money is safe. But the rumours have refused to die down.

So, are RBL and Indusind deposits safe?

According to Sep-2019 results RBL has a balance with RBI to the tune of Rs 3,600 Crs. Also it has Rs 2,800 Cr as balance with the bank for money at short notice. The number might have slightly deviated by now, but on a baseline, it would have still maintained roughly Rs 5,000 Cr as cash in hand and balances with RBI.

All in all, RBL Bank looks healthy.

This coves nearly cover 50% of deposits. The balances are apart from some 8,000 Cr other investments and another 19,000 Cr fixed and other assets. And the rest 50% can be covered by selling the loan book.

Even at a 45% discount, Indusind will have enough cash to cover all the deposits. 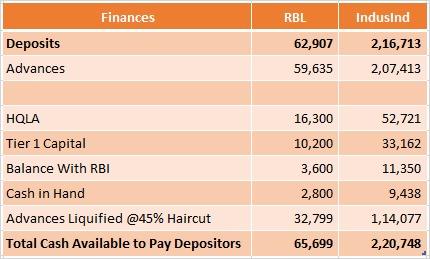 So, What Can Go Wrong?

Yes Bank had substantial amount of liquidity for paying its depositors. A drastic increase in NPA’s sent things spiralling. A huge increase in NPAs will require a proportionate amount of provisions. These provisions will eat away Tier 1 capital.

RBI currently has mandated the Banks to maintain at least 7.38% as CET1 capital. CET1 and additional Tier1 capital together make up for Tier1 capital. Once the level is breached, the banks need to raise more money to plug the gap or else RBI will step in and put the bank under prompt corrective action framework (PCA).

RBL and Indusind have currently CET1 ratio of 14.6% and 12.80%. Well above the 7.38% benchmark. They have substantial cushion to cover a sudden rise in NPAs.

If All Depositors Start Withdrawing

If the depositors start taking out money, then banks will first liquidate their high-quality liquid assets (HQLA). Then, they will try and use the cash balances and other investments. When those limits are hit is when RBI steps in and puts a moratorium around withdrawal limits.

Banks also need to time to sell their loan portfolios. This is not an easy task. The buyer will also want to check all credit history. So until a substantial chunk is liquidated and put aside for depositors withdrawal, RBI will keep imposing moratoriums.

Panic withdrawals at such times only worsen the situation.

The BBB and Below Book

RBL has nearly 6.1% of its advances in BB+ and below (meaning they have very high probability of slipping into NPAs). 6.1% of the current loan book turns out to be roughly Rs 3,600 Cr. 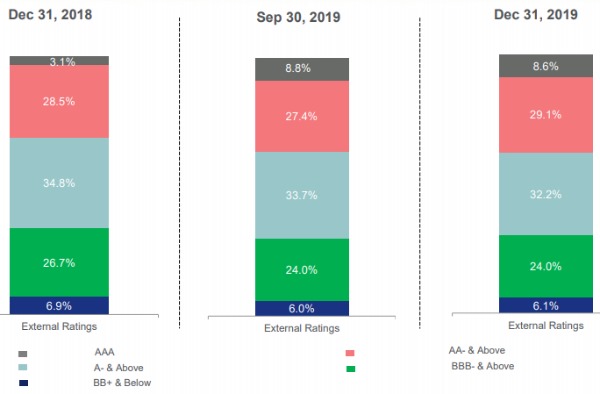 Let’s assume that half of that turns into NPA i.e nearly Rs 1,300 Cr. Considering a 100% provisioning still leaves RBL with enough Tier 1 capital to meet the RBI benchmark. Currently, RBL bank has a CAR of 15.66% with a Tier 1 capital of 10,200 Crs

Why It’s Different This Time

The problem with Yes bank was under-reported NPAs. Even after RBI did an audit and asked Yes Bank to report the divergence as NPAs, Yes bank pretended like they did not exist. [we wrote about this too. find it in the tweet thread above].

Yes Bank was a ticking time bomb. It was a question of ‘when’, not ‘if’.

In Q3FY20 results, their gross NPAs jumped to 18.87%, from 7.39% in Q2FY20. Not because 11% of their loan book suddenly defaulted. They just finally decided to report things as they were, well mostly.

RBL and Indusind are different. They have their NPA problems, but we don’t expect them to balloon 2x overnight. Any potential impact will be to their profitability, not their survival.

The Side Effect of Yes Bank Fiasco

Bank failures are not like regular corporate failures. Banks going bust shakes depositor trust. Even RBI guarantees don’t seem to count for much when that trust is in short supply.

Customers will still need to maintain deposits. When in doubt, they will prefer PSU Banks, since the biggest promoter, the Government of India can’t afford to let them go bust. That’s the perception. In reality, both private and PSU banks are regulated by the RBI.

PSU banks are already sitting on deposits without lending out. Advance growth for PSU banks has been flat or negative for the most pat of the year. More deposits will only result in money being parked with RBI rather than coming back into real economy.

The major difference between banks and NBFCs is, banks can take deposits and NBFC cannot. Fixed-term deposits along with current and savings account (CASA) gives banks access to low-cost funds.

This might increase the funding cost small private banks but will not make much of dent on their profitability as their NIMs are comparatively high enough.

Bottomline: RBL Bank and IndusInd Bank are not at the precipice Yes Bank kept stepping back towards. We don’t think there’s a credible risk of them going the same route. Banks operate on depositor confidence. In their case, even if that gets shaken, they take a hit to the bottomline and live to fight another day. Depositors in these banks can rest easy. Shareholders, might take a while before they have reason to celebrate.

For more such insightful articles and equity and fixed income portfolio strategies, become a premium member today. Use Code RESET21 to get 21% off regular price if you sign up before 30th April.