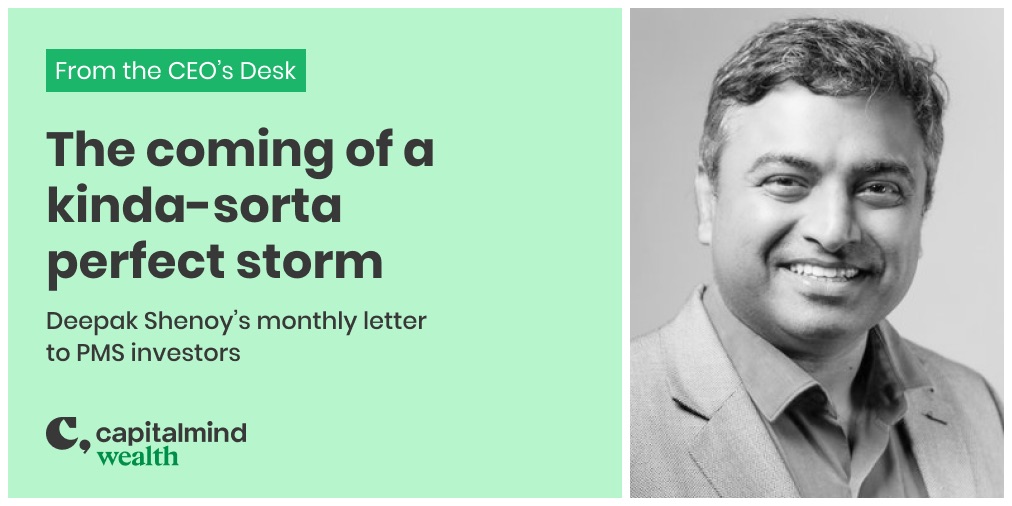 The early part of March brings us the return of serious volatility, mainly from three large factors:

These warrant attention from the perspective of first order effects and then, second or third, which is where the real opportunity is.

You’ve all got enough whatsapp forwards on how the Coronavirus will wipe out civilization unless you wash your hands regularly. So please do, and I won’t bore you with details. The virus may be much more deadly when it hits our country, or it may just not gel with the temperatures here. Whatever it is, what really will happen is: Panic.

If a person down the road gets it, you will feel that fear within you. Your apartment building will start to spray all visitors with sanitizer. Schools will be shut, perhaps in advance of the summer holidays. People may reduce congregations, offices and factories will close when cities see the impact, and many of us will have to self quarantine. The disease itself may not be very dangerous – by definition, if it killed too many of those it infected, it wouldn’t spread so fast. The most at risk are the elderly and those with medical conditions, but if anyone gets it, they’re going to be quarantined for a few weeks even if they recover fast.

The panic has economic impacts in the near term. People may not eat out. They might not watch movies in theatres. Restaurants may see lesser traffic. Activity in factories and offices may reduce. This will happen in India, no matter how hard we try, simply because it’s the playbook that the world is using, and we won’t have a choice.

But there’s a second order effect. Once the system runs through the impact, and this could take two or three months, we’ll see a renewed interest build up. People forget quickly, so eating out will resume, as will theaters, and offices and so on – and some of it will encourage more purchases. (For instance, if you can’t take public transport or an Uber because you’re scared of the virus, you might want to get yourself a personal vehicle after the crisis is over)

Also, authorities have to respond. We believe they’ll do this by easing liquidity and perhaps by cutting interest rates. How much lower can we get? The answer lies in what’s stopping us from cutting them: the fear of inflation. Onion prices are back to new lows, and chicken/egg prices have fallen after the coronavirus fear created a wave of vegetarianism. Crude prices fell all through February and massively in March. And at the same time, growth is stunted because of the stall in economic activity due to the virus panic. There is only one way for interest rates to go – down. The next monetary policy meeting is in April, but a rate cut could easily happen earlier.

The Yes Bank situation has been lousy too. We wrote a piece on how the bank’s deposits are safe, with SBI taking on 49% equity. Yet, the fears are now different. Will my bank, whichever it is, be restricted next? Should we all just put our deposits in PSU banks? This has to be answered when the moratorium on withdrawals (of Rs. 50,000) is lifted, most probably by next week.

The damage however has a second order impact. The strongest banks will get stronger, and those perceived to be weak will slowly see a trickling out of deposits. Another impact is on debt mutual funds, which now have over 3,000 cr. invested in certain bonds of Yes Bank. Those bonds, called Additional Tier 1 bonds, have been written down to zero, a whopping Rs. 8,400 cr. of them.

These funds have had to write them down to zero. (Note: None of you had any impact with the debt funds. We have not lost any money on our selection of debt funds to date) Those mutual funds will see a massive exodus of investors, who will take their business back to good old bank deposits. Because you don’t know who else to trust.

There are many third-order effects here: for one, a higher cost of borrowing for corporates that would otherwise have taken money from mutual funds.And then, a fear of AT1 bonds (the ones that were written down) to the point where banks can’t issue them any more, and will have to look for different ways to shore up capital.

Add to this the oil shocker. Saudi and Russia have battled it out in OPEC, but the common enemy now is US Shale, which has quickly become a force in the world oil export market. Saudi is going in all guns blazing, saying it will cut prices and bring the US shale to its knees. And oil prices are down to $36 a barrel, from $50.

But this is a true case of what doesn’t kill them makes them stronger. US Shale is strengthened by bankruptcy protection. If the first set of shale oil producers needed to invest $100 million to build a well, they borrowed the money through “junk” bonds (high yield) and could break even at about $80 per barrel.

When oil fell below that in 2014, they went bankrupt. The buyers of the junk debt took a “haircut” and the bankrupt oilcos saw buyers who paid 30% lower for them – say $70 million. Again, this was financed by more junk bonds. This brought the breakeven point to $50 per barrel, since the acquisition cost was lower, and shale oil takes much more in fixed cost than in operating costs.

A few rounds of these have happened. The US is very quick in bankruptcy resolutions, and US shale can be stopped and restarted fast. The result? A series of bankruptcies have brought breakeven prices to as low as $25 per barrel. Add to this a new Permian basin pipeline that makes it even easier to transport the oil/gas to trading locations, and you have far better economics today.

What Russia or Saudi will do with lower priced oil is to introduce, perhaps, another round of bankruptcies. And that will resolve. And the new companies that buy them will have an EVEN lower breakeven point. Remember, Saudi needs $60 just to balance its budget. At the current $30 levels, the only thing that will stop people from protesting on the streets is, ironically, the coronavirus.

The impact of low crude prices for India is immense. We hope they’ll reduce pump prices, but plastics will fall too, as will input prices of a lot of industries. And then the government will probably take a part of the largesse by increasing some taxes, which might allow them to start spending again. The short term impact is that wow, the world will hit a recession, but the longer term impact is that it makes life a lot better for India.

What happens to markets? They’ll fall and rise and fall again. We expect 5% days to be normal, and in both directions. In the meantime, we’ll rework portfolios to take advantage, and have recently generated cash in some of the portfolios too. We have been more resilient on the downside, and we expect to take advantage on the upside too. The long term requires a calm mind, and the ability to take advantage of panic but not too early.

And yes, this is a good time to start investing again. It will take three to four months for the markets to find their way, but if you consistently invest in the next few months, we think it’ll be a good entry point for the long term.

At Capitalmind Wealth, we’ll do some adjustments to the portfolios for some level of tax harvesting and to take advantage of the market movements. However, we will still retain dry powder through the month of March.

While the next few weeks will see volatility, please feel free to connect with us if you’re worried in any way. And if you have Yes bank accounts, be assured you will be safe, but it could take some time to resolve. And we’ll sign off by reminding you, like the unending phone ringtone does, to wash your hands.

To a more healthy country,