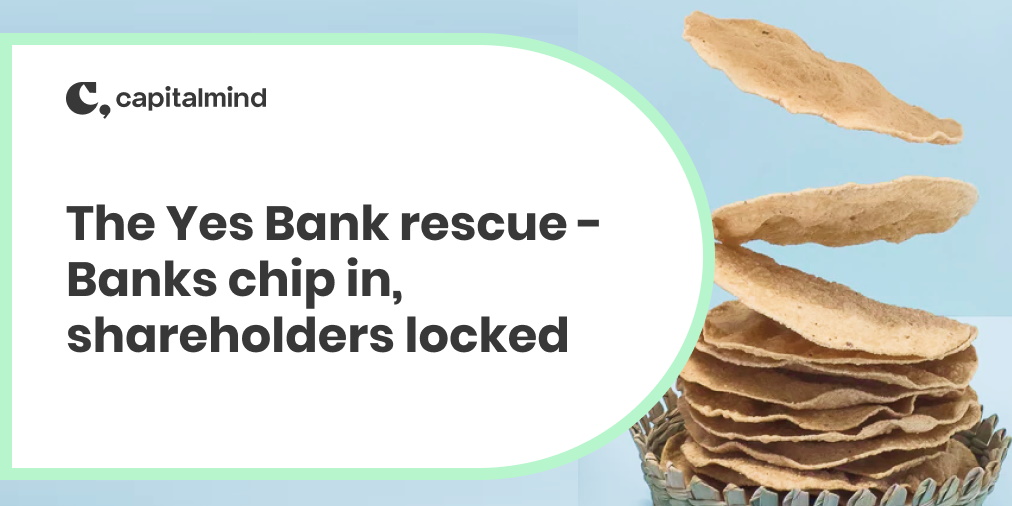 The Yes Bank Saga takes another step forward, with Indian public and private sector banks taking on 80% of the equity and attempting to revive the bank. Here’s a few salient points:

A number of banks will add capital to Yes bank, which will result in the following structure: 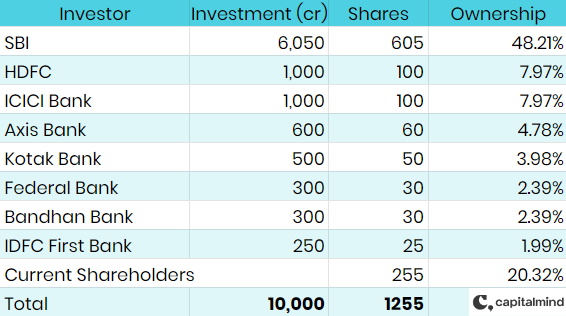 Separately, the bank will write down completely, the Additional Tier 1 (AT1) bonds issued earlier. 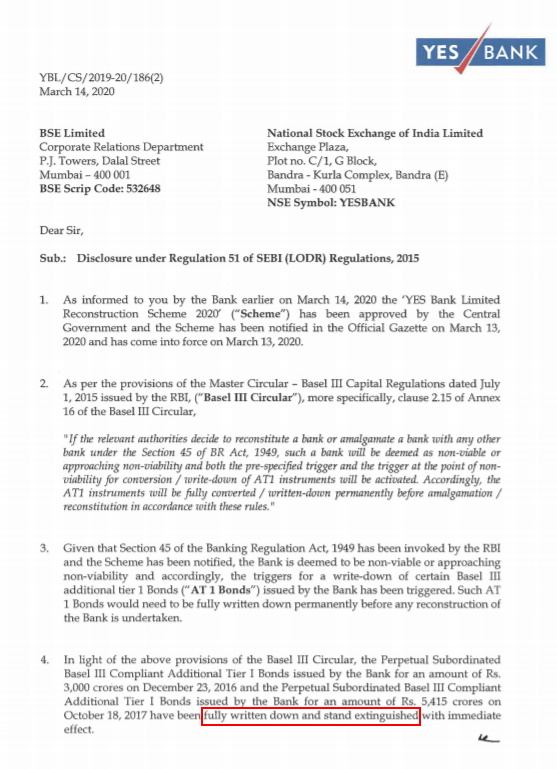 We will write below on AT1 bonds, but these bonds are allowed to be written down if the RBI goes into resolution in a bank.

This gives Yes Bank Rs. 8,415 cr. profit. Why? Because when you write off a loan that you need to repay, it’s profit for you. Effectively it’s like the other party giving you this money free of cost. AT1 bonds are like that – when the bank writes them off, bond holders get nothing at all – so it’s a profit for the bank.

That profit will add to the bank’s capital reserves and give it more health. The above two measures – new capital plus AT1 write down – will add Rs. 18,415 cr. to the bank’s equity.

Shareholders locked in for 3 years (75%)

All current shareholders as of Friday (holding more than 100 shares) are locked in for another three years with 75% of their holding. If you held 1,000 shares, you can only sell 250.

This creates problems for index funds (Yes bank is in the Nifty and shares will have to be held for three years). Also, for retail holders who have sold on Friday (since the shares may not have left their account). And then, for any intermediate holders like the clearing corporation etc.

Remember that some 5.9 cr. shares were traded as “deliverable” on Friday.  Many of these cannot be delivered, and the brokers/retail/clearing corporations may have these shares in their accounts – and this will cause some sort of delivery situation for the settlement on Monday. Let’s see how that evolves.

Also, there’s no clarity on what happens to people who have borrowed Yes Bank shares and shorted them. They may not be able to deliver.

You couldn’t withdraw deposits more than Rs. 50,000 till now. This will be lifted as a restriction, from March 18, 6pm. After that you can withdraw to your heart’s content.

Many of you will ask if you should withdraw, even though so much more capital is available. The only correct answer is: do what your heart tells you to do. There’s no point creating panic, because the RBI will stand behind the bank depositors and ensure that anyone withdrawing will get what they want.

Results were announced yesterday too. It was horrible:

Anyhow, what this means is that Common Equity Tier 1 Capital will go back to 7.8% after the capital infusion. These are horrible results.

Is There Value in the Bank? For Shareholders?

After the moratorium, some deposits will leave, but let’s assume for a moment that the bank is able to retain enough depositors. Then, what’s the value look like?

But the important thing is: the number of available shares to sell in the market will be very low. For people who are short, this could be a major problem as borrowing will be difficult, and buying in the market will push up the price. Plus a settlement failure will create a demand in subsequent auctions. So we could easily see a situation where prices can be very volatile on the upside for at least a few days.

(Any upside jump is good because it will allow the investing banks to quickly recoup part of their investment if they choose to sell upto 25% of what they invest, which they should)

Too many things are happening. Let’s see where the situation goes. Overall, this is a step in the right direction – a rescue in which both Public Sector Banks and Private Sector Banks have participated. AT1 bond holders will hate the write down and if they have been missold the bonds, they should go to the ombudsman or to consumer court. In general, the Yes Bank Rescue can still impact banking system sentiment and the bank might still go further down. But hopefully if it does recover, so will sentiment about banks and we can slowly trudge back to normal over the next year or so.