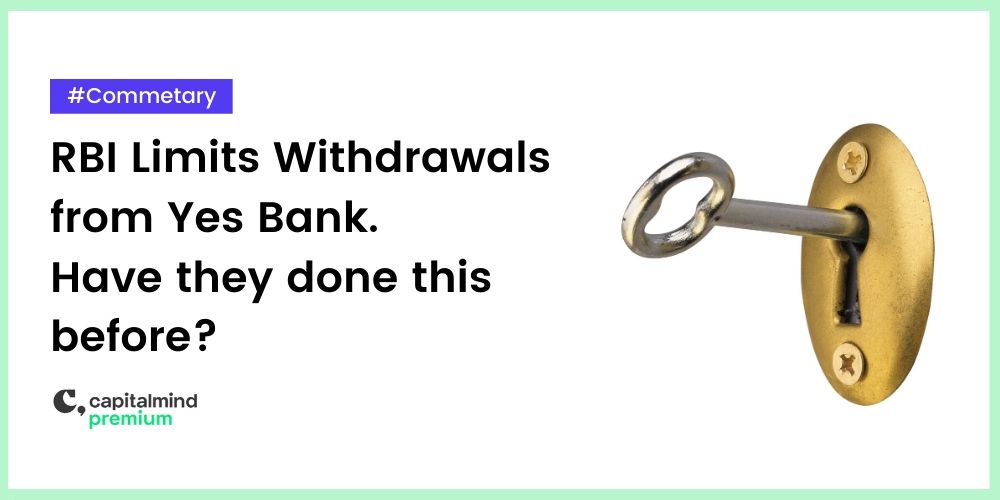 It came as a shock, on the evening of March 5, 2020, that Yes Bank was placed under RBI’s moratorium. This means:

This is till April 3.

Why? Will You Lose Deposits?

In October 2019, we wrote that depositors might be safe in Yes Bank, but shareholders may not be. And that if the bank doesn’t raise capital, RBI is likely to merge the bank forcibly with another bank. (Read post)

A moratorium doesn’t mean the loss of deposits. It means that a temporary limit is in place until the bank is “resolved”.

We don’t know the specifics, but it’s been said that the bank simply didn’t have any money to pay for its obligations, and that RBI took the action to prevent a larger run on the bank. Noteworthy is the fact that a certain bond was maturing on April 5 (a perpetual bond) which, if not paid out, would have resulted in the bond seeing an upward revision of 1% on the interest rate and the bank could never pay back that bond henceforth. Things like this can easily cause cascading defaults.

Whatever the reason, RBI has fired the board, and appointed State Bank of India (SBI)’s CFO to administer Yes Bank going forward.

RBI has been vocal about supporting depositors (India has not seen a scheduled commercial bank hit depositors) and in it’s statement, says:

The Reserve Bank assures the depositors of the bank that their interest will be fully protected and there is no need to panic. In terms of the provisions of the Banking Regulation Act, the Reserve Bank will explore and draw up a scheme in the next few days for the bank’s reconstruction or amalgamation and with the approval of the Central Government, put the same in place well before the period of moratorium of thirty days ends so that the depositors are not put to hardship for a long period of time.

There is not just a statement that says depositors will not lose money, but also that they plan to resolve this before the 30 day moratorium ends.

Have They Done This Before?

So How Did That Go?

Glad you asked. The situation there too was fluid for nearly three years, after the promoter of Global Trust Bank (GTB) was dinged by the RBI and forced to resign after the RBI found there was unbridled lending to brokers and capital markets).

During the period of moratorium, the bank will be permitted to make only those payments that have been specified in the Order of Moratorium and the depositors of the Global Trust Bank Ltd. will be permitted to withdraw up to Rs.10,000 (Rs. ten thousand only) from their savings bank account or current account or any other deposit account through any of the branches of the bank.

This was a three month moratorium but they acted really fast.

The Weekend Rescue By RBI: Draft Merger With OBC by Monday

24th July 2004 was a Saturday. Stock markets were closed when the announcement came in. Debt markets too, were closed.

The first thing that RBI did, was that on the 25th it reassured depositors that they won’t lose money.

RBI reiterates that the objective of the moratorium is to protect the interests and safety of funds of all depositors. Necessary actions are being initiated to ensure the return to normalcy.

All the branches of Global Trust Bank Ltd, will continue to remain open as per their normal working hours to help their customers and enable them to make the permitted withdrawals.

RBI stands by its assurance to meet any requirement of cash at the branches of the bank for making permitted payments under the Order of moratorium .

It is also clarified that the D-mat accounts and Safe Deposit Lockers of customers will be allowed to be operated as usual.

The Reserve Bank of India has set up help lines to assist the members of public at Mumbai and Hyderabad.

Imagine, the RBI sent this out on a Sunday.

On Monday, the 26th of July 2004, it then said that GTB would be forcibly merged with OBC (Oriental Bank of Commerce). They already had a draft merger agreement ready for view. (Read post)

Importantly, they also provided that depositors would be carried to automatically become OBC depositors.

How Long Did They Take To Merge?

The Draft Agreement was on July 26th.

The full merger was completed on August 14th, less than two weeks from the start of the moratorium. All GTB branches became that of OBC, and you could withdraw or operate as much as you wanted.

This was good and remains the only template we have. Hopefully Yes Bank will resolve this fast.

What Happens to Yes Bank?

You should assume the bank will soon not exist independently, and in all probability will find a buyer soon, which might be State Bank of India (SBI). Yes is very large, with last reported results showing 200,000 cr. in deposits and more in loans.

How soon will it go? We hope a draft agreement is in by Friday or Saturday and that we can see an approved merger by next week.

Given by the RBI words and the GTB history, it’s likely that:

Only if we let this fester. If the merger goes through fast, there will be no major problems.

But with this (and the earlier situation with PMC Bank) people will have a renewed fear of all private banks, so there might be a mini run on them. Stock prices should hurt in the meantime.

Also the banking system is more integrated and connected today, so the interconnects may cause a trading freeze in certain markets like interbank repo, because of a trust deficit.

Stock markets don’t need much of a reason to turn around and lie dead, and they will probably do the best drama queen act for this year so far.

Action to be taken?

You can’t exit FDs or deposits, so don’t. Try and take out the 50K available, though.

Do not panic. We still believe deposits are safe.

You will see debt mutual funds with losses tomorrow. Franklin Dynamic Accrual, for instance, had about 56 cr. (1.4%) of the Yes Bank AT1 bonds, which is likely to be rated “D” tomorrow. That will hurt the price (a hit has to be taken) and we might even see a further segregation of these bonds into separate funds. More on that tomorrow, but many funds will have been hit.

The share price is not very relevant now, but it’s likely to go as close to zero as possible. GTB shareholders got zero, which might be what SBI gets to pay for Yes.

Lots of action will happen in the next few days. We’ll try and explain. Meanwhile, we’re on twitter @deepakshenoy or @capitalmind_in.