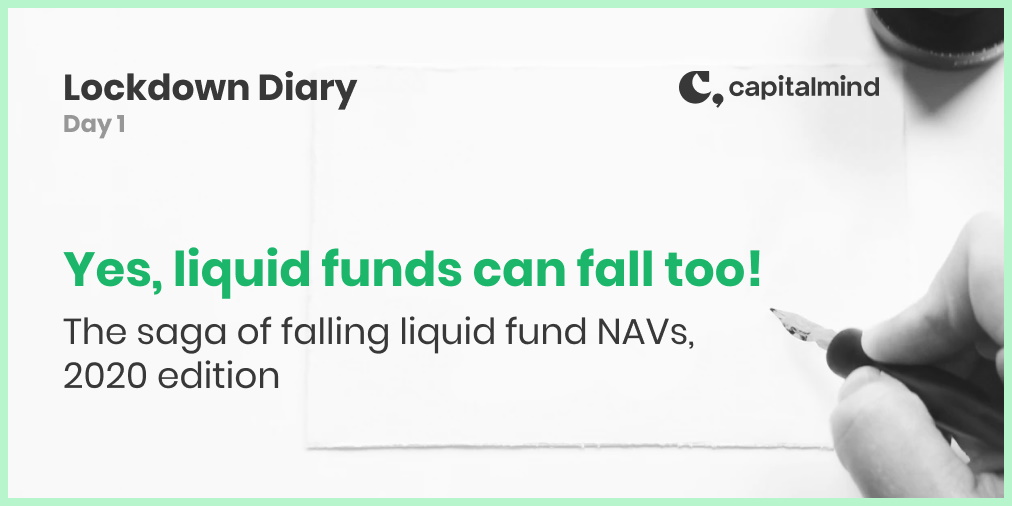 [This is a Premium UNLOCKED article]

We’re going to write a small piece for you every single day of the Covid Lockdown. Stay safe and read it at home. We’ll try to keep it simple, entertaining and informative. And try to use shorter words. And sentences. Like. This.

For the last week, liquid fund returns have been strangely negative. What’s going on? Has the market lost its senses?

Liquid funds and ultra-short/short duration funds invest in debt that matures relatively soon. They can buy government debt which is t-bills and the like , but the yields there suck. So they operate in the CD/CP market where lots of close-to-maturity paper is bought and sold by corporates, NBFCs and other banks.

Liquids usually don’t lose money. The idea is to buy something that matures so close that you are unlikely to see any price fluctuations. Why is that? If something that’s worth Rs. 99 is going to pay us Rs. 100 in 100 days, then you should expect that if nothing else changes, the price on day 1 will be 99.01, on day 2 will be 99.02 and so on until the bond pays you back Rs. 100 on the 100th day.

This is called “straightlining” the price – which is typically how the market behaves. What if the market doesn’t? What if the price on the 10th day, instead of being Rs. 99.1, goes to Rs.98? Some other mutual fund has sold this bond, so now the price has fallen.

This spooks your investor. The fund has lost money! But of course, if he waits 90 more days, he will get back the full Rs. 10,000. He however ignores that and says, give me my money back – and you have to now go sell the bond in the market. You might get only Rs. 97 for it because such bonds tend to be illiquid, and then you give the investor back Rs. 97,000. That investor now says oh I sold this fund and it gave me a 2% loss in a few days.

But what really happened was: the investor’s action converted a temporary loss to a permanent one. The buyer of the bond at Rs. 97 will now see Rs. 100 in a few days, and make a killing.

Note that the fall in price had nothing to do with any problem in the bond itself. It could even be a government bond (where there is no risk of default) and you would still see such price moves.

This is exactly what happened at liquid funds recently.

Liquid funds tend to see large outflows in March anyhow. It’s tax month (March 15 is a tax date) and then there’s a lot of outflows around the end of the month because of corporates taking it out to show as cash, and later they put it back.

This time, the coronavirus outbreak changed a few things. First, certain bond traders have had to work from home, where they don’t have recorded lines etc and it’s difficult to enter trades. So the buyers of such products reduced. When there are less buyers but the selling pressure is on – remember, this is March and redemptions are expected – the price of the bonds drop.

When the price drops, the value of the bonds held by the fund also drops. Eventually this percolates into the NAV, which is based on the price of the underlying bonds.

And indeed, because on one day the NAV fell, people started to get spooked. Corporates park money in liquids and they don’t like to see a drop in NAV. So they started to take out money. And the funds had to sell. When they sold, the regular buyers were absent (work from home etc) which pummelled the price down!

To give you an example, a bond by NABARD, for around 3 months, usually was transacted at around 5.5% per year. Last week, the price fell so hard that the yield went up to 7%. (When yields go up, prices fall.) This has meant that a fund holding the bond would have lost roughly 0.5% in a day. And for NABARD, which is 100% owned by the government and has near-zero risk of default!

In fact, on March 24, the yield on a NABARD 30 day paper is still above 8%! No wonder that funds, even those that selected solid banks like NABARD, saw a drop in their value. That resulted in people selling liquids, and other short term bond funds. Now, these funds had to go sell their holdings into a market where, again, there are few buyers! Which caused this drop to accelerate further.

Our estimates of the drop in price between 16 march and 24th March is roughly 0.11% across funds. That much is enough to spook corporates, But if they wait, it will take roughly a month to see their valuations return.

This has resulted in the market being even more panicky, and will continue to remain so until there are enough buyers.

The buyers are now banks. This market has been dominated by mutual funds, who have become sellers. Banks don’t play much in this space, but with the higher interest rate they may be interested.

RBI has stepped in and given banks more money, through LTROs and such weird acronyms.

The extra money comes at 5.15% per year. That should be easy to take, and deploy on the NABARD type bond at 8% and make a killing. But no, banks are still too spooked and are parking money back with the RBI at 4.9% instead. (Think about how panicky the bank must be, when they get money at 5.15% and park it back at 4.9%, especially when they have a safe alternative at 8%!)

The liquidity addition will take time to come through, unless RBI and the government force the public sector banks to buy.

But there’s a problem: Will there be a default?

I’ll buy NABARD easy. But a good portion of liquid fund holdings are in corporate debt. Like even private sector bank debt (ICICI bank and the like) or corporates like Reliance Jio, JSW Steel etc.  Can these companies face problems? Can an NBFC not be able to pay interest on its bonds because it’s cash flow is messed up due to the lockdowns?

The fear of this is exactly what drives people out of liquids anyhow. The RBI needs to calm the market by providing enough liquidity and pushing banks to provide backstop liquidity. Of course if the company is by itself in trouble, like Idea, then no point interfering. But liquidity and confidence are key monitorables for a central bank; if India loses faith in its largest corporates or banks, the financial system will be in serious trouble.

Has this happened before?

A few times. The most recent was 2013 when Subbarao, the then RBI governor, pushed up short term interest rates to 12% in order to control inflation. Read about Operation Knicker Twist.

We wrote about it (Read post) and the market took over a month to recover.

Then, too, funds lost investors but it took a few months and people started investing in them again. But they did get back!

What should you do?

If you own liquid or debt funds, there is a small chance that the administration (RBI etc) are sleeping and will not rescue the market even if it’s a temporary need. If there is a default in the liquid market then the stress will push over to banks, which will become a much bigger problem. Given that is a horrible situation, the central bank is likely to ease up and push more liquidity into this market after March 31.

If you need money in the next month, you would probably do better with a fixed deposit so you should withdraw that much.

If you’re okay with the risk, liquid and short term funds are providing very good short-term opportunities which are perhaps a good investment as well. This is not advice, of course, as advice needs to be personalised. It will make sense for the well informed to participate in a near term return that might give more than the 6% we have been used to in liquids, but there’s the caveat that risk due to lockdowns remains.

Selling in a panic often gives you horrible prices, and liquid funds have always been used as overnight money rather than something you park for a month or two. This is now going to be corrected strongly, as the market gives way (a little) and marks down bond prices. So sell only with understanding that the risk exists, a short term bet on funds (liquid, ultrashorts, short terms) may be interesting.

(There are some funds – Canara Robeco, Indiabulls, Motilal, PPFAS and some smaller ones – who have not lost NAV through this crisis. That’s because they have largely been in the treasury bills and overnight markets, where there has been orderly buying and selling. These do seem less risky but their AUMs are tiny – when they get big enough, they’ll also have to buy into all of the other products)

Overall let’s get this straight:

More Lockdown pieces are on the way!

For more insightful articles and equity and fixed income portfolio strategies, become a premium member today. Use Code RESET21 to get 21% off regular price if you sign up during the lockdown.