We saw the Additional Tier 1 Bonds in Yes Bank written to zero (proposed) and this has led to uncertainty in the bond market. The Basel III norms clearly states that in case a bank is under distress and requires financial restructuring then the supervisor (in this case RBI) can take a call to cancel off the Additional Tier 1 (AT1) Perpetual Debt Instruments (PDI).

So was it not seen coming? It was but most of the investors just didn’t know that such a thing could happen. The basic rule of investment states that, always understand the financial instrument before investing in it. Everyone knew that Yes Bank was in dire need of funds and if it was unable to raise then some sort of restructuring/ merger was required. We have been writing on Yes bank and its problems since the early 2017. Below are the list of articles at Capitalmind on Yes Bank

The write down of the AT1 Bond has sent cascading effect across the banking sector. AT1 bonds were issued to shore up the capital to comply with Capital Adequacy Ratio guidelines of RBI. Now, banks will not be able to raise money by issuing AT1 Bonds. Even if they tried to do so, then the yields must be substantially higher considering the riskiness of the bonds. And if the yield is too high, you might as well issue shares instead.

While most of the banks in India have not issued any AT1 bonds, but there are always some outliers. Out of 20 PSU Banks and 13 Private Banks in India that we checked, only 12 banks have issued AT1 perpetual debt instruments. As of Sep 2019, the total issued amount by these 12 banks stands at Rs 72, 284 Crs. 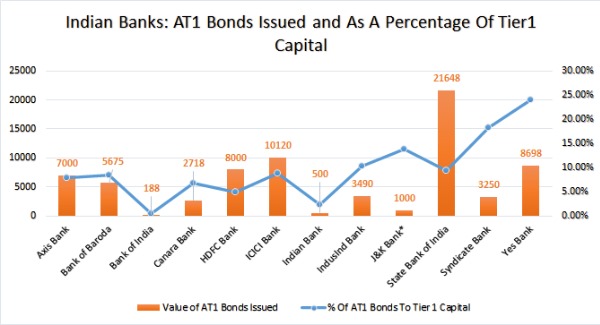 The important thing to notice here is, its not the amount outstanding but AT1 as a percentage of Tier 1 capital.

Note: Tier 1 Capital of a bank consists of:

The banks with a high percentage (say above 15%) have depended heavily on Tier 1 bonds to maintain their capital adequacy.

At current juncture Syndicate Bank and Yes Bank have issued AT1 bonds above 15% of their Tier 1 capital. Syndicate bank has 18.30% of its Tier 1 capital as AT1 Bonds. Considering Syndicate bank is getting merged with Canara bank, the number will be much lower for the merged entity, and no other entity is heavily impacted.

Capital Ratios of All Banks

RBI has mandated that around 7% of the risk weighted assets should be CET 1 capital. Below is the list of the banks with their respective CET 1 ratios.

Note: Newer banks like Bandhan bank are more than 20% and not plotted here.

Allahabad Bank and UCO Bank are below the benchmark line. The RBI also has mandated CRAR ratio for Indian Banks at 10.88%. Below is the list of all banks with their respective CRARs: 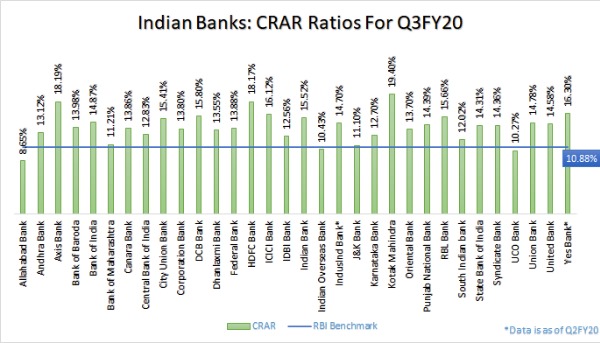 The banks below the RBI mandated CRAR of 10.88% need to raise more funds.

Allahabad Bank, Indian Overseas Bank and UCO Bank are the only three banks below the benchmark. Allahabad Bank is getting merged with Indian Bank (15.52%), so should be fine. Indian Overseas Bank and UCO bank either need to fresh infusion of equity or need to raise funds via issuing AT1 bonds. Considering trust deficit in AT1 bonds currently, the optimal way to go about it is via raising equity.

Market Cap Does Not Matter

Some TV Channels have been (irresponsibly) putting up a silly ratio called “Market cap ratio” which has no meaning in banking parlance. The ratios you care about are CET1 ratio and CRAR, both of which are charted above. As you can see the issue with a Yes Bank was a slighly low CET1 ratio, and a very high issuance of AT1 bonds to build up the CRAR (which at 16% in Sep is decent). The CET1 ratio would have eroded substantially after seeing losses on their balance sheet, which would have breached levels known earlier.

The problem has largely been with PSU banks, like Allahabad bank, IOB, IDBI bank etc. which are getting merged and getting more capital infused, so they should also be ok.