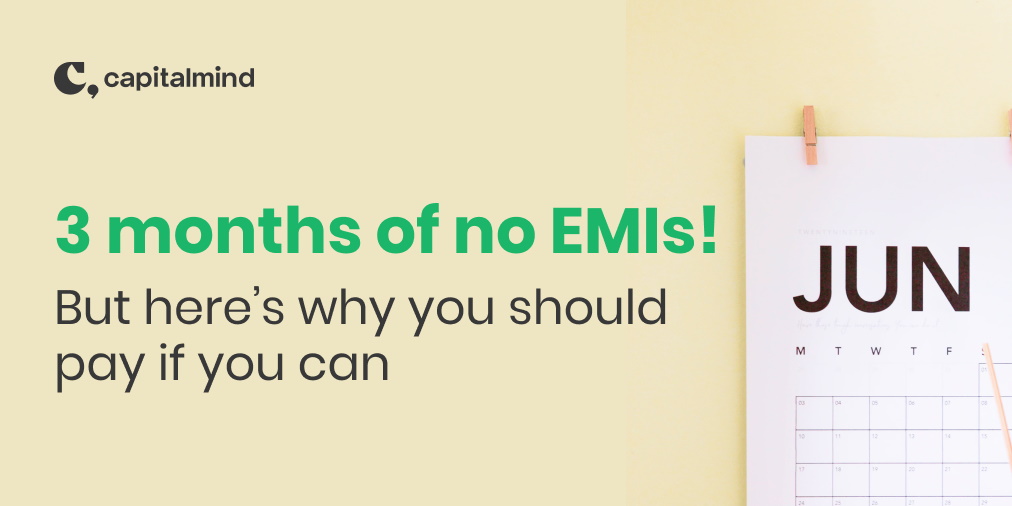 This is Post 3 of our CovidLockdown series, where we do some plain speaking about things related to money.

RBI has made a crpytic statement that has been read something like: You don’t have to pay EMIs for three months.

This is a misconception. RBI said nothing of the sort. Firstly, if you are planning to not pay up your loan or credit card bill, there will be consequences and in credit cards, very hefty consequences. Now, let’s go to the heart of the matter.

What do you mean? Didn’t RBI say no EMI for three months?

Abeyaar. No. They didn’t say that at all.

What have they said?

The official line is:

In respect of all term loans (including agricultural term loans, retail and crop loans), all commercial banks (including regional rural banks, small finance banks and local area banks), co-operative banks, all-India Financial Institutions, and NBFCs (including housing finance companies) (“lending institutions”) are permitted to grant a moratorium of three months on payment of all instalments1 falling due between March 1, 2020 and May 31, 2020. The repayment schedule for such loans as also the residual tenor, will be shifted across the board by three months after the moratorium period. Interest shall continue to accrue on the outstanding portion of the term loans during the moratorium period.

It means a few things:

Wait wait. You mean there’s no waiver of interest? How does that work?

The loan stretches three more months at the end, but this Rs. 1.07 lakh extra is additional so either you have to increase the EMI, or something else.

After three months, you can pay this Rs. 1.07 lakh to the bank and start back from 50 lakh.

Or, you can request the bank to cut your loan interest rate – a cut by 0.5% to 8%, but retaining the same EMI after three months is good enough to cover your payment over the remaining period of the loan.

That’s why I say this: Pay if you can afford to. Don’t pay interest for some RBI statement.

Even if your bank doesn’t take your money, does not cash in the ECS mandate, or doesn’t use your cheque, you should pay it up. Only if you can’t afford it because of cash flow issues, should you consider not paying.

What if I want it and the bank’s not giving me a moratorium?

SBI has already said they’ll offer it by default to their customers.

Talk to them. They might listen if they are a good bank. If not, you risk them taking your house (in case of a home loan). On personal loans, you can request them to delay but in the shorter term loans you basically pay so much more on this extra interest that it’s not worth it.

Either ways you can’t force the bank to do this. The RBI has left it to the bank to decide. But at least they have said the criteria to give such a moratorium needs to be objective (not subjective) so if you meet the rules, you will be given the extension.

The relief is that in case you take the moratorium you will not get reported to CIBIL as a defaulter. Useful to get more loans or for your credit history. In other circumstances, if you had trouble paying and asked for the same extension, you would be a “restructured loan” or worse, a “non performing asset” – and that will hurt both the bank and you. The bank has to put more capital against your loan for having restructured it, and you might find it difficult to get loans since a restructure is equivalent to a bad mark on your credit score.

What about Credit Cards?

If you think you can avoid paying this month’s credit card bill, think again.

Credit cards charge a horrendous 36%+ interest per year. A skipped credit card bill means such interest will accrue. Even if there is a moratorium.

Then, things get worse. Every subsequent purchase on the credit card will get charged interest from day 1! There is no interest free period once you have any outstanding bill unpaid after the due date.

And then, even worse. Credit cards have notoriously high fees and penalties for late payments. While the RBI has allowed a moratorium it says nothing about waiving such fees or penalties. Even that gets added to your bill.

In short, don’t do it. Do not revolve a credit card bill even if RBI shouts moratorium from the rooftops.

(Convert it to a personal loan, if you’re in trouble. )

So I can do this on a credit card anyway – pay the minimum and revolve the rest. What relief is this?

Not much, agreed. But at least this will not reflect badly on your credit history. Otherwise credit card users don’t get anything else.

Can I take a loan and take a moratorium on it?

Good try. But no. Because the moratorium will only apply  to loans that existed on March 1. Now, unless you have a time machine…

If I had a time machine I wouldn’t need a loan.

Such smart thinking is why I’m proud of you.

Anyways, is there any reason to use the moratorium on any kind of loan?

There is. Say you’re a business with a term loan of say Rs. 1 cr. of which you were paying back with say 5 lakh a month on EMI.

The business has no income because you have used the money to buy raw material, but building the product is on hold due to the lockdown. Your customers are okay – they are happy to pay you once you can deliver, so you know you’ll get the money – say the money was supposed to be Rs. 15 lakh per month.

However, the moratorium would have cost you roughly Rs. 300,000+ (3 lakh+) assuming a 12% interest rate. You can pay that extra cost for getting allowed a delay. And it also means your credit score is not hurt, even though your business is.

I’m furious. This is not what most other people are saying. I thought no EMI meant….

A moratorium means this no matter when it’s said. Educational loans are like that – don’t pay while you’re studying (but interest will accrue) and start paying back after you get a job. The idea of a moratorium isn’t to give you an interest free period, it’s to help with cash flow. A student won’t have income, so asking him to pay while getting educated is a little silly, so he gets a moratorium until he gets a job.

Plus, remember, if the bank had to waive interest, then it wouldn’t pay any interest on its deposits either. But that is not acceptable to us that our fixed deposits earn no interest. So you can’t have a one-sided argument – so the banks will not waive interest.

We know there’s a lot of misconceptions about this rule. It may still require further clarification from the RBI. But the gist of it, based on the RBI circular, has been explained here. (Would love to hear your thoughts – @capitalmind_in on twitter)

For more such insightful articles and equity and fixed income portfolio strategies, become a premium member today. Use Code SIMPLIFY to get 20% off regular price if you sign up before next week.