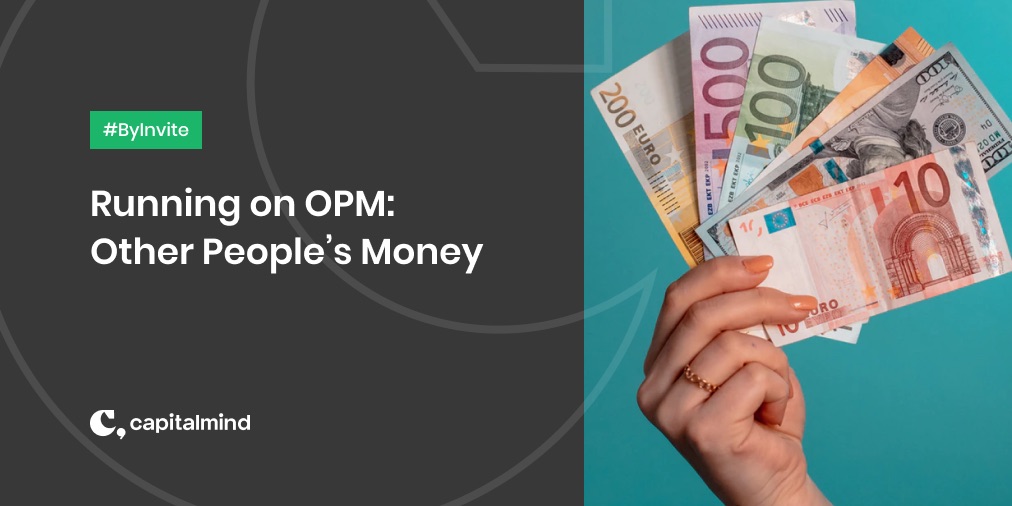 This is a guest post by Vikas Kasturi (@VikasKasturi). He is a value investor based out of Bengaluru. All views expressed are solely those of the author. The author has no direct or indirect holding in any of the businesses mentioned.

You know what is better than Debt or Equity? It’s Other People’s Money (OPM). Debt is expensive because you need to pay an interest on it. Equity is technically more expensive than Debt because you need to generate better returns for the extra risk that the shareholder is taking. But what about OPM? It’s free. And it’s like a Ponzi scheme, but in a good and legal way.

So in a business context, who are these Other People and why would they give your business their money for free? They are usually your customers and your suppliers. And they give you their money because you are all too important for them.

Take the case of Eicher Motors- it manufactures the Royal Enfield brand of motorbikes and the Eicher brand of trucks and buses. They have been almost unchallenged in the mid-weight motorbike segment and have over 90% market share with almost no advertising but through product placements and associations with macho men. In 2011, they sold 74,000 motorbikes and in 2019, they sold 8 lakh motorbikes (10 X)! In the same period, 2 wheeler sales went from about 1.2 Crs per year to 2.1 Crs per year (almost 2 X). It’s almost like there is no substitute for a Royal Enfield!

There are long waiting line for its bikes and customers pay Eicher in advance. Turns out all those advances that Eicher has collected works out to 12 days of a year’s worth of sales! This is like the security deposit on the house. Now, take a look at Eicher’s supplier payment cycle. On an average it has been paying its suppliers 95 days after the purchase! That is like keeping the supplier’s money interest free for 95 days. But in those 95 days, Eicher would have churned its own inventory 4X!

Just to put things into perspective, the OPM generated between 2011 and 2019 could have funded almost a quarter of all the additional property, plant and equipment that Eicher spent in that time! If Eicher had borrowed Rs 740 Crs, it would have paid about 74 Crs in interest alone. So not only is OPM free in itself, it helps save interest expenses too! 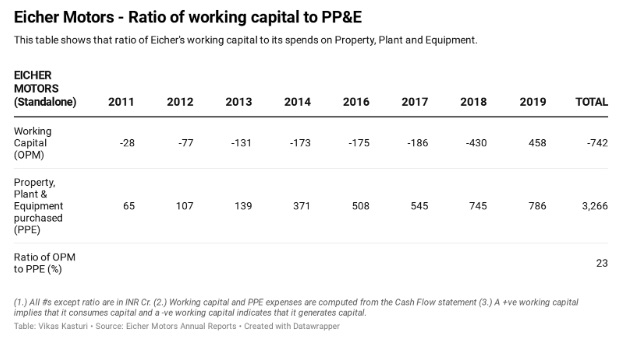 Lets switch to another special company that is also funded by OPM – InfoEdge. InfoEdge operates popular websites such as Naukri.com, JeevanSathi.com, 99acres.com and has investments in several other companies, most notable of them being Zomato. InfoEdge is like a toll bridge that both recruiters and job seekers need to use to find each other. Therefore both pay Naukri in advance for its services. How much?

Turns out, InfoEdge gets paid more than 120 days in advance for its services! 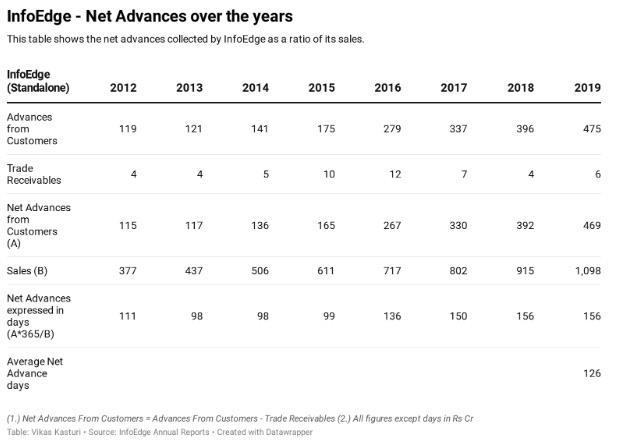 But unlike Eicher, InfoEdge doesn’t need land or machinery to grow. As a result, InfoEdge has an OPM that is 3 X its investments in Property, Plant and Equipment. What a wonderful business it is that needs neither Fixed Assets nor Working Capital to grow!

Also notice that OPM in 2012 was Rs 38 Cr and in 2019 it had grown to Rs 86 Cr. This is like an apartment where the second tenant pays more deposit than the first and the third tenant more than the second and so on. It’s quite hard not to get addicted to opium…I mean OPM.

So, as shareholders here’s why OPM matters to you:

Shareholders that can figure this out and are willing to let the thesis play out would laugh their way to the bank as did the shareholders of Eicher (20X since 2011) and InfoEdge (10X since 2011).

Happy OPM to you!

Credit: Prof. Sanjay Bakshi introduced this concept of OPM in his lecture on Floats and Moats. All the wisdom is his. Errors, if any, are mine.