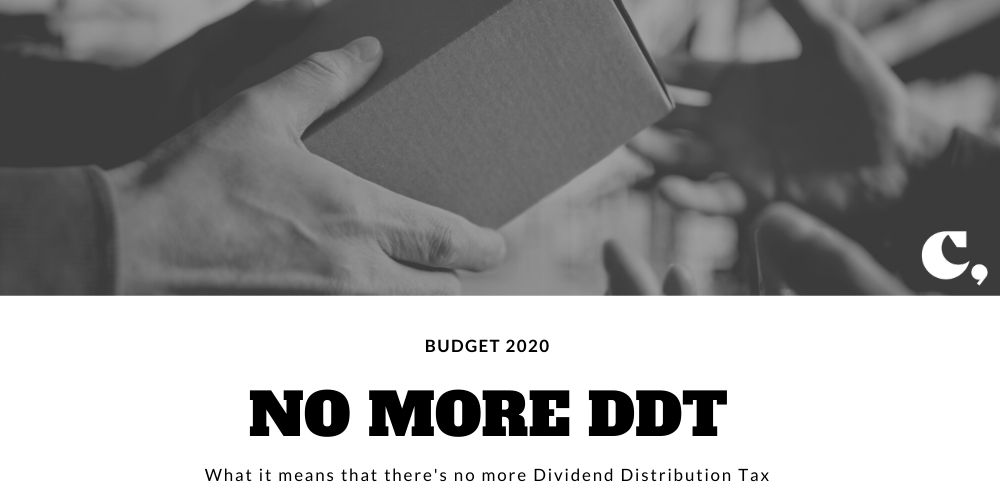 One of the big developments in today’s budget speech by the FM was the abolition of DDT (dividend distribution tax). India was the only country in the world to have DDT before this announcement. It was in 1997 that this tax was brought to be scrapped in 2002 and then re introduced in 2003.

The DDT before today’s announcement was 15%, adding surcharge and education cess of 12% and 3% respectively the effective DDT paid by companies was 20.35%. The DDT was in addition to the corporate tax paid by the company and 10% tax payable by the shareholder earning dividends of Rs 10 lakh or more.

The idea used to be: Look, we find it painful to go find everyone who has been paid a dividend. So now, we’ll deduct the dividend at source (at the company level). Then, no need to tax dividends at the investor level further.

Since it was deducted at source, the idea was that

The equation changes after today’s announcement and we look at the impact.

You pay the tax

Dividends will be now taxed at the level of the shareholder and will be added to income to arrive at the tax liability.

For instance a person in the 30% tax bracket will pay a tax as per his/her slab, and with the tax rates and surcharge, the largest investors could pay as much as 42.7% on the dividends! (The highest tax bracket, for people earning more than 5 cr. a year, is 42.7%)

Companies with high promoter holdings will now avoid declaring dividends as the promoters will have to pay tax on these dividends. Earlier, the tax that would be paid was only 20% (at the company level). Promoters tend to have high holdings in India, so they’ll have to pay a high tax on dividends – so they might actually reduce such payments.

Instead, they can take the buy back route. Buy backs will also reduce the no of shares outstanding and increase the EPS of the companies.

It also needs to be noted that companies having higher institutional holdings will not be impacted. So for instance if FII’s are majority shareholders of a company they will be more than happy to receive the dividends at their end. This tax can be adjusted against their payments in their home countries (earlier, it wasn’t allowed).

Mutual funds, insurers and pension funds are not taxed when they receive dividends so they will be happy too.

Tax Deducted at Source: Only on Dividends

There will now be a 10% tax deducted at source for only dividend payouts of mutual funds. This can be claimed back when you file your taxes.

There has been some confusion where some people have said the wording is that “income” from mutual funds has TDS, which should include any capital gains. This is not correct. See this clarification by the IT department. Also here’s the snippet from circular no 715 from 1995, when TDS was introduced:

Question 31 : Whether TDS from income in respect of units is applicable to dividend or is it applicable to capital apprecia­tion distributed at the time of repurchase/redemption of the units ?

Answer : The provisions of section 194K regarding deduction of tax at source from income in respect of units are applicable to periodical distribution of income, which is in the nature of dividend. These provisions do not apply to capital gains arising at the time of repurchase or redemption of the units.

Thanks to @ajaykjm from twitter for the heads up.

Also note that the budget intent is to tax dividends, and the new section (194K) has been mentioned in the memorandum within the clause of taxing dividends. This may see some litigation but we believe that it’s fairly clear that redemptions will not have TDS, on dividends.

What about Mutual Funds? Shift from Dividend Plans to Systematic Withdrawals

The mutual funds themselves are non taxed entities, so if they own a stock which pays a dividend the mutual fund by itself pays no tax.

But the investors of mutual funds will now have to pay tax at their end when a mutual fund pays out dividends. This makes certain categories of funds very unattractive.

Basically, don’t use mutual funds for dividends. Use a systematic withdrawal instead. Systematic Withdrawal Plans (SWP) are more tax-efficient than taking dividend plans.

Is This A Good Move?

We believe that this move will hurt mid and largecap companies with large promoter shareholdings, because those promoters pay 42.7% on any income (as most of them will earn more than 5 cr. ) Think of it like this:

For these companies, the best way to distribute income is to do buybacks. There are however restrictions in doing buybacks – the process is cumbersome, and the company should not be a high-debt company. Additionally, a company that does buybacks will be restricted from raising QIP money for a while, which can hurt future plans.

But if those are not a problem, then companies should do buybacks instead of dividends.

For mutual funds, the idea of using Dividends is not a good one – you might want to consider moving to a Systematic Withdrawal Plan instead.

The government may not make much revenue if people actually do the above. But there’s a lot of inertia and laziness, which will ironically bring the government good dividends.