A very Happy (slightly belated) New Year 2020 to you and your family! We hope 2020 brings you more happiness and prosperity.

2019 was a year of everything – politics from elections to other drama, economics from big tax cuts to the failure of DHFL and of course, serious climate issues. It’s also been an interesting 10 years, and something gets fascinating if you look back 10 years. But what have the Nifty stocks done? 10 years ago, the Nifty had a bunch of stocks. Let’s run a thought experiment. If you had invested an equal amount (Rs. 10,000) in every single Nifty stock in January 2010 and completely forgot about it, what would have happened?
Remember, the Nifty changes its stocks every six months or so, and removes the “dead weight”, the stocks that have fallen so much that they are replaced by other stocks. Let’s assume for a moment that we don’t have the time to do this. We remember after 10 years and revisit it now.

The Buy and Forget Nifty from 2010 Then, another 8 stocks gave you negative returns over 10 years. They were worth less than 2010 in absolute terms and some of them are decent names: This is depressing because now 19 of the 50 Nifty stocks are in bad shape. Then another 7 companies have positive returns, but much lower than even a cursory 5% a year.

Now we are scared. 26 stocks out of the fifty are giving us horrendous returns. This looks ugly, but let’s go on, and then, let’s look at that gave “decent” returns (at least 10% a year). 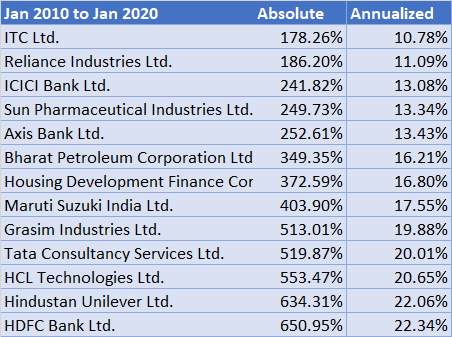 There are just 13 of them. Sunpharma occurs because it merged with Ranbaxy, another stock in the 2010 Nifty.

Just 13 out of the top 50 gave worthwhile returns – and most of these continue to be in the current Nifty. Only one of these top 13 stocks – Grasim – was in the Nifty then, but isn’t so now.

Your investment of, say Rs. 500,000 became about Rs. 977,000 if you had followed this “buy-equal-weights-and-sit-tight” strategy on the Nifty. This is a 7% annualised return just short of the 9% return that the Nifty gave. (Comparisons don’t include dividends in either case).

The Nifty, of course, is not equal weighted – it weights some stocks more than the others. Reliance had a 12% weight in 2010, and DLF was 0.86%, which meant that you would have a lot more Reliance in your portfolio than DLF.

So if you had invested in the Nifty, a Rs. 5 lakh investment would become Rs. 11.71 lakh. This Nifty replaced bad stocks every 6 months.

But what if you didn’t replace bad stocks at all, but still used the “weighted” Nifty? Your Rs. 5 lakh would become even more: Rs. 12.41 lakh.

What does this tell us?

Two things. Firstly, that loss-makers don’t really matter if you have a diversified portfolio. Sure, you may have a lot of stocks that are losers, but all you need is a few winners and you’ll make decent returns.

Second, churn is overrated. The ability to keep changing stocks also doesn’t matter that much. Eventually, the deadwood just becomes too small a portion of your portfolio to matter.

Behaviourally, we aren’t wired to think like this. We focus on our losses, and that makes us miserable. Not just in trading, in life. We get miserable about the fights, not the laughs. We obsess about obstacles, about people who weren’t kind to us, about Donald Trump, about things that shouldn’t matter because for every unpleasant thing we’ve experienced, there are at least 10 pleasant things that we’ve ignored. And then, we want to change what makes us unhappy, with strange behaviour such as arguing with trolls on Twitter. You don’t have to do it, because it doesn’t matter that a random person on the internet is wrong about something*.

The Finds of the Last Year…

…have been, for one, Nasdaq 100. The stock by itself returned over 40% in the last year, and it’s an ETF that invests in the top 100 US tech stocks. That’s given us Amazon, Apple, Baidu, Microsoft, Google, Facebook, Intel, Netflix, NVidia, Paypal, Tesla and Starbucks, among other things. All of these companies have a common theme: Disruption.

Amazon disrupted commerce, and recently, gave life to cloud-scale for web services. It wasn’t that people weren’t buying things earlier or buying things online. Amazon changed behaviour, by making it so easy, so reliable and so affordable, that the competition just didn’t see what was coming till it was too late.

Apple did this with smartphones. Facebook and Google have done this to the advertising industry. Netflix to content. Intel, much earlier, in computing. NVidia a little bit later, in the same field. Tesla isn’t just building a car, they also collect data from the cars they have sold and constantly upgrade them as well; plus they’re disrupting the concept of driving through autonomous vehicle research.

Disruption is strange. It will happen over a period of time, and hit you in the face after you’ve ignored it. Zomato and Swiggy changed the paradigm for ordering food online – in fact they’ve made it so easy that people might just order food instead of cooking. This wasn’t the dabbawallas of Mumbai going online – which is what you would have thought if you didn’t think disruptively. In their rise, they have given impetus to the industry now called the cloud kitchen.  Online fin-tech players like Paytm made it easy for small merchants to take non-cash payments, a model that’s been replaced strongly by UPI. Uber and Ola changed the nature of transportation in Indian cities. Zerodha is India’s largest brokerage – and didn’t even exist in 2009.

But none of our top companies figure here. Look at the list above. Boring, old companies except Reliance, which disrupted telecom in the last 5 years. The rest of Reliance – the profitable part – is still old and boring. HDFC Bank was a disruptor 10 years ago but it’s barely disrupted anything other than having  a twitter bot to respond to users complaining that netbanking isn’t working. Hindustan Unilever doesn’t make insanely better soap. ITC still sells the same cigarettes at a much higher price. At best, all these players are incremental – the real innovation comes from the unlisted universe.

In the next 10 years, we believe that will change. The disruptors will take over the top of the listed Indian stocks as well, and it might be some of the names mentioned above, or entirely new players. We have to bet on it – and some of them come in the form of players that invest in some of these unlisted unicorns, and there will be others where the companies are directly and actively disrupting markets. You’ll see some expensive names in our portfolios, and some of them are expensive because traditional valuation metrics don’t know how to factor strong disruptive companies.

There’s a rotten economy, no doubt, but when markets don’t fall on bad data, there’s a pretty good reason for it. More money has been printed, recently, by central banks than ever before. That money finds its way to investors who are relatively rich. They don’t need to spend more, so they invest, and therefore markets and top stocks keep going up. This cycle gets complex when you have a declining population – such as in Japan – where demand actually drops as population dips, and inflation is unlikely. The problem in being afraid and sitting out is simply that markets can remain irrational longer than we think. There is still fear. But when you feel that everyone around you is only talking of investing, and that people who would normally not know about stocks come and give you advice on buying X or Y, things might change. We’re watching for it too, so please feel free to talk to us or tell us what you’re seeing as well.

Let’s hope 2020 brings you cheer and joy! The fun is in the journey, not just in the destination, so have a great time while you’re at it!

If you’d like to know more about our personalised Portfolio Management Service, here are answers to some frequently asked questions