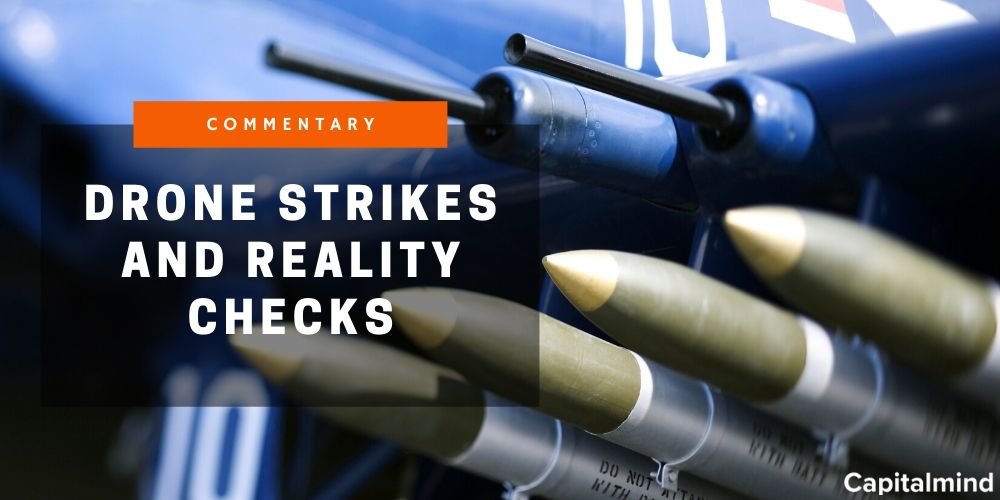 It was all going so well. What with the on-again off-again Trade Talks between US and China, and Trumps tweets, markets had become used to climbing on flimsy excuses.

Indian markets have been merrily going along. Who cares about earnings growth?

Then came the drone strike on Iranian General Qassem Suleimani, with the promise of more, and things got real, very fast.

….targeted 52 Iranian sites (representing the 52 American hostages taken by Iran many years ago), some at a very high level & important to Iran & the Iranian culture, and those targets, and Iran itself, WILL BE HIT VERY FAST AND VERY HARD. The USA wants no more threats!

Turns out the market can keep climbing walls of worry as long as it doesn’t get punched in the tenders by real-world action.

The Sensex fell 790 points. The NIFTY fell 235 points. Of course, these are meaningless absolutes. Like the discount numbers on ecommerce sites.

Where does todays 1.9% fall figure in the overall scheme of things?

Chart shows number of days that we have seen returns ranging between -10% and +10% in a single day. Therefore, if you look at the left edge of the chart, there was one day where the market fell more than 10% (24th Oct 2008), 17 days when it fell between 5 and 10%. Notice how the market ends up marginally positive on any given day (435 days).

Except they haven’t been happening like that. Not lately.

Here’s a chart showing days since the last 1.5% fall before today over the last 15 years.

Notice how falls of that kind were commonplace between 2005 and 2010. There were barely 10 – 20 days between such falls, once a month at least. Also notice how they have gotten rarer over time. Since 2016 we have gone months at a time without seeing one of these.

Maybe it’s a visual illusion, but a fall after a long time seems to be quickly followed by many more.

We have now gone 960 days without seeing a 3% correction. That’s since early 2016, almost four years.

If 3% down days were a species, there’d be campaigns with the picture of a forlorn 3% drop on social media posts with the tag line “Act now, before it’s extinct”.

We can attribute today’s fall to a high-tech weapon finding it’s target and to impending war but it’s really just business as usual in the way the markets are meant to behave.

Also, trying to gauge where markets will go during times of military tensions is not necessarily the most productive exercise. We had looked at the (non)impact of wars closer to home on our markets. Albeit completely anecdotal, markets in the Kargil War. Probably more relevant is the impact of rising crude prices. Our CEO Deepak Shenoy had spoken to ET early last year.

For now, let’s wait and watch before running for the hills.

For the historically inclined, here are the biggest NIFTY falls in a day: