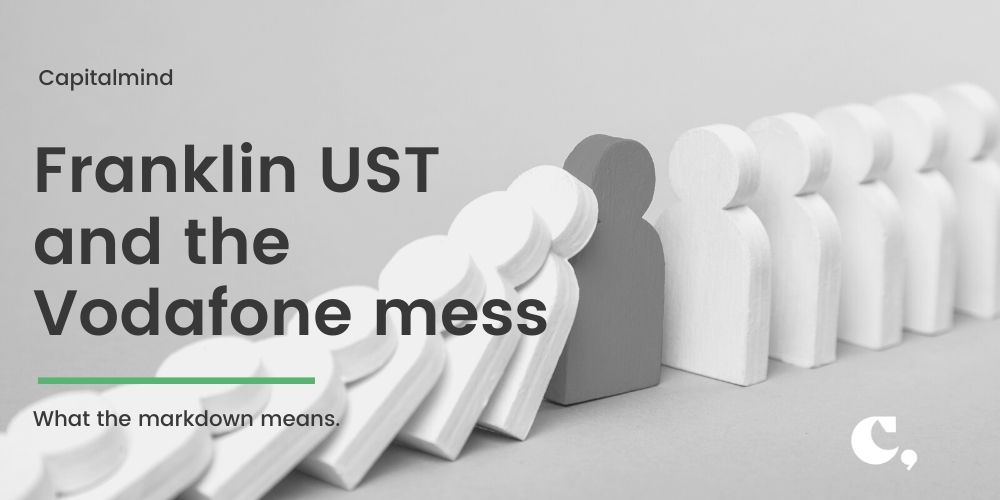 Just as the Supreme Court refused to review their order on telecom companies having to pay a higher fee, the impact was felt highest on Vodafone Idea, which has over 30,000 cr. to pay. But there was this huge impact on some mutual funds too, specifically the Franklin Ultra Short Bond fund (called Franklin UST): 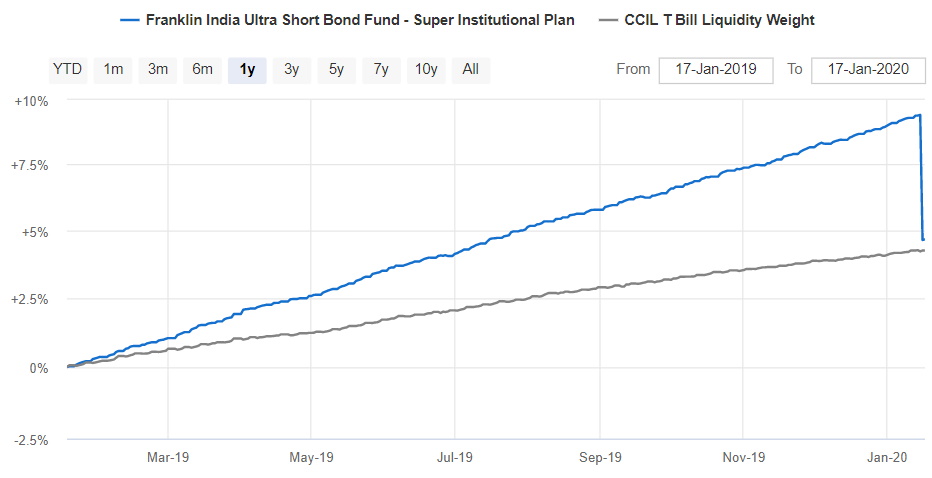 The fund fell 4.2% that one day. Why? It had about 4% in Vodafone Idea bonds, maturing in July 2020. The fund house, Franklin, decided to mark these bonds to ZERO. This is strange, but we’ll explain later.

We’d mentioned this earlier, in a post about the funds that were holding Vodafone Idea bonds. (Premium post:  The potential hit to Mutual Funds due to the Supreme Court Ruling) This post mentioned that Franklin Ultra Short Bond had only 3.55% – how did it increase to 4.2%? 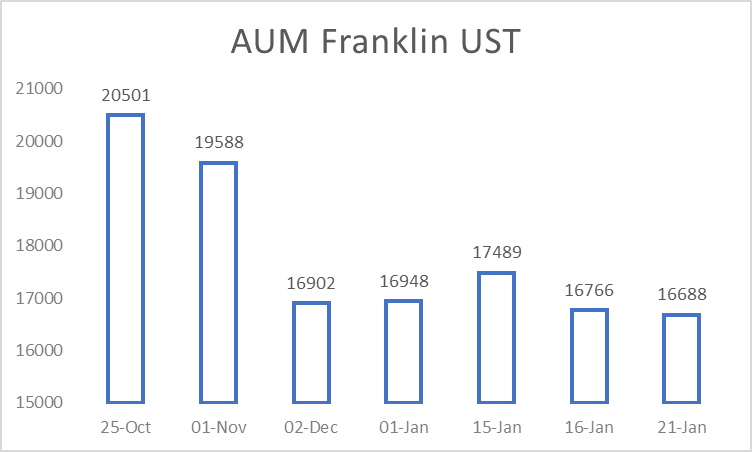 But why were people exiting the fund? And How Does That Matter?

Very simple. Once the Supreme Court ruling on AGR came on October 24, 2019, investors realized that the one entity in trouble was Vodafone Idea which would have to pay around 39,000 cr. within three months. The subsequent statements by both Vodafone and Birla, promoters of the company, that they will not invest more money to pay this money, was the clincher – if the promoters don’t put in more money, the company won’t be able to raise more debt either, so it is likely to default or at the very least be downgraded.

A downgrade means that a fund must take a hit on the valuation of the bonds. The hit may be a 50% valuation hit, and that would take the NAV down.

Now in October, the Franklin UST holding of Vodafone was only 3.55%. Smart investors knew this would turn into a default or a downgrade sometime around January. Which would mean a hit to their portfolios by January. Like we explained in our post- this was sensible if you were a very long term investor or a super-short-term one, but not if the taxation on exit was so high that you would have to pay just as much to the government in capital gains taxes.

Because of people exiting, the Franklin holding of Vodafone creeped up. Why? Because in order to cater to redemptions, Franklin had to sell the “better” debt because there were no buyers for the Vodafone debt. Therefore, the Vodafone holding increased as a percentage.

Also, Franklin didn’t have any approval to segregate their Vodafone holding into a side-pocket, so they started the process which includes telling investors that they can side pocket – officially called a “segregation” – bad holdings. (Read this post to learn about the concept of segregation)

Segregation in a nutshell is like this: A fund holds a lot of crappy bonds, but one of them is in bad shape, downgraded or in default. Now the fund can’t sell it (there will be no buyers) and has to wait for some sort of resolution by the company, or liquidation of the company. This can take time, but in the meantime, entries and exits to the fund will change the proportion of this fund in the total value. To avoid complications, fund are allowed to take the problem bonds into a ‘segregated portfolio’, or a side-pocket, which allows them to recover proceeds over time and send the money to the unit holders.

Why did Franklin mark the bonds to Zero? Why not Side Pocket?

The new Supreme Court ruling said they won’t give Vodafone a reprieve beyond Jan 23, which means they have to pay money.

Now we have seen how investors behaved earlier – They took out some 3,000 cr. in about two months. Now, they would take out even more and hurt all people who remained in the fund, by increasing the Vodafone holding as a percentage.

So Franklin marked it straight to zero. Meaning, if you exited, you would get a lower amount of money. How much lower? As much as the Vodafone holding was – which is around 4.2% at the time. That means the fund’s NAV fell 4.2%.

They have, meanwhile, restricted fresh entries to Rs. 2 lakh per day per PAN. Which means you can’t buy a lot more, aggressively, to add money to this fund.

Because after the AGR ruling, there was simply no buyer for the bonds. Before the AGR ruling it wasn’t apparent that the Supreme court would take such a stand, since the court case has been on for many years. In fact, very recently Vodafone even raised Rs. 25,000 cr. in a rights issue. But after the ruling, people knew almost immediately that the situation for Vodafone in particular was very very bad – and subsequently, statements by heads of Vodafone and Birla came about, saying they won’t add more money. In such a situation, there will be no buyer for the Vodafone bond, so it’s not useful to blame Franklin for not exiting early.

What to do now?

Stick around. You’ve lost as much as you can on Vodafone. Check the rest of the holdings of all such funds. If you don’t like anything else, you can consider exiting. If you think the rest is okay, you must hold until the segregation. If you exit now, what if Vodafone pays? In such a case, you don’t get anything. You have to hold till the segregation (which could happen after Jan 23) and only then take any actions on exit if you like.

It’s binary, really. Either they pay in full on July (to the bond held by Franklin UST) or they don’t. They won’t only if they are bankrupt, in which case you won’t get that money back but the rest of the fund continues as usual.

If Vodafone pays, you get back what you’ve lost. However, this will still need six more months.

Why will Vodafone pay? If it gets a reprieve in payment terms from the government. To save it from dying, the government could say that you can pay over a long period of time instead of immediately. That gives it a cash flow reprieve, for now. If that allows it to survive till July, it will then use money to pay this bond out and Franklin UST holders rejoice.

This is a tough chance because the government hasn’t shown any signs of wanting to give them some help. But hopefully, in the interests of a broader market, we should see some positive action. Note: We even have an actionable position on this, in Capitalmind Premium’s post.

To Conclude: Debt Funds Have Risk

Even with this fall, the five year return of Franklin’s UST fund is 7%. That’s not too bad, and if you don’t like the risk, you shouldn’t be buying Franklin debt funds (most of them have way too much risk, but have done well in the past)

If you think debt funds are not risky at all, debt funds are not for you. You could use liquid funds but they also have on extreme form of risk. Don’t believe us? See our post from 2013: Liquid Fund NAVs fall for the first time in 5 years.

The Franklin funds remain an interesting mechanism to access high-risk debt that matures in the short term. Other debt products exist that offer lower returns but relatively safer investments. But as we have seen in the past, what looks “safe” can change very rapidly: who would have thought that the biggest telecom player in the country, Vodafone-Idea, could go from boom to bust in three years? What does that tell you of mutual funds holding bonds of (big name company) maturing in 2025?