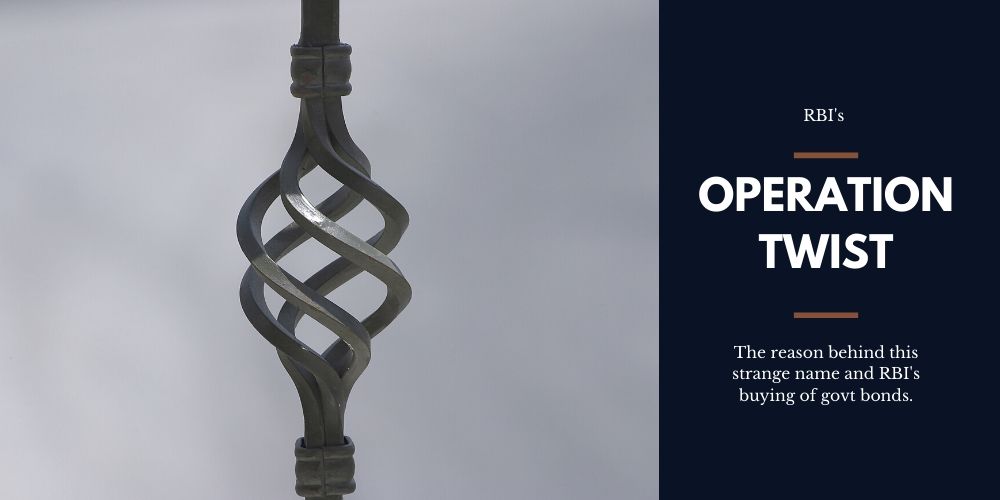 We have written about an “Operation Twist” in the 1960s in the US. (Read post)

In 1961, when Kennedy became President, the US was going through a recession. The answer was to lower interest rates, but since rates were higher in Europe (and money was backed by gold), the fear was that people would just take their money and gold from the US and put it elsewhere. The yield curve was normal – that is, short term rates were lower than longer term ones.

Since businesses borrow longer term, and arbitrageurs play in the short term, one idea was to keep short term rates high (so arbs will bring money to the US) and long term rates low (so businesses can borrow at better rates). This could have been achieved with the Fed buying the longer term securities, while the treasury (the government) issued more short term and less long term securities. Effectively the yield curve was being moved from an upward sloping one to a flat one, which explains the “twist”.

What the bejeezus is a yield curve?

This thing sounds complicated. But consider some very basic facts:

And what is “twist”?

Now typically the yield curve should “gently” slope upwards. In fact it should be quite flat if the RBI is looking to be cutting rates in the longer term, the difference between a 10 year bond, and a 1 year bond, should typically be quite small. That, unfortunately, had not been happening.

Typically, spreads should be 1% or lower, at a time like now, when inflation is relatively low and the RBI has been cutting rates. But recently, the spreads have increased: 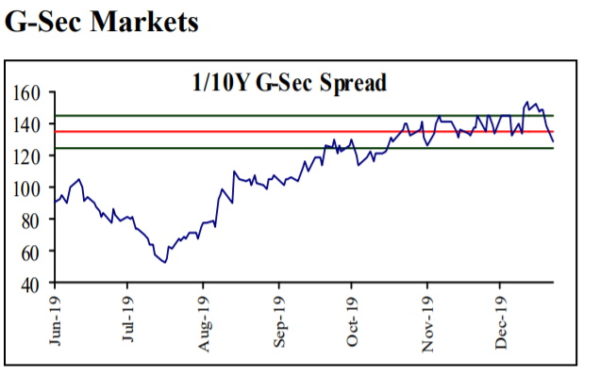 That’s a very high spread, so the RBI decided to take some action. But why?

The RBI owns a large quantity of government bonds (about Rs. 10 lakh crore worth) but many of them are shorter term in nature. When these bonds mature, the RBI will then buy more bonds, through Open Market Operations (OMO).

Now, the RBI had decided to do two things:

When you buy bonds, their yield will decrease. So the 10 year bond – a benchmark in the bond markets – would see its price fall. At the same time, the short term bond yields should rise a bit.

You can see that 1-10 spread fall to lower levels in the chart above. But the whole yield curve itself has fallen in the last few days. 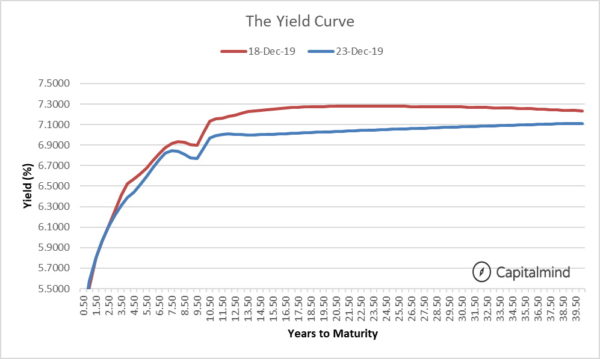 So indeed, we’re seeing a small decrease in the spread, but it’s not anywhere close to enough. So we should expect to see RBI do more such “twist” transactions.

We have done this before. And Liquid Funds Lost Money!

In 2013, the RBI tried this stunt, but it was a horrible thing. We called it Operation Knicker Twist, because that’s what it was. Then, the RBI decided to increase the short term yields to 12% (it sold short term bonds at 12%) and bought longer term bonds. But that was silly because the yield curve was already flat. Even before that attempt, short term rates were higher than long term rates. There was no need to twist the curve.

But, because of this action, as short term yields spiked up, a strange thing happened.

Liquid funds then lost money. More than 0.2% in one day. (Read post) But that’s unlikely now, because short term yields are in control. And since the relative amounts were much larger then: 22,000 cr. short bond sales, 8,000 cr. long term bond buys. Now it’s just 10,000 cr. which is an even smaller percentage.

The process was slowly reversed with Raghuram Rajan came in and brought in foreign money through a forex swap, and eased up on the bond markets. Yields fell quickly, and the 9%+ rates we saw on government bonds are now only fond memories.

What’s happened is that the yields of the 10 year bond have fallen from about 6.8% to 6.6%, but short term yields are still around 5.2%. So most long term debt mutual funds should have done well. In fact, gilt funds made over 1% in the last two days.

If the RBI does more such operations, with say the 15 year bond and so on, there will be a further fall in yields, down to a 1% difference between the 1 year and 10 year. However there are threats to the long term bond yields: Tax collections are lower than expected, disinvestment hasn’t quite happened as fast, and there may be a downgrade by global rating agencies, and of course, inflation could return too.

At Capitalmind Premium we have a set of bond funds in our fixed income portfolio, and we’ve focussed a lot more on long term gilt funds in this year. This doesn’t change so far, but we’ll evaluate threats as they evolve.

Beyond this, if the RBI does many more such OMO “twists” we should see interest rates for corporates drop in the longer term as well, and for the government too. Remember, the highest expense of the government is interest payments, and a relief on that front for future borrowing will help reduce the deficit.

Operation Twist is, for once, the real thing. But for it to be effective, they’re going to need at least 50,000 to 100,000 cr. of bonds to be “twisted”. In comparison with other central banks, our RBI has never really said they will “do anything that is needed” to achieve their goals. But for once, they might need to assert themselves more strongly than just a one-off bond purchase.