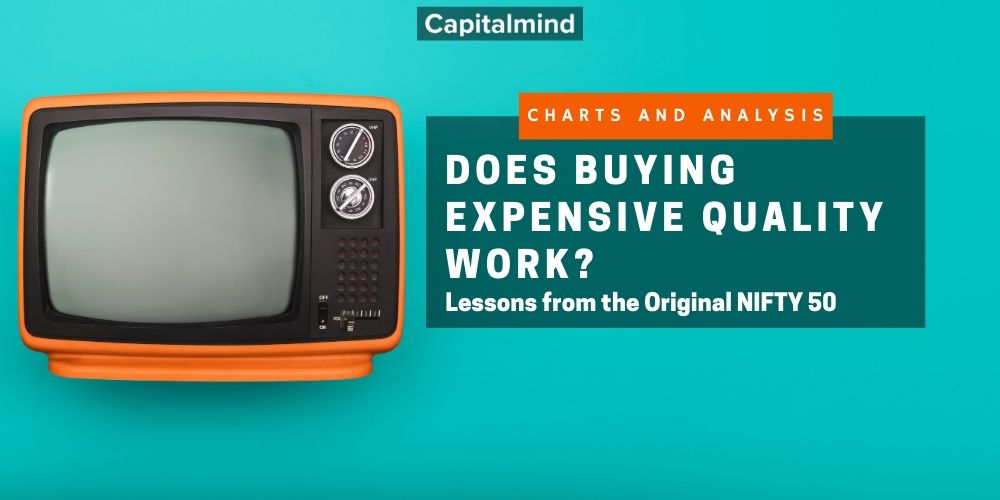 It’s the 1960s. New investors join the markets in droves. The number of shareholders crosses a landmark number for the first time in history.

Most of these new investors flock to mutual funds.  Assets under Management, having grown 7x in the last decade, are on track to grow more than 3x.

A star fund manager breaks away from the firm that he helped make the face of the mutual fund industry to start his own. His NFO seeks to raise $25M, an ambitious amount for the time. He plans to charge as much as 8% in entry loads. Yes, that’s not missing a decimal.

He receives $247M (over $3B in today’s terms) to manage. That is an equivalent of Rs. 21,000 cr. in a new fund offer today. Just the entry load would have justified all of HDFC AMC’s crazy valuation.

The total number of funds breaches 200 for the first time. Fund Managers acquire rock-star status. One is even featured on the cover of TIME magazine.

As these fund managers seek out opportunities, a specific set of companies with proven track records and consistent dividend growth start to get more notice. Most of them are household brands. High-Quality Franchises with strong balance sheets in a surging economy.

They trade at 50x-60x-70x earnings. But they are high Return on Capital businesses, with tremendous runway for growth. You can’t go wrong.

They come to be called “One Decision stocks”. You only buy. You never sell. And not for measly low double-digit gains.

Keep in mind. That starting point is where they were already trading at far higher multiples than the rest of the market.

The “Nifty 50” was the unofficial moniker given to a set of stocks that appeared as part of a list by Morgan Guaranty Trust in a Forbes article.

The likes of Coca Cola, Xerox, Eastman Kodak at moderate 50x earnings. Gillette (also a part of the Nifty 50), was a steal at 25x.

The argument was Quality growth companies pay. The old adage, “You pay peanuts, You get monkeys” might as well be every fund manager’s mantra at the time. And it worked.

Wait. This is starting to sound familiar.

Quality, or any other kind of winning theme can keep going up long after rational consensus says it is ridiculously expensive.

There will be no prizes for guessing what happens next.

This chart would have looked more dramatic if the two lines were rebased to 100 at the start of the x-axis. The orange line (NIFTY 50) would end at 45, the grey (market) at 54.

Put another way, if you got trapped in the statement that quality lasts forever, you would have lost 55%. (The broad index lost 47%, so it was relatively better)

Active strategies that go up fast, tend to exhibit the same behaviour on the way down. Buying Quality at any price is no exception.

Five years later, both investors are roughly where they started.

Add the little matter of 2-3% annual management fee, the index investor ends up ahead.

Active managers will periodically make the index appear laughable, but it is bloody hard to meaningfully beat the index over the long-term given the fees

Here’s the list of the original Nifty 50 with their starting Price-Earnings in early 1972.

We are at a similar phase in India where a small set of stocks has everyone interested. These stocks continue to rise even as others are lucky if they move sideways.

The narrative is, they are the few proven businesses that have delivered in the past and will continue to execute to high standards. Problem is, no one knows when a great business becomes a bad investment. Except in hindsight.

Well, not all of those stocks are high P/E. A few traded at levels comparable to the S&P500 at the time. So what gives? We took a look at that too.

How would you have done if you bought the expensive Quality Nifty 50 and held on for dear life?

Turns out, over the really long-term, quality pays off, whether the High PE or the relatively lower PE bucket of stocks.

The glamorous High PE stocks appear winners in this chart by piling on returns in good times. The lower PE stocks managed to deliver more “solidly” in comparison.  Note neither consider the impact of the stocks that disappeared. (Polaroid, Eastman Kodak were from the High PE bucket)

Do not underestimate the impact of seeing your stocks go nowhere over five years. Unless you’re a robot, you will end up selling sometime in the middle of that first correction that is so much steeper than the rest of the market.

Owning high growth, high ROCE, high P/E companies is not the problem. Our immediate expectations from owning them are.

How have expensive quality stocks worked for you? Tweet to us at @Capitalmind_in

Lessons from the past – Stewart Advisors [link]