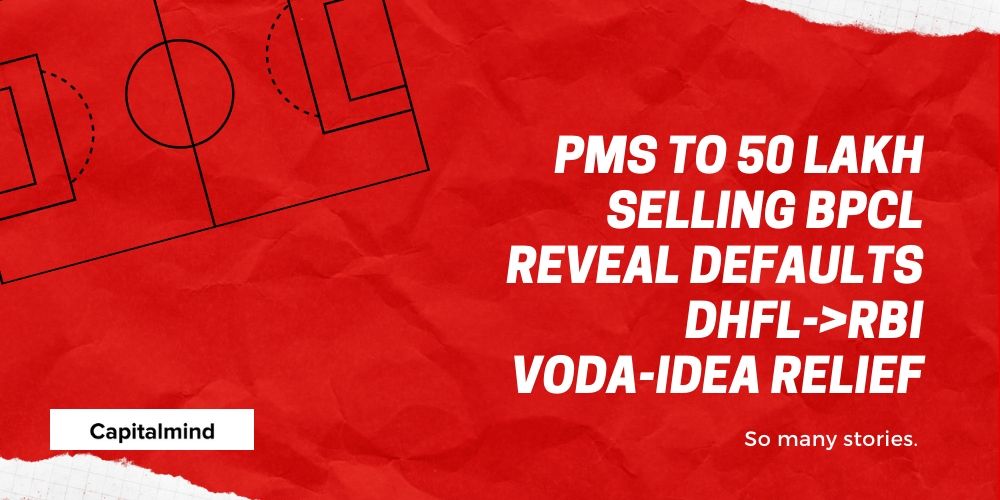 So many incredible things happened yesterday that it’s taken me a lot of effort just to get things together to write this piece.

Phew. That’s a lot. Here’s our quick take on them all. Don’t get bored. Get Popcorn.

Vodafone-Idea and Airtel Get More Time To Pay Spectrum Fees

There was this big problem with telcos. They’d been fighting the government for years on whether they should pay a percentage of telecom based revenue, or all revenue they ever earned. The answer, said the Supreme Court recently, is all revenues. That means Vodafone ends up owing over Rs. 39,000 cr. to the government, in fees, penalties and interest, and Airtel has a larger number than that.

The problem? They had to pay by February.

The government’s said okay, listen, we get it, don’t go filing for bankruptcy just yet. Don’t pay us spectrum auction dues in Feb.  Just pay over the next two years, in installments, and because we don’t love you that much, we’ll still charge you interest for that time.

Correction: This was a mistaken assumption that AGR dues were deferred – it was the dues on spectrum auction fees, which is a smaller component of the payables. AGR is still a problem. A very big problem.

Airtel’s in better shape anyhow, and Jio’s in great shape and pretends to wonder what the fuss is all about, while silently raising prices and laughing all the way while the bank comes to it. Because Jio doesn’t really need to go to the bank.

A change in portfolio management schemes is happening, and will be notified soon. The recent SEBI board meeting has agreed that:

For customers of Capitalmind Wealth, we have  solutions. We’ve mailed a letter – but the summary is:

There are other changes too. Minimum net worth of all PMS entities needs to be Rs. 5 cr. This is tough for many small players and I don’t like this, but the rule will come. Putting a gate based on net worth doesn’t help at all – some of the largest pieces of bad practices have been with players who have huge net worth. However, the networth can be built over the next three years, so people don’t have to shut down right now.

PMS services can now only buy listed stocks or mutual funds in India. This is good, too. You can’t buy unlisted companies because of valuation issues and then say things are illiquid if a person wants to exit. At Capitalmind Wealth, we have investments in US stocks, but only through Indian mutual funds that have the exposure.

We’ll have to wait for final notifications to see how this actually impacts and when.

In 2018, SEBI said companies must reveal that they have defaulted even if they paid back one day late, or even one rupee less. This is rough because sometimes banks will say “server is down, sir”. And you can never ever argue with that. I believe eventually that if a paanwala says his server is down so no paan for you, you will learn to not argue further.

So companies, and the RBI, fought and got SEBI to take this out. But SEBI doesn’t give up that easy. No sir. Their server was down, but not out.

This helps. Because now you know, so you can quickly start to figure out how you can sell something, 30 days after the bankers have sold them already. But seriously, this is a good thing, for listed companies. We never know when bank loans are defaulted on – we only know when bonds are. Bank loans are then manipulated by bankers who suddenly reveal such defaults to us in some quarterly meeting, and now that will be less likely to be a surprise.

BPCL, Concor and SCI will be sold

More on this later, but BPCL, Concor and Shipping Corp will be sold entirely. That will be good because it should get the government over 100,000 cr. as disinvestment revenues. Apart from that, the government owns some other small things which they will get an NTPC or a set of other PSUs to buy, which is not really disinvestment but it’s fine for now.

BPCL will be sold without NRL, a refinery in Assam. Apparently this is because the refinery secures fuel to the eastern troops, and that can’t be privatized, plus there’s a bunch of politics around it.

Whatever happens, the rest of BPCL will be sold, and apparently there are tons of suitors. More on this on another post, but it’s a good idea to have this disinvested. (Note: we are interested in this stock)

Companies can’t hire and fire easily, at least large ones. And then, fixed term contracts are done through contracting companies, because direct such hires/fires aren’t possible.

The Cabinet has approved a change that allows such fixed term contracts at the company level, for short term contracts. Also, there was a limit – more than 100 workers, please get an okay from the government/tribunal before you fire. The limit of 100 will now become a “variable” – in the sense, that the limit can be changed by the government instead of going through parliament. A cabinet okay isn’t enough though – this means the bill will come, it will be voted on, and only after it becomes an act does this happen.

This is complicated, but in some corner of the internet, someone is quite happy and let’s just acknowledge that.

First, you tell me to build a bridge. I build it. You don’t pay me because you’re scared someone will accuse you of corruption.

So you take me to a court-led arbitration. Some fellow hears your side of the story and my side.

Then you say they’ll still accuse you of corruption. So you take me to high court. And then I die waiting for my money.

The “I” here is an infrastructure company and the “you” is the government company like NHAI that’s supposed to pay up.

To avoid the above, in 2016 the government has said that if the arbitration award goes against the govt body, it has to pay up 75% immediately. But on a bank guarantee.

Banks then were supposed to guarantee not just the 75%, but also the interest payable on that amount while the high court case was on. Meanwhile, the High courts server was down, and the banks were like dude, we aren’t guaranteeing this forever.

So the government’s now said, “Ok boss, give us guarantee for the 75%, not any further interest”. Which is good. For Infra companies. And for banks who fund them.

DHFL is taken over by the RBI.

The RBI has now superceded the DHFL board.

Which means if you don’t get your money back, you have to ask the guy who prints money.

Most likely, DHFL goes into liquidation. Which probably will involve a lot of intoxicating liquids for a few bankers, but more drama for others.

We’ll know what happens later, but you can be now safely assured that any kind of return of money if you have it in debt or such, will need to wait a year or more. What’s good is that it’s finally happened, three months after they first defaulted. This means big write downs – for bank, mutual funds, insurance companies, pension funds and what not. But better now than later – we have seen the damage caused by kicking the can further down the road.

Almost crazy that the HDIL-DHFL family (they are related) have taken a toll on the banking system, and suddenly RBI’s taken over the impacted entities (PMC Bank and DHFL). Let’s see if the RBI fares better than whoever is now managing the IL&FS crisis.

Did you like this kind of short brief summary that isn’t exactly the most sober in tone? Let us know – @capitalmind_in on twitter.