A quick look at a few charts on the Current Account Deficit today. Remember, the Current Account of the country involves finding out what all we import, what we export and then seeing how much the deficit is between exports and imports. This has physical goods trade (merchandise), non-physical stuff (Services), inflows like remittances, outflows like royalties paid and so on.

Read our educational note: What is the Current Account and the Balance of Payments?

So, the interesting point is that the Current Account Deficit was at $14 billion for the quarter ended June 2019. That’s not a huge deal – about 2% of GDP for the quarter. But the big thing is this: Of the $14 billion deficit, $11 billion was only gold! In fact, this was the highest amount of gold imported by India since 2013!

Why? Because gold prices went up. Gold is a special beast: India doesn’t allow it to be exported. We only import gold. So the imports do hurt the current account. 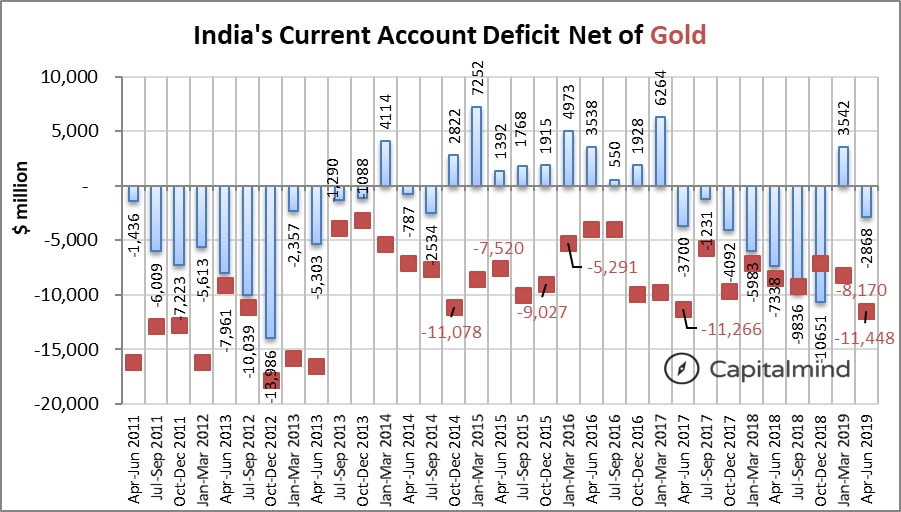 If we found a way to curb gold imports (or allowed exports!) we might see a lower current account deficit.

Foreign Direct Investment is when foreign investors buy into our companies, for the most part. Not in the stock market – that would be Foreign Portfolio Investments (FPI). But things like where Amazon puts money into its Indian arm. Where a Zomato raises funding from foreign VCs. When a Nippon hikes its stake in Reliance Nippon AMC. And so on.

This has been a whopping $13 billion in the April to June quarter: 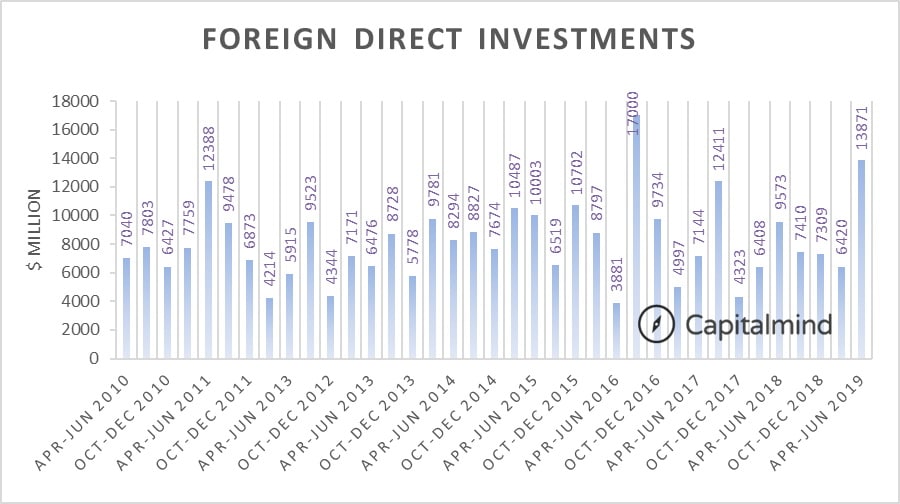 That’s also the second largest amount of FDI in a quarter.

We’ll know about Q2 data only after a couple more months, but as of now, the charts show us a current account that isn’t horrible. Remittances brought in $18 billion, and Software exports brought in over $20 billion in Q1, which helped bridge most of the merchandise deficit of $46 billion. It’s interesting now though that the financial bridging is happening more through FDI than through the FPI route, or even NRI deposits both of which have relatively quicker exits.