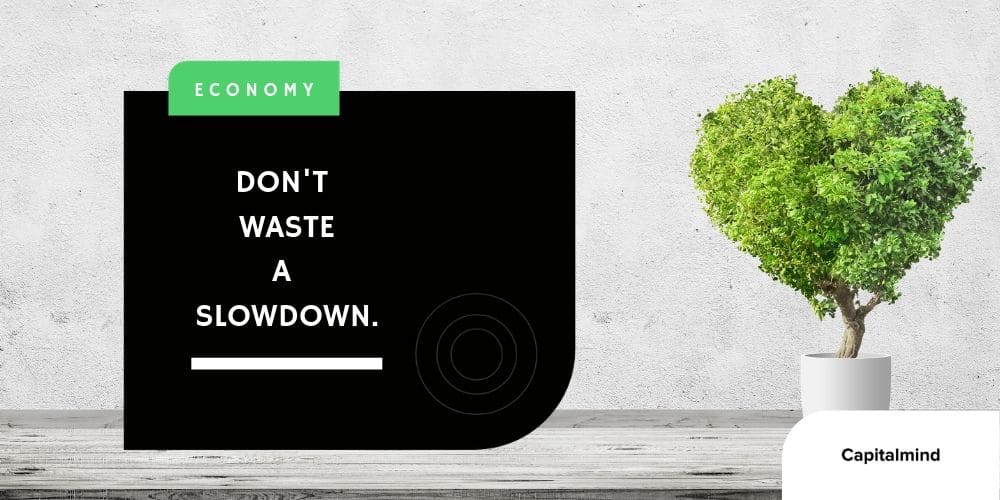 This continues the “Don’t waste a slowdown” post where we started to say this: Look, we’re slowing down and it’s going to take some courageous decisions to move us out of this. We take the first piece on: Gold.

We import a heck of a lot of gold. Just last quarter, we imported about $8 billion worth of gold. This has been sticky for a while.  But it used to be a lot more! Why were gold imports higher and what brought them down?

In 2013, there was a nearly complete ban on Gold imports when the rupee went from 55 to 68 in a few days. And them, a 10% duty was put on gold imports. This took down official gold imports to just $4 billion but we quickly saw this go back to $11 billion a quarter, and then it’s been up and down every since but the average is $8 billion.

That’s the official number. There’s the massive amount of gold smuggling too. Because at 10% duty, and a very small footprint, it’s super lucrative to smuggle in gold! (For example, you could earn as much as Rs. 300,000 if you smuggle in gold given the price difference abroad and the duty here, with just 1 kg of gold. That’s pretty much the gold in a couple of belt buckles, suitably designed.

And we even tracked innovative ways to smuggle gold, only those that were caught. (Read post)

In the June quarter, over 1.1 tons of gold was caught when being smuggled. (Link) That is only about Rs. 400 cr. but you can bet that about 20 times that amount would not have been caught. (And there’s corruption in customs, so they won’t even reveal a fair amount that was caught and let go through bribes) I would imagine that the scale of imports will still add up to another $3-5 billion, which is paid for using shady overinvoiced imports of other things, like even diamonds.

We need a “structural” change. Here’s what I suggest.

Reduce Gold Import Duty to 2.5% Over The Next 20 months

Why do people buy gold? Because it retains price no matter what. What happens when you put duty on it? It increases the price of gold. How would that deter a person from buying gold when they bought precisely because it’s valuable?

You can’t cut it all at one shot. That will push people to buy more immediately because humans are like that. So the better thing would be to signal to people that:

Why will that help? It’s only Rs. 200 per 10 grams for what is a Rs. 38,000 bill on a 10 gram coin. However, when you signal that prices will fall, the natural reaction is to delay purchases. After all, if the price is going to be lower in 20 months, I can hold on that long and then consider buying. By this time, we should be able to address some other things as well to change the nature of the supply to meet our local demand.

Another benefit is that it reduces the price of gold so the net real interest paid for Sovereign Gold Bonds will be lower, if Gold Prices are controlled.

The government will lose some revenue – at $8 billion a quarter they stand to make around Rs. 20,000 cr. a year on duty on gold. But this is nothing compared to what we will save if we reduced the imports to half. Note how sensitive we are to gold imports – we are actually a net exporter if we remove gold imported! 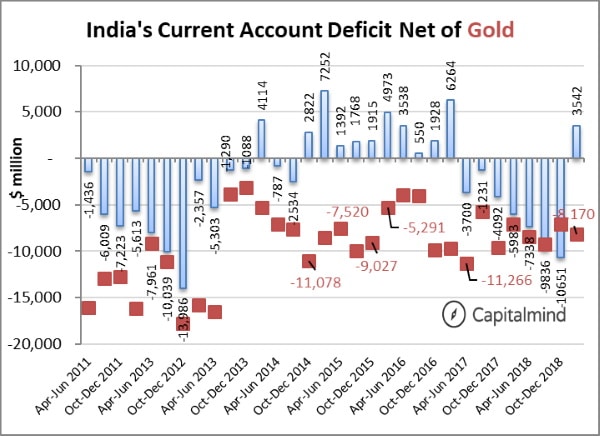 This is only an interim step, and we need to do more. What else?

India only allows gold imports. We can’t export gold bars or coins or any such thing. We can export jewellery, but it needs to have at least 6% value add to be able to export the gold itself.

Since there is so much demand worldwide as well (gold prices have recently gone up), why not let our folks export the shiny metal? As bullion. As even a government backed “India Gold” with a purity and a buyback guarantee from MMTC (who anyhow mints gold coins).

Such exports should not get export benefits (otherwise this will just get round tripped) though we should eliminate import duty/input GST from exported gold. There may be some issues with funding through bank loans, but in any case, funding for the sector is highly regulated. The idea is simple – allow gold exports. This may not happen now – but over a longer period we should see two way traffic of gold.

If the price of Gold goes up (internationally) we might see more gold go the export way if local demand were to shrink in any way.

Bring Back RBI’s Gold and Distribute

RBI has around 600-700 tons of gold abroad. India probably has 50,000 tons or more inside India itself. Why should the RBI hold gold? Especially when gold imports are a problem. If anything, the government should own this gold, but I would say that because Indians own so much gold, the government or the RBI should not have to.

Btw, the US gold is held by the US Treasury (an arm of the US Govt) , not the US Federal Bank.

Now, if we did bring it back it would be a little crazy to try (that plane will be hijacked or shot down 🙂 ). But you could do this over time. Do about 60 tons a year, for about 10 years. That’s going to replace about 8% to 10% of gold imported by India. This is a slow, grinding replacement and isn’t a one time thing – so the signal is that you don’t really need to import all that much, the RBI is bringing some back anyhow. This may not control the price but I don’t care about the price, all we want to do is reduce having to pay dollars for gold imports.

How can RBI do this? You can ship it back to India a little at a time, sell it to jewellers or banks locally and replace that value (on the RBI Balance Sheet) by buying Indian government bonds. India has only 1/3rd as much of government bonds compared to US Dollar reserves – we need a healthy balance of the two.

Or, you could do a cross deal for importers – whatever you import, we will pay for with actual gold through RBI reserves. This is a “gold swap” of sorts – the importer just pays the RBI instead of the person they import from (who gets Gold from the RBI instead, which is anyhow stored abroad). This way, no dollars go out to pay for the gold!

I have suggested in the past that we should sell excess gold in temples or other religious places. (Link) This is not a sale – it’s just a replacement of that gold by a government guarantee they will get it back. This has been tried, but it hasn’t really worked. I would suggest that we tax gold donations to religious places like temples or such. This tax can be paid in gold.

Another way is to have gold be used more for taking loans. After all, it’s liquid and can be used quickly for money. Here’s one suggestion:

Another simple rule is to confiscate all smuggled gold and to sell it to jewellers and keep the money. Don’t allow people to just pay a fine and take the gold back. This will deter smuggling and also add more gold supply locally.

Cutting gold imports is very useful in the longer term, because net of that, we are a fractional error away from being a surplus country. Especially with crude prices this low, it makes sense to focus on a long term strategy to change the gold equation.

In the long term, gold is a hedge for two things:

We’ve got inflation under control. But after demonetization people have lost trust in the government somewhat. And with new rules that tell us nearly everyday that we are all criminals for even trying to make a little money, or for starting a business, or for not complying with some insane GST/Income Tax/ROC/Shell company rule – we can’t expected to have a lot of trust. The government needs to address that too – and when it does, our real love for gold will come down.

In normal times, people hate such measures. Because they have things to argue like oh goodness how can you export gold, it is a national treasure and so on. When we are willing to export humans in IT, and humans are way more important, why can’t we export gold? Such arguments are made when there is relative calm. But when there is a crisis, no one will entertain them, because it’s obvious what is more important, and action is both needed and desired.

Let’s not waste this slowdown. So, let’s reduce gold imports that form 60% of our trade deficit. A summary, again: