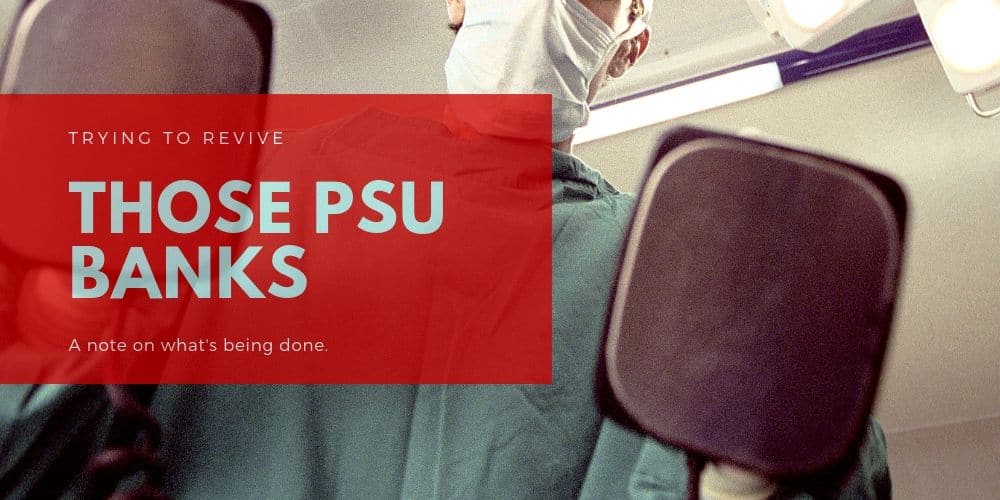 The weekend was somewhat dramatic of sorts. From a PMO office saying they do not want to be funding the NHAI for EPC projects to a finance minister press meet announcing a slew of measures. Let’s take a look specifically at the changes in the Banking framework with Public Sector Banks.

Banks have been notorious for not passing rate cuts by RBI to consumers. RBI has repeatedly appealed to them, but banks failed to do so. To make the banking system more effective RBI came up with Margin Cost of Lending Rates aka MCLR. Banks post April 1 2016 had linked their lending rates to MCLR. Most of the older loans are also linked to MCLR by now.

Read our article “RBI Forces Base Rates To MCLR, and How This Will Hurt Banks”

Even then, banks haven’t changed MCLR downwards as RBI rates have fallen.

On a downside banks will see a immediate margin contraction as their new loans are going to be at a cheaper rates. The cost of CASA remains same and other deposits will take a year or so to reset to lower rates. However the idea will be to get more business by attracting people to borrow from them at lower rates – if a private bank’s lending rate is much higher, then people will migrate to the lower interest charging players.

But there’s another reason public sector banks should lend:

PSU Banks have been forced to recognise NPAs by RBI and more importantly they had to provision for them once recognised. As the provisioning picked up pace, most of the banks have seen a major hit on their capital adequacy ratios (CARs). That was the time when government came with a mega package of 2.11 Cr PSU Bank recapitalisation programme. The banks which get the money can use it in two different ways viz. for more lending or for provisioning.  To know this first you need to understand how CAR  works.

How does CAR Work?

In the above instance, the Rs 50 capital given to bank can be used to lend another Rs 500 or to provision Rs 50 NPA.

Note that when a bank capital adequacy ratio falls below 6% the RBI doesn’t allow it to lend any more until it has found more capital.

The finance minister has now decided to add another Rs 70,000 Cr to bank recapitalisation is towards increasing the lending ability of banks. How does this help?

The below table shows this. Note that we have considered recapitalisation to the tune, where CET Tier 1 ratio reaches 8%. 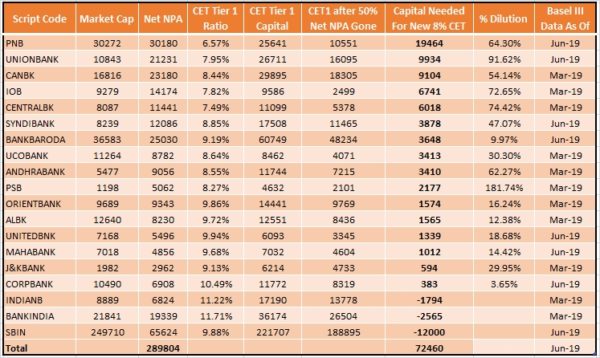 Note:  For most of the banks CET tier 1 capital is not available as current quarter BASEL III has not been disclosed. Wherever it is not available we have taken the numbers from previous quarters. Thus data should not be taken at exact face value. Its more of an approximation.

The above table helps us understand how much capital is required to reduce NET NPA’s of PSU Banks by half. So to reduce PSU banks Net NPA by half (reduce NET NPA by Rs 1,44,902 Crs) it requires Rs 72,460 Cr capitalisation.

The maximum chunk (nearly 53%) will be used by PNB, Union Bank and Canara Bank.  Even going by current numbers PNB, Union Bank, IOB and Central Bank of India are under capitalised as they are way below the mark of 8%.

Interestingly Bank of India is adequately capitalised. Indian Bank and SBI are already known to be well capitalised as they didn’t receive the last round of capitalisation.

Also once the banks are capitalised, they are taking that much dilution effectively. (The government will get shares at the current market price) In the above table PNB can get diluted by 64% at current share price, if it wants to reduce Net NPA by half by capitalisation. The least impacted is (apart from ABI, BOI and Indian Bank) Corporation Bank. It takes a dilution of just 3.65%.

Additionally, note that the falling interest rates mean that banks will make profits on their bond holdings, because bond prices have gone up. That profit, too, will help their capital ratios.

Why did public sector banks get these bad loans? Was it just bad decision making? Was it corruption? No one will know- and the bankers will get away scot free. Some of them are under investigation, but there is no change to the overall process of giving loans.

If we don’t want the situation the recur, the government must add a lot more accountability to the banking system, and ensure that those responsible are no longer in these jobs. Without that, this is just a bandage, not a cure.

If PSU banks can now start lending again (due to higher capital adequacy ratios) and have profits due to bond prices also, they can compete well with private banks. If they are forced to lower rates as well, they can extract marketshare from the private banks and NBFCs. Will they do it? We’ll have to wait and see.

As much as we think this incentivizes public sector banks, the real impact will be: