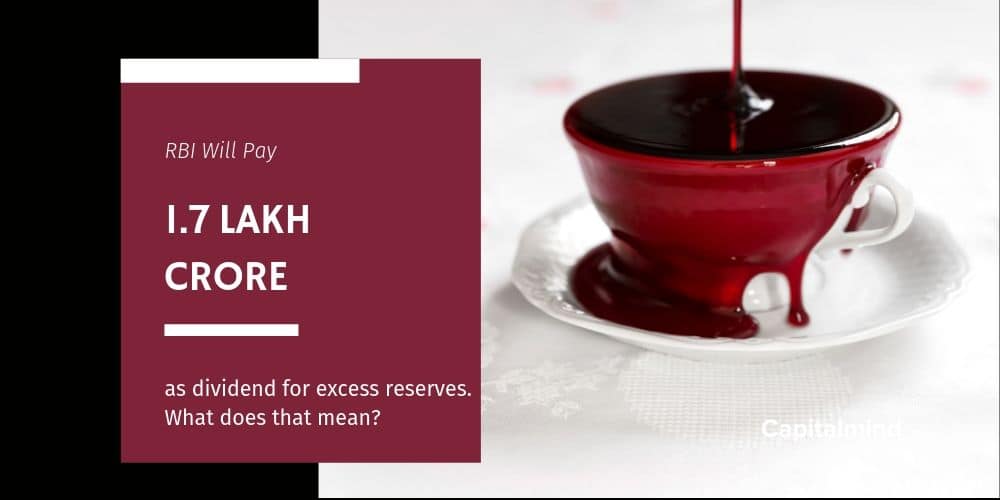 The RBI has finally decided to transfer 1.76 lakh crore from its balance sheet to the government as a dividend. We have written about this before and believe this is a positive development. Some people hate it and speak of it as the government “raiding” the RBI coffers, but having analyzed the issue in detail, my strong feeling is that such opinions are grossly misinformed. In fact, this should have been done years earlier.

The extra money comes from a set of changes to the policy of how much the RBI pays out from whatever it earns. We’ll go into more, but first:

Read our post about this: Abeyaar, the RBI is hoarding too much capital.

There is now a policy of how much the RBI will distribute. Essentially, it will:

How will the RBI pay?

This isn’t about printing money.

Update: This is wrong.

The government has an account with the RBI. So does every bank. This is a liability of the RBI. The extra “reserves” are also liabilities. All the RBI has to do is keep assets as they are, and shift the amount from the “reserve” to the government account. When the government spends, it will pay some bank or the other, and that bank’s account in the RBI will get the credit.

Essentially, there is no need to print more money. Or to sell gold. Or to sell forex reserves. This dividend will have no impact on RBI’s assets.

(Apologies for the confusion)

Where will the Government use the money?

Most likely, this will go to recapitalizing banks, at Rs. 70,000 cr. in total. The remaining will still be available for spending.

It should impact bonds positively. The government had planned to borrow 4.5 lakh crore this year – but with this windfall, it may need to borrow less. If they borrow less, the government bond market should be thankful and will look at lower yields tomorrow.

This also allows for a better universal credit rating that allows India to borrow from countries like the Euro or the Yen, where rates are sub 1%. This can replace some of the rupee debt in India.

Also, it allows the government some room for some stimulus. We don’t know what they plan to do, though.

This is a good change. The contingency buffer should be in the government, not the RBI. After all, it’s the government that recapitalized the banks (not RBI). This will also give a much desired head room for the government. Let’s see the nature of future announcements – at least this one is now out of the way.