This is a quick note to the shady promoter community. If you’re looking to hoodwink the public investors then this series is for you. It will help you find interesting and time tested techniques to hide bad performance, create earnings out of thin air and find more people to dump your stocks on.

This is also a quick note to investors. Read the above paragraph.

Financial shenanigans are actions taken by companies to misrepresent their financial performance. These actions by managements mislead the users, some of them being investors, government authorities, banks and credit rating agencies about the true economic health of the company.

These can vary by degree. From making a few minor adjustments to boost revenues and profits, to outright fraud. But that line is too thin. Managements making minor adjustments are playing with fire as one does not know to how big this will lead too. Take the case of Satyam, Ramalinga Raju in his resignation letter had said ” It was like riding a tiger not knowing how to get off without being eaten”. Raju had confessed to a fraud of over Rs 8,000 Cr, with the company having non existent cash of Rs 5,040 Cr. This certainly did not happen overnight and would have started years before it actually ballooned to a situation which was uncontrollable.

The question then to ask is  – could the Satyam fraud be detected earlier? How did the auditors not detect these developments over the years? Can we as investors/outsiders protect our capital from the next Satyam?

In this first part of the Financial Shenanigans series, we will highlight a few of the tricks that companies use to massage their numbers by manipulating earnings. There are various ways in which the company can do this and we will look at how these are done in detail.

But First: The Types of Shenanigans

Financial shenanigans can be classified as shown below:

In this post we will look at how companies manipulate earnings. The company can either

Earnings manipulation are carried out by managing revenues and expenses that are recorded on the P&L statement. We will look at few ways in which companies either manage revenues or expenses or a combination of both to present an incorrect picture to the readers of the financial statements.

Company’s can book revenues too soon, push revenues to a later period or book completely bogus revenues to manipulate earnings.

For instance if the company is seeing tough times or estimates that the  business environment going forward is tough, they can book revenues early, which will ensure that their is no drastic drop in revenues and earnings.

On the other hand if it is doing very well currently, it may want to save for a rainy day and postpone booking revenues later in a lull period. This is to meet the guidance they give to the analyst community.

Companies must record revenues when they are earned and not when money is received or contracts signed. Let us explain this with help of an example – In the subscription business, the company receives the subscription fees before the customer utilizes the offerings of the company. From Prepaid mobiles, to TV subscriptions, this is the norm. If the subscription fees is Rs 15,000 per annum, the company cannot record the full amount as revenues on receiving cash from the customer. The company has to record the revenues on a pro rata basis, Rs 3,750 per quarter. But some companies will boost revenues and book the full amount on its receipt, which is not the right way to record revenues!

Another tricky example is in banking or finance. Let’s say a fee of Rs. 1 crore is charged for a loan of 5 years. Technically the fee is fully received upfront, so the bank or NBFC can record the Rs. 1 crore in revenue. But instead banks were doing crazy things with this kind of accounting: FOr a loan of Rs. 10 cr. for 5 years, they might charge 10% interest rate and a fee of 1% (10 lakh). What if they did something else – charged a Rs. 1 crore fee, and for the interest rate, reduced it to 8% a year. That means they will “front-load” the returns on the loan – meaning, get revenue now and sacrifice revenues later. So, the better way to account is to spread fees over the period of the loan.

Below is the list of stocks from Nifty 500, where receivable days have increased by 100% over the last 10 years. 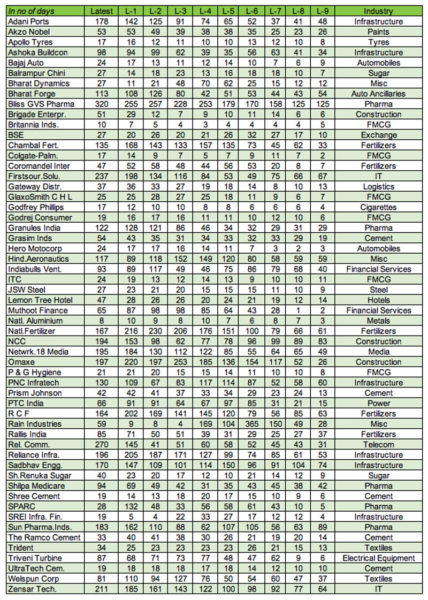 There are total of 56 companies, where the receivable days have gone up by 100%. Some of our observations from the above data are

While the above data shows the increase in the collection days of the companies, factors specific to the companies and industry will help us understand as to why exactly have the receivable days gone up for each company.

Companies resort to channel stuffing in times of slowdown to boost revenues. Products are sold to dealers and distributors even though they may not have requirements. Companies provide discounts or may have other arrangements to move the inventory from their units to the dealer’s showrooms, thereby recording revenues. Automobile companies regularly resort to this technique. There is no way to find out if the company is resorting to this method by reading the financial statements, as no company would provide this information.

We have to analyze the numbers closely, for instance if a company is recording good top line growth however the industry is sluggish, then one reason can be channel stuffing. General enquiry at the dealer’s showroom would throw light on this.

Other Ways to Boost Revenues

Below are the Q1FY20 results of Endurance Technologies, a leading auto ancillary player in India. 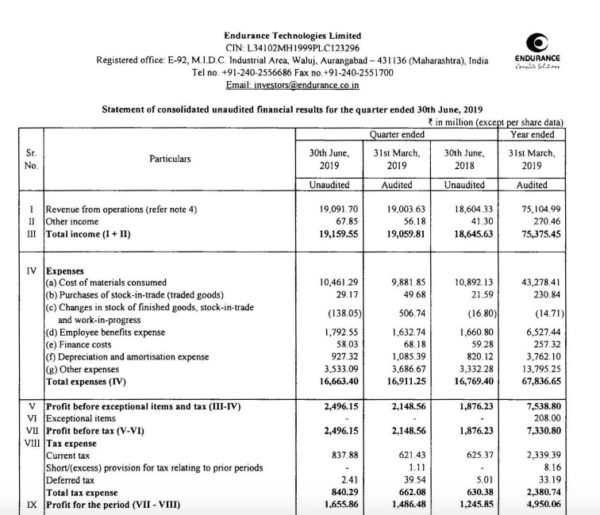 Revenue growth for the quarter is 3%. However this is what we found when we went through the notes to accounts.

Basically the company has changed its revenue recognition policy. Earlier the company used to recognise grant income from the government on claim submission, however now it recognises grant income upon the sale of goods. This change in policy amounts to additional income of Rs 70 Cr that has been recorded as revenues. Adjusting for this the revenues have fallen by 1%.

The point here is to be aware of these adjustments that companies make, this does not mean that the company is resorting to unfair practices while reporting its numbers.

Below are the Q1FY20 revenues of Spice Jet.

Other income of Rs 143 Cr was recorded in the first quarter, the note related to this is as below

Below is what the auditors have to say on this issue

The Rising Receivables from What Became DLF Itself

Where you would see this is in the related party transaction list – DLF assets was listed as having some 2,600cr. as a sundry debtor, and then, with around 2,200 cr. of unbilled receivables.

This is against a revenue of about Rs. 10,000 cr. so it was a significant number.

Eventually, DLF Assets was merged with DLF. So that much revenue just didn’t exist!  You have to be careful about this – and much of it is visible in cash flow, since rising receivables means cash drops and debt has to be increased to pay for other expenses.

As you can see, as  a promoter, there are lots of little things you can do to increase the revenue side of the equation. There are ways to build screens to see if receivables are rising, or if they are doing shady things to increase revenues and how you might want to investigate companies on this metric.

In Part 2, we will cover the other side of the earnings shenanigans: Manipulating Expenses.