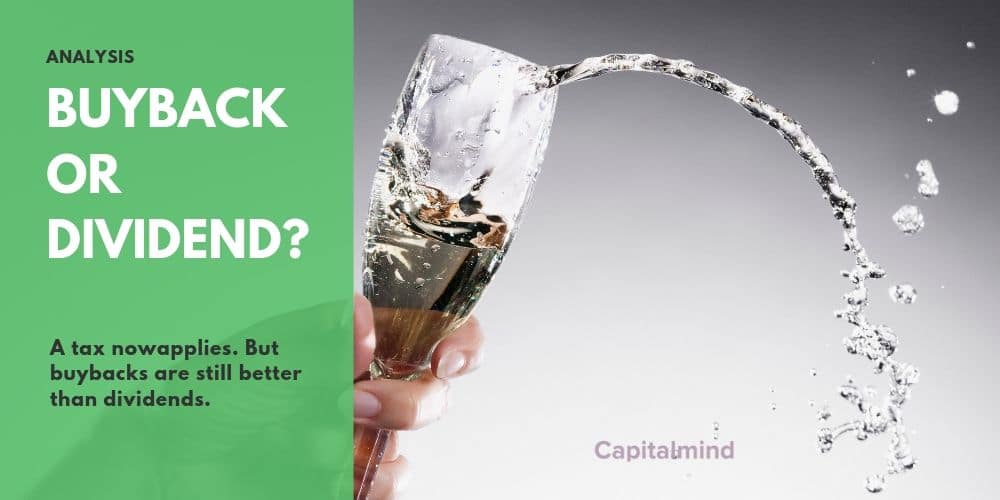 Budget 2019 introduced a change in the rules for buybacks. Any buyback of shares of a company gets taxed at 20% if it’s done after the budget date, i.e. July 5, 2019. This is a setback for companies that were looking to use buy-backs to return cash to shareholders.

Note: We have revised this post for a change in the dividend tax numbers (DDT is 15% and not 20%).

The other way to return cash is through dividends. But dividends are taxed at  20% at source as well. So people chose the buyback route, and that too, a tender buyback, so that even promoters could tender and receive money. This was brilliant because:

This was great. Until now. The budget now taxes buybacks at 20%, so a company will have to pay 20% tax on any shares bought back.

Side Note: How does this impact current buybacks?

Companies like Infosys and Wipro have buybacks in progress. Any shares bought back from now on will have to pay tax. Wipro’s is a 10,000 cr. buyback and it is in the final stages (only a tender period is remaining). Others are going through stages of approval, which may be changed because of this tax applicability. If you’re a shareholder in a company that’s announced a buyback which isn’t fully done, you should expect some changes – either to the quantum of buyback (cut due to taxes otherwise payable) or a cancellation.

But Will Buybacks Not Longer Happen?

Let’s first understand the situation. Companies were choosing buybacks to pay out money to shareholders. Because, if they paid dividends, they would:

Consider that a company wants to distribute Rs. 1000 (out of its profit after tax). It chooses to pay that much as dividend. It has to pay:

Effectively the government gets 29.25% of the distributed income as dividend in total, and remember the money distributed was after tax.

Let’s say a company has Rs. 1000 to distribute and it chose a buyback route. Then:

Simply put, a buyback results in a (big) investor getting 76.7% of the amount distributed, versus only 70.7% in case of dividend. Why would you choose a dividend instead?

Promoters might change the amount distributed, but for a company that’s generating cash and doesn’t want to use it, the buyback route is still a better way to pay out money.

But: Related Party Transactions Could Rise?

In many cases, promoters were doing buybacks so that they would get money for themselves without having to pay much tax. There’s a fear that when you tax buybacks, they will choose shady mechanisms to transfer money to themselves, using related party transactions.

But note: these are happening anyhow. Whether it’s a famous airline, or a chota-bhai group, accusations fly all over the place about how these companies have seen related party transactions that aren’t above board. The point is that if companies wanted to be shady, they would be shady anyhow. A 20% tax isn’t exactly a tipping point (though it will be used as justification).

Buybacks Here To Stay, but More Companies Will Retain Earnings

We expect the number of buybacks to come down substantially. Instead of giving the government a big chunk of a distribution, we believe many companies will simply keep the cash with themselves instead, searching for opportunities.

This isn’t a bad thing. Even a Warren Buffett doesn’t pay a dividend, and doesn’t even invest the cash too much. He’s doing quite well.  But in India, the payment of a dividend (or a buyback) tells you that the cash is real. Because it might not be, in many cases.

For most other companies, to get better ROE and better Earnings per share, and because they are far better than dividends, the buyback route rocks. We should see enough buybacks going forward, even if there’s a tax now.