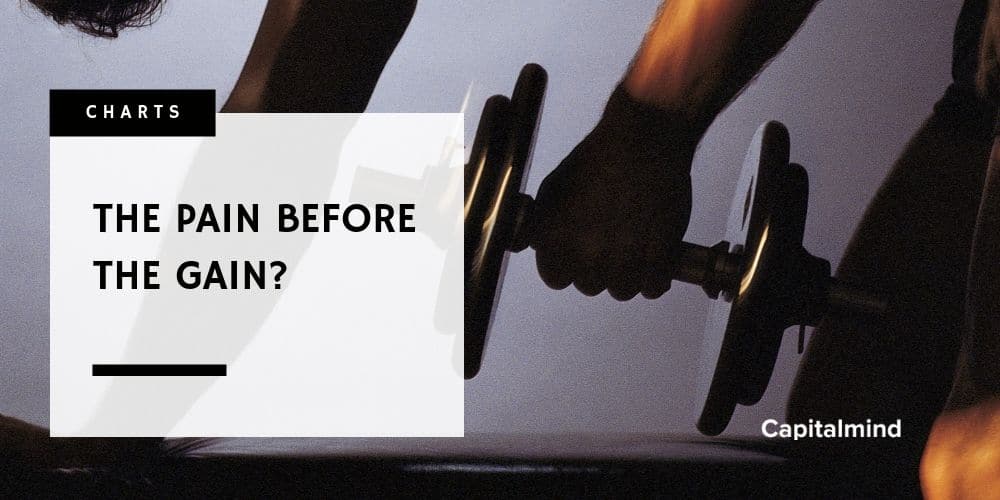 Budgets generally appease one set of people while ticking off another set – this is also called Balancing the Budget. This budget though seems to have pissed over literally everyone – from the High Networth Individual to Foreign Institutions.

Budgets at max are more of policy statements than real pivots for the economy. Once in a way, there are major announcement that make the budget an event, but most times, it’s just another day with lot of narratives and very little data. This will be especially true going forward since with GST, there is very little scope to change duties and structures.

For the stock markets, other than the day of Diwali, this is a day they look forward to for it is looking at the tone than the action promised. While we investors who invest in businesses that have been run by other people think ourselves as business owners, we are actually side-car – we have no control over the company other than hoping that the driver doesn’t drive us into a ditch.

While the number of people who actually invest and benefit from the stock market (directly) is a minuscule percentage of the population, the noise we are able to make would make it seem that there is a huge herd just behind the hill waiting to smoke anyone who is against the markets out.

It’s no wonder that many were horrified to hear the Finance Minister when asked if the markets do not bother her at all, Sitharaman said, “I think it will take a while for me to get too carried away by that”.

The stock markets are an important barometer of the economy yet they are the cart and not the bullocks. In other words, they react to the changes in economy and while they are leading indicators, they never are change themselves.

Stock markets love low; well strike that, zero taxes on capital gains, low interest rates and plenty of liquidity. The US economy is doing extremely great but the stock markets aren’t. Not surprisingly Fed which till recently was raising interest rates back to normalcy has now started cutting them.

There are only two things that are certain in life – Taxes and Death. Even when money of the kind that was popular in ancient times – Gold and Silver were yet to be invented, in  Mesopotamia everything was taxed – from livestock, the boat trade, fishing to funerals.

Our markets are disappointed since the loophole that allowed transfer of cash from company to shareholders without either having to pay a substantial tax was closed. I wouldn’t try to argue whether this is a good thing or a bad thing but if Dividend Income is taxed, its essential that alternatives are taxed to ensure uniformity.

Currently, individuals for example who are part of a PMS are taxed for every profit that is booked by the fund manager and one that is carried out in their accounts. But the same transactions if had been carried out by a Mutual Fund will not impact its investors. Distortions like these impede development of the financial sector and needs to be removed.

Coming to the markets, after 6 straight months of very little volatility, we saw a day when Nifty fell 2%. While a 2% fall is piddly in nature, it was as if all hell had broken loose for recency bias dictated that very few have experienced the volatility of the past.

Here is the table that lists the number of times Sensex had fallen 2% or more in a year. 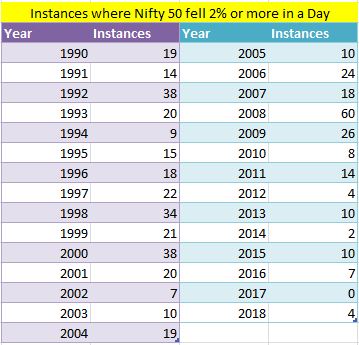 As you can see, since 2012, we have had barely double digit instances other than for that one year – 2015. This is not unique to India either. As the following table shows, same is the case with even United States where volatility has been missing for years on end. 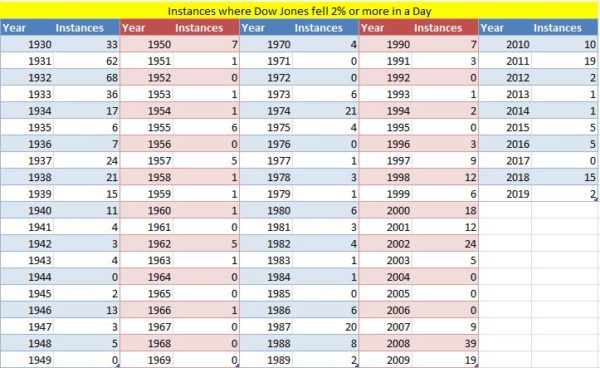 Infact, the only period of Volatility was in the 1930’s.

Volatility can be a friend if you can harness the advantages. While negative volatility is a risk for leveraged players, given how much we have come off the top, its better that we are seeing this now for this shall force out weak hands and can provide a platform for the next bull run.

But is the weight of evidence pointing towards the start of a bull rally anytime soon. Lets look at a few charts;

Lets look at 3 year rolling returns of Nifty Midcap 100 and Nifty Smallcap 100. While both are still positive, they are down pretty deep from their highs in recent times not to speak about the 3 year returns achieved during the great bull run of 2003-2008. 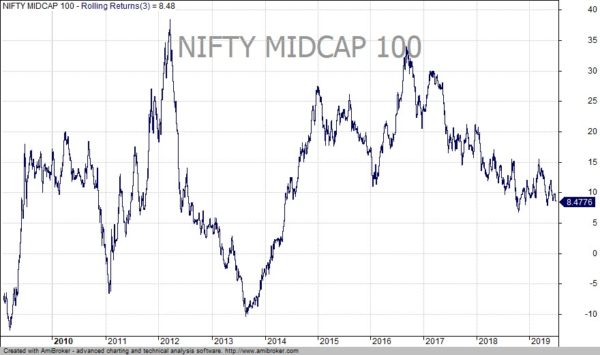 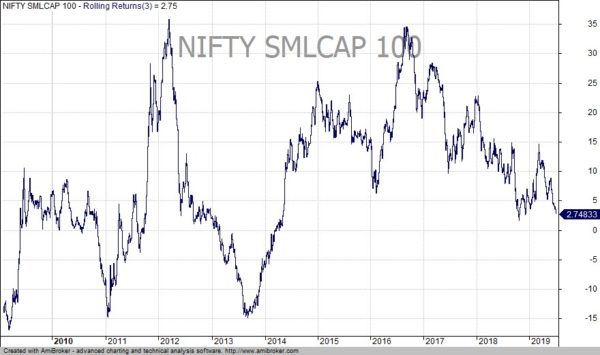 On the other hand, look at points of time when a bull market started and you would notice that they were negative. Investor’s capitulate at bottoms and this generally happens when returns are not just unattractive but negative.

On the other hand, look at this chart 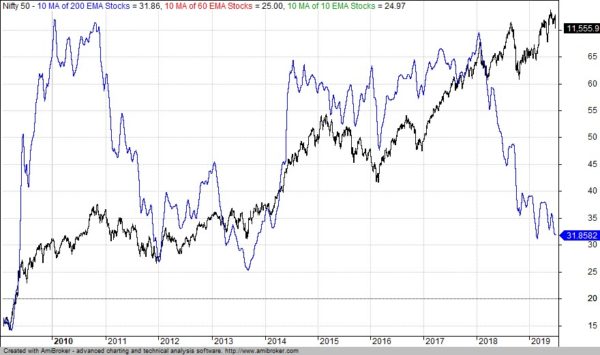 This chart plots the % of companies that are trading above their 200 week exponential moving averages. In other words, this plots the percentage of companies that are trading above their moving average of nearly 4 years. While there is no way of predicting whether we shall end around the 30 levels or go down deeper, if this is unlike 2008 when it was a Global catastrophe, the end of the downturn is closer.

But what happens in the year forward for stocks that have gone below their 4 year moving average?

Of those, 68% of the time, stocks ended up in positive mode by the end of a year since they had crossed below. Of the remaining, most stocks ended up losing nearly the total value and getting delisted.

Currently, everything that could go wrong is going wrong, at least in the mid and smallcaps. The question though is, have enough weak hands thrown in the towel. A strong correction is not out of question though given that valuations while still expensive when compared to their historical lows have become much cheaper.

Mutual Funds for now have been able to continue raising funds which speak about the continued confidence even as returns have been in shambles over the last 18 months.

The fundamental outlook remains dim but isn’t there a saying, it’s Darkest before Dawn?