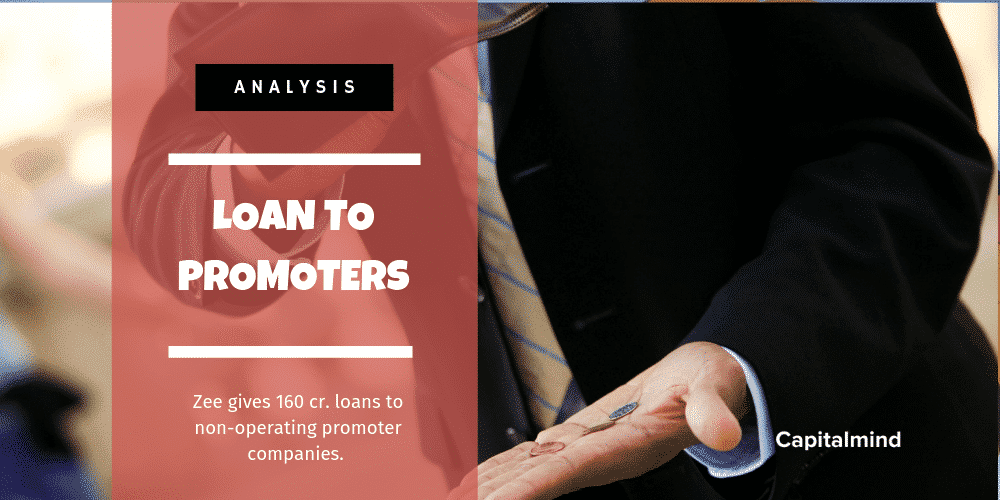 Zee has been in all sort of news lately centering around its promoter group leverage. For those who don’t know, Zee promoter backed firms (which don’t have any relation to Zee) are unable to pay their debt. They’ve caused a huge set of problems for the mutual fund industry. Read our longer post on that.

The only problem is that most of the debt has been raised by pledging promoter shares of ZEE (and Dish TV) and this debt has been subscribed by many debt funds. The Zee promoter is known to have reached a deal with fund houses not to sell pledged shares until things get resolved. Some fund houses like Reliance broke out of the league and sold the pledged shares, ensuring investors interest was safeguarded. This has led to price of stock going down.

The market seems to think that hey, Zee itself is a debt free company. There’s no problem in the media behemoth itself. Only the promoter is in trouble.

But that’s not really the case. A BSE revelation has proved otherwise. 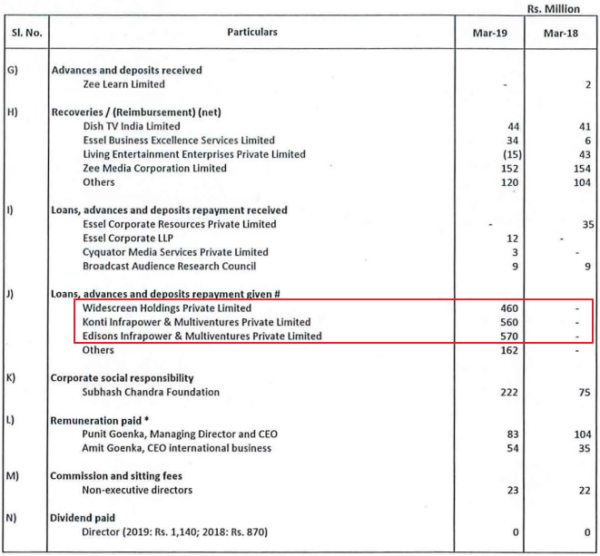 Note that Zee has given loans of roughly 160 Cr to promoter group companies. The above disclosure by ZEE showcases the same.

The interesting part being the loans have been given only in last year. It was not a regular affair. We assume that the loans were given in first quarter of FY19, before things blew out of proportion. We can see interest payments done by these firms in the same disclosure. Most of the mutual fund exposures has been Konti and Edisons Infrapower, both non-operating entities that earn no money.

Additionally, note that while each of these promoter entities has taken a loan from Zee, their balance at the end of the year is HIGHER than the loan amount. Meaning they haven’t paid some part of the interest yet.

Is This a Problem?

Most of us here know that Subhash Chandra’s Infra group is in trouble. They are not in a position to pay back unless Subhash Chandra finds some buyer for his stake in Zee. Hence these 160 odd crores are likely to be a bad loan for the time being.

The important question here is, will this repeat? Considering Zee promoters need money more than ever? Once everyone knows promoter led firms are in problem, any money lent to them will be scrutinized and questioned. Zee needs some strong credible reasons for further lending to promoter led firms.

Trust is An Important Factor

The most important thing for a firm is the trust factor. Investors always thought that Subhash Chandra always kept his crown jewel Zee clean.

Yet, Subhash Chandra couldn’t keep this up, and borrowed some 160 odd crores from Zee for his promoter companies. Now things have come to Zee’s books. This will start enforcing investors to think twice before investing. It not necessarily means there is more to come, its the sentiment which has got hurt. It always goes by a saying

“Once you lie, you are always a liar”

A similar example can be seen from Yes Bank. Even though Yes bank is repeatedly denying more NPAs, investors are not buying it. Yes bank was caught in cross hairs with RBI for not disclosing NPAs. And eventually after the CEO was sacked, the new CEO has provided for a large number of NPAs. The effect is still echoing for them as the stock has lost nearly 75% of its value from peak post the crisis.

Always a stock has some embedded value for trust factor, once that gets eroded, the stock çan see a tumble.

Another example is when government intervened for oil marketing companies (HPCL, BPCL, IOCL etc) to reduce the petrol rates by Rs 1. The impact on the firms book might be 8-10%, but stock corrected by nearly 25-30%. The basic understanding was government has decontrolled the pricing of fuel, but once it steps in and tries meddling with the price, the whole trust factor gets eroded and it brings back skepticism on government’s interference when prices of oil are high.

The issue isn’t that only 160 cr. was lent to problem companies.

The issue is that the trouble at the promoter level is coming down to the company itself. A buyer of Zee would therefore worry that Zee’s money is stuck in problem debt, and that will worsen the attempts of Chandra in selling his Zee stake in the first place. Also, what’s to stop them from lending a lot more to such companies in this year?

It’s very difficult to understand why certain related party transactions are done. A company may be giving real business to a relative of a promoter, or to an entity controlled by the same promoter, and that’s usually fine. However, giving loans to non-operating holding companies (who have no cash flow of their own) and negative tangible net worth is a bad idea. At least the mutual funds had shares pledged to them, Zee can’t even have that (you can’t pledge the shares of a company to the company itself)

This is shoddy corporate governance. But, like they say in the movies, Picture abhi baaki hai.