There has been lot of drama going on in debt funds. It all started with IL&FS, followed by DHFL and so on and so forth. And now, it’s gone to the Reliance Capital camp.

The torch bearer of Anil Dhirubhai Ambani Group (ADAG). The speculation were so rife that, Anil Ambani himself had to come on air and clear the rumours. We have already written a article on Reliance Capital and Its Debt Woes.

Reliance Capital has issued nearly Rs 12,800 Crs worth of bonds. The bonds expiring in this quarter are roughly Rs 750 Crs. out of which only Rs 275 Crs are due and are maturing in next one week. Post that it can have a breather till the fag end of 2020. If Reliance Capital can get through for another six months, then it will receive most of the payments for its stake sale of its AMC for Rs 6,000 Crs to Nippon. It can lighten its balance sheet and will be in a comfortable position. It will get time to think through and re-strategize its debt reduction programme.

As a pre-emptive measure for investors who are risk averse and are unwilling to take any risk in debt market, we are writing this article citing the exposure of Reliance Capital to various mutual funds.

The Mutual Fund industry has an overall exposure of Rs 2,542 Crs for Reliance capital and its subsidiaries Reliance Mutual Fund has a maximum exposure of 26.42% followed by Franklin at 21.88%. Even at 21.88% Franklin seems fine considering the AUM is too big for a sizeable impact. 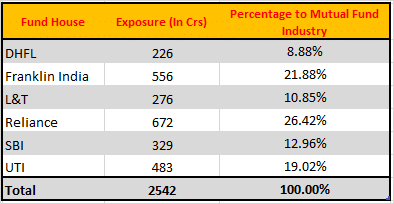 The fund houses which do not have any exposure to Reliance Capital Debts are as below.

(Note: This is as per our limited analysis – there could be other exposure or cross-guarantees that may arise)

If we sort in order of individual funds, the maximum impact can be recorded in DHFL funds followed L&T and Reliance. Below is the list of funds getting impacted if Reliance Capital defaults. 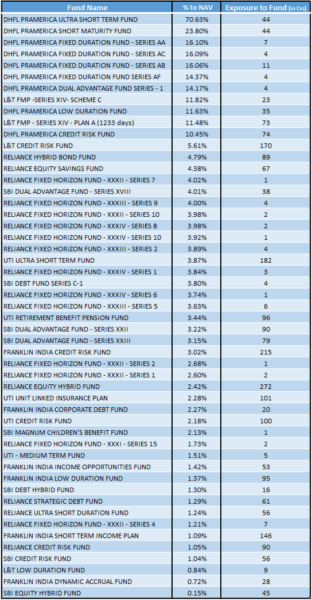 Note that an exposure below 3% is probably not very relevant, but for higher exposures you might want to consider action.

We have checked for following firms exposure for to Mutual Funds.

If any other subsidiaries have exposure to mutual funds, we have not included in our analysis.

How Does Some Fund Own Up 70% of Exposure?

Some investors who have put in DHFL Pramerica Ultra Short Term Fund money last year after doing a complete due diligence and even would have taken a note of Reliance Capitals exposure of 3-4% in the portfolio. After seeing it today after exact one year will astounded at 70% exposure. Let break this up on how it worked.

Why Does This Happen?

Post IL&FS crisis the debt market has seen a lot of trouble. Liquidity dried up, yields were high, firms started defaulting etc. In such instances, debt funds will see lot of redemption pressure. The fund manager then sells the most liquid debt in his portfolio. The AUM keeps dropping and the bonds which are illiquid will start seeing higher exposure (even when the quantum value of the bond remains same). The illiquid bonds will typically have rating downgrades and are in bad shape, which no one want to touch, so there are no buyers. Once you sell most of your liquid good rated bonds, you will have pile of those which cannot be sold.

When an investor put in money in DHFL ultra Short term fund in last May (2018), everything seemed normal and even the exposure of BBNH to the fund was 4%. Seems kind of okay at that time. Things were normal until end of Sep-18. Later in Oct-18, the rating of the bond was downgraded one notch to AA and the exposure shot up to 12.94% as AUM went down by more than 50%. Post that AUM kept falling along with rating downgrades. Simultaneously exposure of BBNH kept going upwards.

Above table denotes how the exposure, rating and AUM has changed in last six months for DHFL Pramerica Ultra Short Term Fund.

Nippon has recently decided to take over Reliance Nippon AMC (still in process). Reliance Capital is roughly getting paid some Rs 6,000 Cr for the stake takeover. And RNAM has an exposure of Rs 671 Crs. Now if Reliance Capital defaults on RNAM holdings, it puts Nippon into a tight position.

Nippon after paying some Rs 6,000 Crs, will not like RCAP defaulting some Rs 670 Crs on its funds. Assuming somehow Nippon ensures RCAP pays for its exposure across its mutual fund, then problem is Reliance Capital cannot selectively pay for bonds held by RNAM. RCAP needs to pay for all bondholders in the same way.

If before that RCAP defaults on any other bond, then all the bonds issued by RCAP will put into default rating. Meaning all the mutual funds holding RCAP bonds need to write down their exposure. And it will subsequently give a bad name to the fund house, and perhaps result in more trauma.

(DHFL case was different as most of the funds had exposure, In Reliance Capital most of the fund houses have stayed away and only selected few have exposure). So technically Nippon may not allow Reliance Capital to default until the deal goes through and all the RCAP bonds held by it are repaid. Though we cant surely say about this, but it’s interesting to see how it plays through.

In all the investors are the ones who will lose some of their capital if firms default, at least in Mutual Funds. The notion of debt funds being safe is not true. We need to understand this, as investors.

After seeing the massive DHFL default, many would have seen a pinch in their debt fund investments. It would be a wake up call for risk averse individuals who think debt mutual funds are safe. Nothing in this world comes without risk. If debt funds are given higher returns than banks, then its for the risk involved: so if you were in for the returns, you’re in for the risk as well.

For the above funds, if a problem exposure is greater than 5% you might want to question the fund on what they will do to mitigate. If you aren’t satisfied with the answer, you can consider keeping less exposure to such funds.

If you’re worried about defaults in general, then your best choice is an overnight fund, or a fixed deposit. Returns will be correspondingly lower.

Reliance Capital is unlikely to default in the short term, until the sale of the AMC to Nippon is complete. However, if they aren’t able to honour further commitments due to delayed sales of other assets, they might end up with a credit downgrade, even for a few days delay, as DHFL had. If that happens, the investments by the debt funds stated above may take a hit, if they haven’t already sold them by then. The risk is visible now, but we don’t know if the bad thing (“default”) will happen or not.