This is the first in a series of articles that detail out how you can build your own quantitative investment or algo trading strategy. The holy grail is for a computer to find the best strategy for you and automatically make you money. We won’t be teaching you that. Because if we knew, we would not tell you.

But there’s a way to get to a point where you can build yourself a strategy through purely quantitative inputs, meaning: using just data to make decisions. Here’s a series on how to make this work.

What is the single most important factor that determines the success or failure of an investment?

While there are a lot of variables, one of the keys is the behavior of the investor himself. This is what makes investors and traders successful is their ability to stick to a specific set of rules – rules that may have been hard coded or gut based, rules that maybe binary or multirate, rules that could be as simple as one line of instructions or rules that have 200 checkboxes to tick.

Warren Buffett says he has just two rules which helps him in picking stocks . But if you were to ask James Simons who founded Renaissance Technologies, he would most probably come up with a complex mathematical equation at the end of which lies the answer as to whether the investment will make money or not.

When we start off in the world of investing, it’s very much probable that we come with literally no real rules – we are clay to be moulded by the environment that we inhabit. But as time passes through, either by reading or by our own trials and errors, we are able to come up with a list of things we know will cause us grief.

Some of these things could be right, some could be wrong for all we are doing is extrapolating a small sample of evidence as the ultimate truth. Annie Duke in her book, Thinking in Bets calls this action “Resulting”. In other words, when focuses on outcome rather than the process that led to the outcome, it can lead to bad decisions.

When it comes to investing, we have basically two methodologies we can follow – Qualitative or Quantitative. It can be both too but once you have a parameter that requires something more than just a number that is not subject to bias, we are well and truly in the Qualitative space. Meaning: You have to use instinct or “gut feel” or something beyond data to make that decision.

Much of Fundamental Investing is Qualitative in nature. Fund managers speak in glowing terms about the companies they own, the nature of business, the growth prospects and of course last but not the least, the management quality.

While some of these can be quantified – for example, you can say that I will look at only profit making companies or companies that are growing above a certain rate of growth, when it comes to judgement of the business, its future and management, its purely in the domain of qualitative.

Much of trading strategies though fall in the area of Quantitative – the answers are always binary in nature and the inputs are usually numeric. (There are “artsy” strategies like Elliott Wave Theory, but we’ll leave those out)

So, a strategy of buying stocks that will move above a certain moving average is a Quantitative strategy since the answer at any point of time will be either a Buy or Don’t Buy.

This post is a curtain raiser to the series that you should be seeing shortly on how to go about building, testing and finally implementing a quantitative strategy.

The basic rationale for testing a quantitative strategy is not about making money – while that is the true and ultimate aim, the basic rationale is simply about Buffett’s Rule No.1 – Never lose money. Or in other words, the idea here is to test our hypothesis to see if it is even worthwhile to chase the same rather than chasing only to regret later.

In the world of Scientific enquiry, one methodology that goes by the name of Hypothetico-deductive model is one that is most suited when looking  at building quantitative strategies.

The model starts with a basic experience and observation.

Models aren’t build of thin air. While one can build a model by data mining for the best return using past data, the future returns of such a model will be way disappointing. Good models have a foundation that is based on market observation and knowledge.

The next step is to write a Hypothesis on what we believe in and one we hope will hold up when we actually test it out. For example, if you are building a momentum portfolio, the hypothesis is that stocks that are going up will continue to go up – not to infinity but you get the point.

(An example is: Buy on Monday, Sell on Friday. Actually, no, that’s a lousy example because there’s no real reason it should work because Mondays or Fridays aren’t special. But an all-time high is – and buying when a stock makes a new high, and selling when it retraces 20% from a high, is a good model on observation.)

This helps us in understanding the results. Without a hypothesis, we are in the blind as to what we should expect. A good hypothesis also lays out the objectives of what we expect from the results. This helps in avoiding curve fitting to an extent since we know what will make us discard the idea and what could make us dig further.

(An example is: If you buy when a stock makes new highs, it’s likely to continue upwards until it loses momemtum, by which time you could have made a profit)

At this stage, not only have you a set of Rules you wish to implement but have a deep understanding of the idea behind.

Next step is Data Collection, Coding the Model, Testing and Analyzing the Results and finally deciding whether its worthwhile to follow it up or not.

In this series, we shall cover from basics to advanced the way to ideate, build, test and implement a quantitative trading or investing strategy. 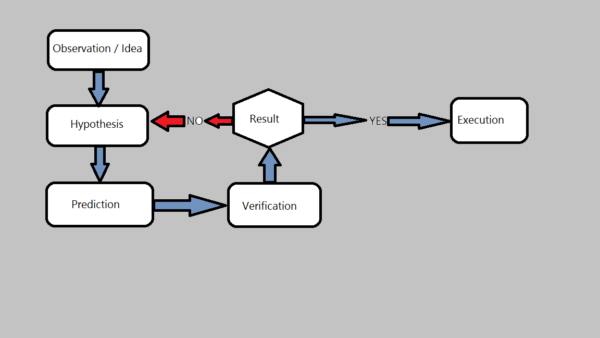 There are obviously issues even with quantitative strategies:

We shall focus on all the above and more as we try and help you understand Quantitative methods better.

So, lets get Started! Shall we…