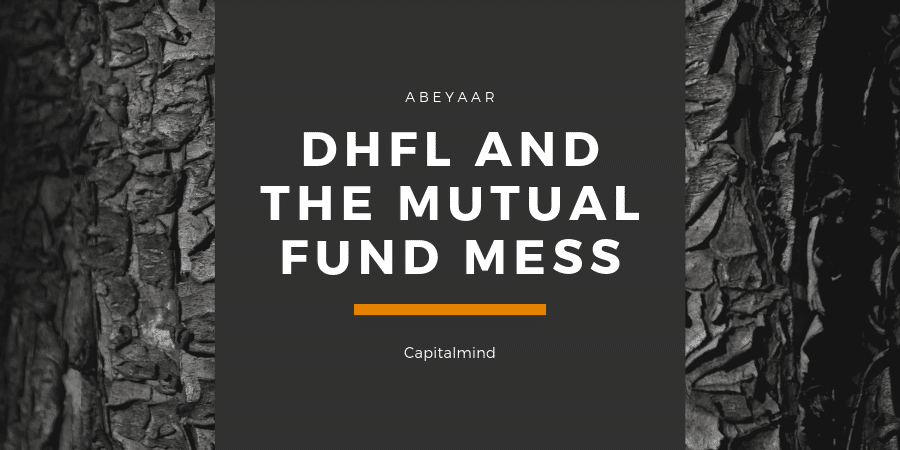 In simple terms, tell me what this thing is with Dewan Housing Finance (DHFL) defaulting. Like really simple.

Like I’m just a fellow who put money in a low risk debt mutual fund because they said it’s better than a bank account and now I have apparently lost money. Because some four letter word defaulted. What is this?

So your mutual fund has given hajaar loans to different companies, one of which is DHFL.

DHFL couldn’t pay back some interest on time, on some loans that it had taken. These loans are in the form of bonds – if you own a bond, you are supposed to get interest, or principal, or both at some points in time. If they can’t pay money on any one of those points in time, it’s called a default.

Can’t they pay tomorrow? I do that whenever I run out of money.

You can, of course. But if you make that a general phenomenon, people will abuse it and keep saying we’ll pay tomorrow, and look suddenly we have a Vijay Mallya or a Nirav Modi or whoever.

This is why, over the years, the rules for bonds have become: If you can’t pay on the exact date, or if you try to pay less money, you are considered in default.

So why should this affect my mutual fund? He’ll pay later no? He said so, apparently.

Yes, DHFL said he will pay within a week. (See this release)

Update: Apparently most investors have received the payout from DHFL now. Read on, though.

But Doesn’t That Solve Everything?

Well, no. If your mutual fund held these exact bonds that were repaid, then everything is hunky dory.

But there are quite a few different bonds. Some have different interest payment dates. Some mature in 2019, some in 2021, some even later. They’re all impacted and they won’t “cure”.

Because of the complexity of the whole deal. Let’s look at it:

Wait wait. That is all okay, but since DHFL has now repaid! Things go back to old values?

“Curing” a default doesn’t mean the rating agencies can immediately move the rating back up.

The SEBI circular states that the minimum curing period to upgrade a rating from Default to a higher grade  is 90 days. (See circular)

That means until 90 days are past, the rating remains “D”.

So the 75% hit continues for 90 more days, even if DHFL continues to pay back (of course if it doesn’t pay back something else, then the 90 day period will restart)

But I hold these mutual funds! Should I hold them for 90 days more?

The question really is: Is DHFL able to pay back money for 90 more days? There’s trouble at the DHFL end of course. It started as a panic fall in September 2018 (read our post) and since then, DHFL has clamped down on further lending.

It has only focussed on getting money from existing customers (typically, homeowners who have borrowed against their house) and paying back people on time. It has apparently paid back over Rs. 35,000 cr. of loans since then. And it has in the process sold parts of its loans, and even its holding of Avanse and Aadhaar subsidiaries that have found buyers.

This is typically a good sign, in that there is repayment coming through. But at the same time we have to be worried about a term called cross default covenants.

Excuse me, can we speak in English pliss?

Okay so if I give you a loan, I can say that you pay me back interest every year. For five years. But I can add a clause saying if you default on your loans to anyone else, then please pay me immediately. Because I am afraid that if you default on someone else he will come and take your sofa and TV and you’ll have nothing left to pay me later.

So when you do that, you create a covenant that triggers when you default somewhere else. This is a cross default covenant.

Because DHFL has cross default covenants on some other loans, some other fellow will come and say dude, my loan is immediately due.

If the rupees that DHFL is collecting is designed to go to an interest payout or maturity payout as per the schedule, that schedule is gone now. Because everyone can exercise their cross default covenants and ask for their dues.

Which means that even if DHFL paid just two days late, it’s triggered a cluster-F of epic proportions because of rules set into such agreements.

The funds can’t stop you from exiting. However some funds will not allow people to come back in. (They have gated fresh entries). So if you exit those funds, you can’t get back in and enjoy the redemption whenever DHFL is upgraded back (if it is). These funds should be held, unless they have more horrible paper.

Some funds have taken a 75% hit, some a 100% hit, but continue to allow fresh entries. These funds have a complex problem – the speculative entry.

Some funds, like the ones in Tata AMC, have created side-pockets. Those funds you can exit after the side pocket is created.

What is a speculative entry? And a side pocket?

(Meanwhile, my investment as a speculative entry  went from NAV 7.5 to 8.75, a 16% gain suddenly. I just ate up a profit that should have been yours)

To avoid this, some funds disallow entries until full resolution. This prevents speculative entries. But those who don’t, have a risk.

Some of the funds have not gated entries, such as UTI Treasury Advantage Fund. Here we might see a big inflow of speculative money trying to make good on the DHFL move, probably after 90 days. This isn’t great for current investors, but they currently have a 11% loss in the last two days, and the only way to reduce that loss is to stay put, and hope too many people don’t enter.  We would suggest looking at the portfolio and if it’s not too bad, to stick around, in such funds.

What’s a side pocket?

DHFL bonds are illiquid, and rated as a D. So what’s a fund to do? Gate entries? No more incoming money. Don’t gate? Speculative entries.

Instead there’s a way to handle this. The rotten apples, in this case the DHFL bonds, are moved to a separate portfolio. This is a “side pocket” or what’s called a segregated portfolio by SEBI.

This scheme will only contain the defaulted/downgraded bonds and nothing else. It will have the same unit holders as the folks in the original scheme, in the same proportion.

No New buys. No selling is allowed either. (Segregated scheme is to be listed though, to allow transfers between one person and another)

The SEBI Circular on this is here: (https://www.sebi.gov.in/legal/circulars/dec-2018/creation-of-segregated-portfolio-in-mutual-fund-schemes_41462.html)

Rules are tough. Every fund needs to explicitly be approved for sidepocketing so current funds need to take permission, and that permission can take 30 days. During this process, you have to allow for exits without a load. And the new sidepocketed fund can’t have an expense ratio, plus the fund manager’s bonus or some of it is clawed back.

The big problem is: Even if fully approved, the side pocketed scheme has to be created within 1 day of a default.

The original scheme will continue without the side pocket, but it’s NAV will fall corresponding to how much of the portfolio was segregated. You can buy/sell the original fund at the lower NAV.

The sidepocket scheme will also have an NAV – which will correspond to the valuation of the bonds in it. These bonds will be valued at whatever SEBI rules allow – could be 25% of face value at default or even zero in certain cases.

As an investor, after a side pocket you will keep your units of the original fund at a lower NAV, and you will get new units of the segregated fund at a different NAV. The rupee value of this combined is equivalent to the value if they hadn’t segregated.

In a side pocket situation, you will now have two funds, and the original fund can be bought again, minus the defaulted bonds, which sit in the side-pocket. (Or the “Segregated fund”).

This is more fair. Because an investor can exit the “good” part of a fund (maybe she needs money) and waits till recovery happens in the side-pocketed bonds.

However, SEBI needs to relax rules – more time than one day is needed.

Whoa. So Is This Problem Over?

It’s just begun. DHFL has to continue to pay back consistently. Rating agencies have to agree to upgrade. Even then, it won’t be “investment grade” – it will be below BBB. Which means they won’t restore it to 100% (some hit will continue to be taken). Meanwhile, a bond can mature and be fully paid back, resulting in a jump in the NAV.

Tata will side pocket some of its funds. These sidepockets will trade on the markets. It will be interesting to see how they do.

And then, we’ll have some more defaults somewhere else. Because DHFL is not alone. And those defaults will hurt something else.

This is the “risk” part of debt funds. If you are afraid of it, don’t participate – take your money and put it in liquid funds instead. If you don’t mind a wait, you might see some of this evolve and can act accordingly. You might want to check with your advisors about these funds and what to do with them now, and if it all sounds too much, just move to fixed deposits. Over time, a portfolio will see some hits in a mutual fund, no matter what you do – the important thing is to understand, and then take action.

Right now, there’s a debt market situation which could need a rescue. All debt funds are not in horrible shape. We need more regulatory action to help ease out people’s fears. There is a need to have:

We have bird funds?

Abeyaar. The vulture feeds on the dead or the dying. A fund like that would take out the uncertainty of a DHFL bond and instead of pricing it at zero, you could price it at say Rs. 50 for a Rs. 100 bond. Some people will buy that and take the risk.

We need more of the “distressed debt investor” types. And they are coming – they are a huge community abroad.

Okay, okay. So Which Mutual Fund To Buy Next?