For Indians the best away to earn returns on savings was either investing in real estate or buying gold. The millennials are changing trends in the last decade and mutual funds are more sought after to invest your savings.

If we look at mutual fund AUM data, in last 17 years mutual fund have grown at an astounding 20% CAGR. Asset Management Companies (AMCs) have been riding the wave and have grown manifold. They make their money charging an expense ratio as a percentage of funds managed. The Total Expense Ratio (TER) charged includes management fees, taxes, brokerage etc.

For the unknowns first lets get to know what TER is.

What is A TER? How Does it Differ in Direct and Regular Plans?

Total Expense Ratio aka TER means cost incurred by a fund house to run a fund. It includes management fee, legal fees, registrar fee, custodian fee, distributor fee etc. The major part of the TER consists of management fee followed by distributor fee. The TER is calculated daily and will be deducted by AMCs on the same day, which means your NAV includes the impact of fees on your fund.

The TER working differs for direct and regular plans: Regular plans include a commission paid to a distributor (your bank, your broker or advisor) and Direct plans do not. (Direct TERs will always be lower than Regular)

For instance, the TER  of a regular plan may be 1.25%, whereas the same fund direct plan will be lower (assume 0.85%). The differential of 0.40% goes out as the charges for the distributor.

SEBI Guideline Changes: A limit to the TER

More and more money is getting into mutual funds and SEBI is trying to streamline the mutual fund ecosystem. Last time SEBI asked the fund houses to merge its various funds based on the philosophy and risk pattern of the investment. Post that a concept called a TER cap has come into effect from April 1, 2019.

Below is the changes in TER slab based on the AUM of the fund. (Click on the image to open the SEBI Guideline)

The idea is: expenses do not increase with increase in AUM. Expenses will be higher for lower AUMs and will taper off as the size of fund increase. This capping has bought cheers to investors, while AMCs have been put on receiving end.

A company can increase its underlying profitability can be enhanced in two ways either it should be volume driven or margin driven. For mutual funds it has always been volume driven (AUM), but their was some margin play as well. Now with SEBI guidelines coming into effect, the margins (fee part) will further contract and now the game become more of volume driven business.

The below chart shows the growth of fee income for top five HDFC debt funds and Equity funds for direct plans. Note: This is only for direct plans and all values in Crs

The growth in fee income for last 10 months has been mainly because:

TER Increase – A Phenomenon that has been Curbed Since March

In the last few months, AMCs were slowly raising their TER , till March 2019. But since then, the SEBI rule has created a restriction.

Funds like HDFC Equity fund and HDFC Hybrid Equity Fund saw a massive surge in TER since July-2018 by 47.4 bps and 63.2 bps respectively. Post March the TER dropped by 23.1 bps  and 21.5 bps respectively. The case has been true even to debt funds, where slight increase or decrease in TER is carefully monitored unlike equity funds. 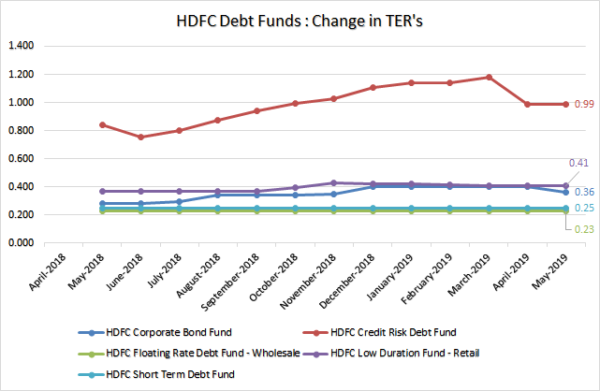 Are the Distributors Going to Take A Cut?

For AMCs the cut in fee income is going to be substantial. HDFC AMC has seen a cut of 6.6% in total fee income (before costs, versus March) This is despite AUM going up 6% in the month!

In direct plans there is not much of an option, AMCs need to take the hit. In case of regular plans AMCs might ask a distributor to take a cut in its fees to bring down the TER.

This might not help the AMCs in the longer run as distributors play a major role in fund flows to AMCs. If you cut fees distribution commissions too much, you’ll end up losing these distributors eventually.

The other way to work around is to do it in a sustainable way. For instance assume a fund with an AUM of Rs 7,000 Crs charges a TER of 2.00% on Regular Plan and 1.2% on the direct plan. Meaning 80 bps is the distributor charges. According to the SEBI guideline, TER should be at 1.50% for TER of that size. The AMC in this case might ask distributors to take a 30 bps cut and another 20 bps will be taken by AMCs. This will make direct plans  TER at 1.00% and regular plan TER at 1.50%.

This structure does a few things:

HDFC AMC is listed on the exchange, and it’s been an investor darling. (Versus the troubled RNAM – Reliance AMC) However, the company may see a decline in earnings on a sequential basis, largely because the TERs have fallen.

However, a lot of debt assets are now moving to the likes of HDFC given the woes of the debt markets. That might just be a saving grace for the company. Over the long term, this may not be a big deal in itself, as the base effect wears off over time. HDFC AMC is excellently managed, has very good ROE and like all HDFC companies, is quite expensive. This TER change is an immediate headwind which will hurt returns in the June 2019 quarter, but the management is likely to work to make the profit impact lower.

On the risk side, this may just be the beginning of regulation in the mutual fund situation, and even HDFC AMC has received a show cause notice for its behaviour in the Zee-Essel promoter debt handling. That regulatory overhand may prove to be heavier than a one-time hit due to lower enforced TERs.

Disclosure: Not a recommendation to buy or sell.