Yes Bank – The fifth largest private lender in India reported a pre tax loss of Rs 2,340 Crs for Q4FY19. This sent the stock twirling down 30%. Yes bank has been in news for all the wrong reasons since last six months starting with RBI saying no to extension for Rana Kapoor, its CEO for hiding NPAs. The stock price has also been reflecting the same by taking a steep dive from 400 levels to 170 range.  Things started looking good when new CEO stepped in and the NPA divergence was stated to be well below the mark. Again, something else was waiting for its turn, Yes Bank suddenly found Rs 10,000 Cr worth of below BB level of advances.

Couple of months back some brokerages were still bullish on the stock sighting the promoter issue was a temporary one and was not much a cause of concern. Firms like Macquarie accepted their mistake in assessing Yes Bank and downgraded the stock to underperform. The same sentiment was echoed across brokerages and many have given a sell rating on the stock. Yes banks Gross NPA surged 122 bps to 3.22% and net NPA increased by 68 bps to 1.86% in last one quarter. The sudden surge has led to massive provisioning, affecting profits. It’s always important to analyse what went wrong and what lies ahead.

Yes bank is ahead of its peers at least in recognising IL&FS and Jet airways as NPAs. NCLT has ruled earlier that IL&FS should be not be considered NPA, until yesterday when it reversed the order on RBIs plea. Yes bank took the pre-emptive step and recognised them as NPA and did the necessary provisioning.

The major hiccup in the quarter was in provisioning. Yes bank took a provision of Rs 3,661 Crs for the quarter. Out of this nearly 529 Crs is towards IL&FS exposure and another Rs 550 Crs towards airline company (We assume its Jet airways).  Another RS 2,100 Cr has been towards contingent provisions for future NPAs.

Yes Bank has an exposure of Rs 2,528 Crs towards IL&FS, out of which Rs 2,442 Has been classified as NPA and a provision of 25% has been set aside for the same. Bank has considered 85 Crs as standard and has done a 15% provisioning. Yes Bank exposure to Jet Airways is believed to be at roughly Rs 800 Crs.

Increase in BB and Below Book.

If we see the last quarter viz. Q3FY19, the BB and Below was just 2.5% of the outstanding loan book. It suddenly jumped nearly threefold to 7.1% this quarter, which translates to roughly 17,150 Crs for a loan book of size Rs 2,41,500 Crs. And to be cautious the major chunk of IL&FS and Jet airways have already been considered as NPAs, So its very difficult to gauge what constitute the BB and Below book.

Most of the slippage into BB pool has happened from BBB rated accounts. The BBB rated pool in Dec-18 was at 20.3% and it dropped to 14.9% in next quarter. BB and Below increased from2.5% to 7.1% in the same period. BBB rated book at 14.9% is still a high number. Another 2-3% slippage in BB and Below pool will put a lot of pressure on Yes Banks profitability. 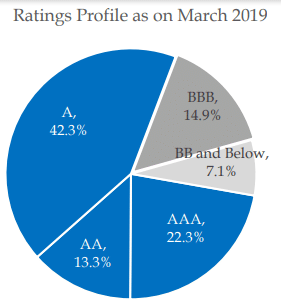 Credit Cost means amount of loss taken to net advances. In Indian context its slightly different, its the amount of provisions to be done on a probable non repayment of loans. It simply means percentage of provisions to the total advances.  The credit cost for Yes bank was at 2.09% for FY19 and for the last one quarter itself was at 1.37%. The 2.09% roughly translates to roughly Rs 5,050 Crs net of recoveries. Yes Bank has stated that out of 1.37% done in last quarter, 80 bps is contingent provision. So for next year the planned credit cost is at 2%  out of which 80 bps has already been done. For next year, planned provisioning will be roughly at 3,020 Crs according to Yes Bank.

The planned provisioning is far more lesser a BB and below book of Rs 17,000 Cr. Even if we go by the provision coverage ratio, Yes Bank is still at 43%. Its still way beyond the most mediocre public sector banks in provisioning. Most of the public sector banks have PCR above 60%. Yes Bank can debate they have faster turnaround time, but its not true always. A meagre 1-2% slippage from BBB rated pool to BB and below pool will put a lot of stress on Yes Bank profitability.

Low Tier 1 and CET 1 A Cause of Concern

Externally capital adequacy of Yes Bank looks good at 16+%, but if we go by CET1 and Tier 1 the numbers need to improve. Yes banks Basel III tier 1 ratio and CET 1 Ratio dropped post the massive provisioning they took this quarter. Currently Tier 1 ratio stands at 11.3% and CET 1 stands at 8.5%. Which is currently sufficient to keep the show running. In FY20, if Yes banks takes a provisioning of 3,000 Cr, then they will be required to raise an additional Rs 1,500 Cr just to maintain Tier 1 ratio at 8% mark. If the provisioning goes to Rs 5,000 (which has been the case for FY19), the capital requirement will be at Rs 3,250 Cr roughly.

Yes bank has approved to raise to raise capital to the tune of Rs 7,000 Cr by limiting the dilution to only 10% at a time. 10% dilution at current market cap means Rs 4,000 Cr. This will be enough only to maintain the buffer levels at 8%, which is not a good sign.

Fee Reversal Will Hit The Revenues

The new Ind AS has a separate criteria for recognising the fee income generated by banks. According to the criteria, fee income generated by banks should be split over tenure of the financial instrument. Meaning a 5% fee on a 5-year loan will be adding to revenue in parts as 1% each over a period of five years. Though RBI has deferred the Ind AS implementation for banks temporarily, but Yes bank has went a pre-emptive step and has started doing a fee reversal. The impact of this is estimated to be about 600-700 Crs for the next year. Yes Bank took a hit of nearly 300 Crs in fee income for Q4 on account of fee reversals. For the full year fee income compromises nearly 10-12% of total revenue in FY19.

Yes bank has stated it will be doing fee reversal for mainly corporate accounts which are greater than 1.5-2%. It will take at least a year from now for the fee reversals to normalise. Yes bank has also stated the fee income will not peak as it used to be going forward as they are looking fee income more of annuity income rather than a one time payment.

Growth and Profitability Slowing Down.

Yes bank grew at 17-18% growth rate this year. Going Yes banks management wants to maintain a similar growth rate of 20% rather than running behind a 40-50% growth rate, that has been there in past. The current ROA of the bank stands at 0.9% and ROE of 11.4% and management is aiming to generate a sustainable ROE of 15% in longer term. 15% though looks easy but is a difficult one to achieve considering the near term outlook for Yes bank doesn’t look that great.

The new CEO was quite open in discussing the profitability of YES Bank. He mentioned only 30% of 1,100 odd branches of Yes Bank are profitable. And the target to achieve 80% profitability is set for 2023 – which is still a long way to go.

Shift From Corporate To Retail.

Yes bank is planning to tilt itself towards retail segment. Currently Yes Banks loan book consists of 65% of corporate and rest by retail Yes bank is planning to make it 50:50 in coming years. Move to retail would be good, it will have higher advance yield, but penetrating the market is difficult. Most of the banks have been eyeing the retail market share as they are much safer and give a better yield. Yes bank is the late entrant in the race, but its never too late. Turmoil in housing finance firms has thrown the arena wide open. Housing credit segment is up for grab. It only depends on how you play it. Yes bank believes move to retail will help in increasing its NIM by 50 bps and increasing it NII by some 10-15%.

Is It Worthwhile To Invest In Yes Bank?

Yes bank has always been a star performer, but a sudden fall out from the ivy league has left many of us wondering, whether it’s an opportunity to invest or to just give it a pass. Considering its bulging watchlist, lower growth forecast, fee reversal trends and capital adequacy problems, its better to stay away given there might be more skeletons in the closet. Yes bank faced RBI’s ire due to its stubbornness to disclose NPAs. So it has not been truthful always either.

The sheer tripling of BB and below book in just one quarter post management change raises many eyebrows. And this will continue for another couple of quarters. Along with it their will be need for provisioning, which will eat away the profitability. The growth projections are also not encouraging enough and Yes bank is also in need to raise capital if the trend continues. So its not an investment we would be thinking off right now.

If some of you  don’t give a heck and are keen on buying on Yes Bank, we have different suggestion. Yes Banks current book value is at Rs 116.2, which is trading at a price to book of 1.5 times. Which is fair enough for a private bank. A book value of Rs 116.2 puts the book size at Rs 26,900 Crs. The book value of Yes bank will come down by Rs 5,000 – 6,000 Cr in next one year owing to higher provisions. This will effectively put book value price at post one year will be at between Rs 90 – 95. Considering its growth rate in near term and its asset quality a 1.3 times book can be given. This puts the stock in the range of Rs 115 – 125. This is the range where the stock appears decently valued based on its future price to book. If it goes below that then it might start looking as an attractive investment option.