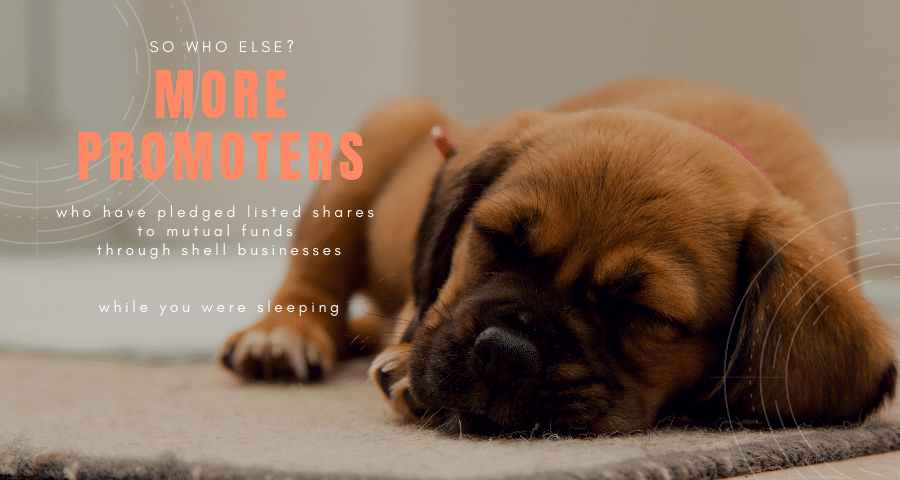 You’ve got a bunch of mutual funds that were supposed to be “debt” – meaning, they are like fixed deposits. Except, some of these funds gave money to certain companies that had no real business – but they got shares of big listed companies as collateral. Where did the money go? No one cares – because hey, they had shares as collateral.

These bonds were rated by rating agencies with a (SO) suffix. Like AA (SO). When you read that fast….ok, just read that slowly.

The recent debacle in Zee (see our video) had a mention of what happened here: an issue where such a bond defaulted and suddenly lenders found what happens if you try to sell the collateral – major damage.

SO means Structured Obligation. It’s just a way to say – look we’re giving this bond from this shady company a AA rating, but it’s backed by something else really.

What are Structured Obligations?

Corporate entities create trusts or special purpose vehicles (SPVs) to raise the money in debt markets. The debt is backed by either cash flows, corporate guarantee, securitised loan book or shares of something else. This debt will be rated by rating agencies according to the risk profile. Accordingly the coupon rate is fixed and prospective investors buy in.

What Makes Them Risky?

Not all structured obligations have enormous risk. A securitized instrument may be backed by cash flows of a thousand bonds and have protection from first loss by a lower level tranche. A bond may have a government guarantee – so if the bond issuer can’t pay, the government will. But the ones to worry about are: Those that don’t pay regular interest (only at maturity) and are backed only by shares and not by cash flow.

Typically the pledged shares value will be from 1.2 – 2.0 x of the issued debt. If the share price falls, then underlying collateral value also erodes. The entity/trust need to pledge more shares to maintain the collateral value at a similar rate.

Three things which make some of these SO’s riskier are.

As we’ve said, even a dead body can issue a zero coupon bond if you will only roll over at maturity.

No cash flows in the servicing entity, and no coupon on the bond – these are toxic combinations.

The loan will be good on the books, but the lenders are not receiving actual payments. They’re fine so far, because they have collateral of some shares. But if the bond defaults for some reason, boom: you have to sell the shares to recover the money. And the shares can crash simply because of that information.

What If the underlying share value starts falling? Then the collateral may not cover the loans, so the promoter needs to put in more shares to compensate the 1.5-2.0 X criteria. (Similarly, shares are “released” from the pledge if the shares go up beyond say 2.5x)

And finally, what if you can’t sell the collateral? You can say you have shares worth 200 when the loans is Rs. 100. But if you start to sell and the value of the shares falls 75%, you will have shares worth Rs. 50 only. You have to be careful you don’t own so much that you impact the market.

Whats the Market Exposure of such Structured Obligations in Mutual Funds?

We shortlisted six entities (Adani, Apollo, Emami, JSW, Piramal, Zee) which we feel carry some risk. Below is the table of firms which have exposure in these seven fund houses.

Adani Group has raised funds via its trusts viz. Adani Rail Infra, Adani Infra and Adani Properties. The SPVs have pledged shares of Adani group like Adani Port, Adani Enterprises and Adani Transmissions. The total market cap of all the above three firms is at Rs 1,13,500 Crs.

Adani Groups exposure to the seven fund houses stands at Rs 2,856 Crs, which is roughly 2.5% of its market cap. The maximum exposure is for Aditya Birla at Rs 1284 Crs, followed by Franklin India at Rs 1065 Crs. 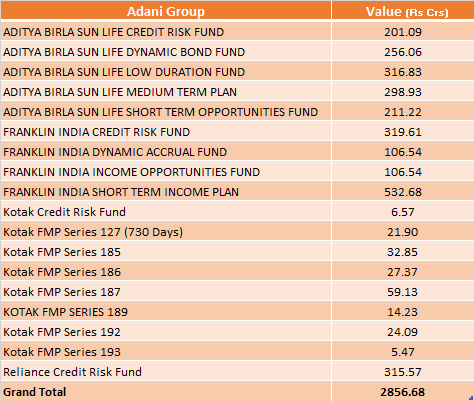 Apollo Hospital has borrowed via its SPV Indian Hospitals Corporation Ltd. Apollo hospital total exposure to seven funds is at RS 482 Crs. Apollo hospital market cap is at 15,892 Crs. The highest exposure is taken by Reliance with Rs 284.64 Crs followed by Kotak with 150.62 Crs. 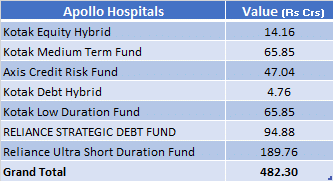 Reliance Ultra Short Duration Fund has an exposure of 4.38% of its AUM followed by Axis Credit Risk Fund at 2.86%.

This one might be under control as Emami promoters have sold shares in the flagship Emami Ltd. to help repay.

JSW Energy and JSW Steel promoters together have borrowed Rs 2,280 Crs across 4 fund houses. The two firm together have market cap of RS 78,804 Crs. The debt represents 2.89% of the market cap. The promoters have borrowed through four firms viz. JSW Techno Projects Management, Dolvi Minerals And Metals, JSW Logistics Infrastructure and Sarvoday Advisory Services. Franklin India has a maximum exposure of Rs 1355 Crs followed by Kotak at Rs 662 Crs 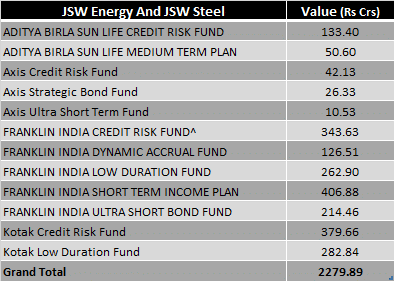 The House of Piramal 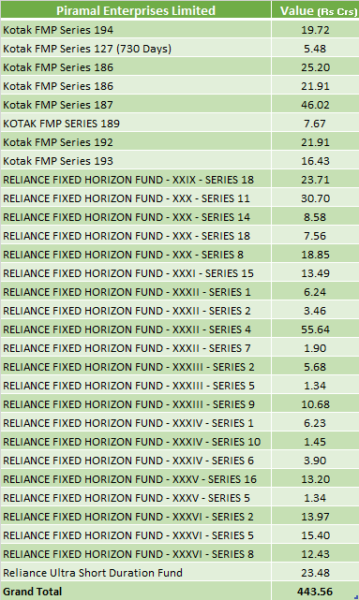 Reliance FMPs have highest exposures in terms of individual AUMs. Below is the list of funds with exposure of 10% and above its AUM 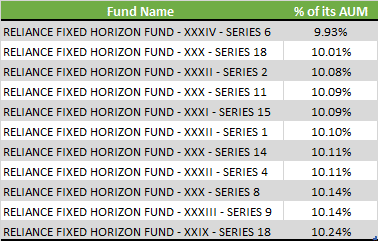 We have written a detailed note on Zee promoter pledging titled “Zee Promoter Company Borrows 2,200 Cr. , Has No Cash Flows, Negative Net Worth, Rated A+ on Shares Pledged and Franklin Templeton MF owns 800 cr. of That Debt” 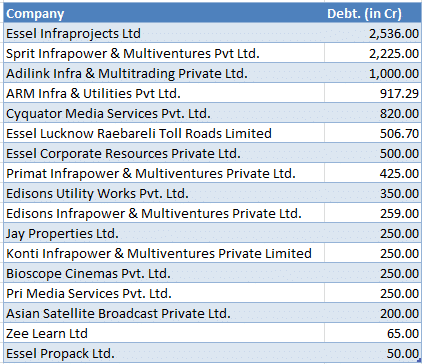 Currently, seven fund houses have exposure to 9 SPVs with a total of RS 3,965 Crs. Out of which Aditya Birla has highest exposure of Rs 1095.25 Crs followed by Franklin India at Rs 1010 Crs.

We have written a detailed note on Zee’s debt titled “The Pandora’s Box, Risk of Leverage and Zee” 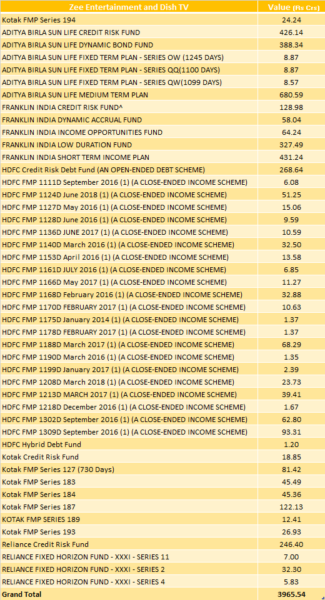 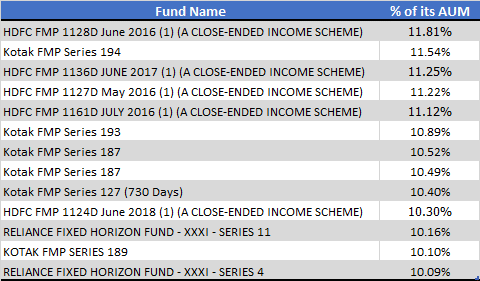 How Liquid Are The Shares, If You Have To Sell?

Liquidity is a key measure when you want to offload substantial amount of shares. In case of Zee, lenders are unable to sell underlying shares without hurting the price substantially. For instance is we consider Zee’s 11,000 Cr debtL With average daily delivery volume of 8.85 Crs, it would require a whopping 1,200 trading days to offload 11,000 Cr worth of shares. The other problem is you require that kind of persistent buying for entire selling period. Its better to find a bulk/block buyer rather than offloading it in a market.

Let’s look at the list of companies, and show you how much time it will take to sell Rs. 100 cr. worth of shares. 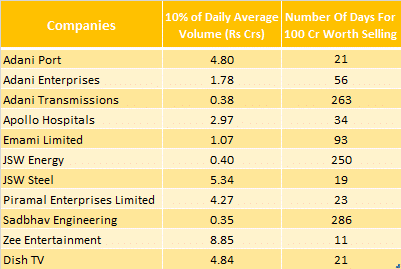 There are other entities like Apollo hospitals which has lower debt of Rs 500 Crs, which can be offloaded in a 6 months times.

But lenders are too lazy to do that in some cases, instead want to find an easier way by selling the loan at discount to ARCs. A similar case happened in 2012 between ICICI and SREI, when ICICI sold a share-secured loan to SREI.

The ICICI and SREI Saga with Kingfisher

When SREI took over the loan, USL shares where trading at Rs 800 and subsequently share price went up to Rs 2,900 by next two years in anticipation of a Diageo buyout. SREI took full advantage and sold the USL shares in market. In the process SREI recovered its 450 Cr with interest and on top of that it made an additional profit of Rs 650 Crs. It eventually put the extra profits back into the court for the rest of the lenders to divide between themselves.

Strangely, ICICI didn’t do the same thing (i.e. sell the shares) Even if ICICI had sold the underlying collateral of USL over a period of next three months rather, it could have nearly recovered most of its Rs 430 Cr. The bank chose not to take that measure and instead sold the loan to SREI at a discount.

The Current Scenario is no different. Zee promoters have defaulted on bonds. Those bonds are backed by Zee shares. Mutual funds refuse to sell the Zee shares, or even get rid of the bonds from their funds.

The End-Game: What Happens and What Should?

Firstly, why have mutual funds lent to promoter companies using zero coupon bonds, to entities with no cash flow? This practice has now stopped, perhaps abruptly, but there was no indication of where the money would be used either. They might have been used for good purposes – to build roads and such – or to simply shore up stock prices. With zero coupon bonds, rollovers, and no cash flow in teh underlying entity, mutual funds are basically lending against the value of shares – and betting that the share price won’t fall too much.

This would be okay if the fund house was doing it with its own money. Or if a hedge fund were to do it (their investors might be happy to take more risk) But to package this risk inside a mutual fund called by fancy names – that is going to end badly.

Second, why buy such SO in FMPs? In an FMP, you buy for a tenure and at the end, are paid back the money.

If the SO bond is looking for rollovers at maturity, what’s the logic in buying them in FMPs? When the FMP matures, you have to find other FMP investors to buy another FMP so that you can roll over this bond. And that is just a horrendously risky thing.

Read our article titled “The FMP Saga: What’s with Fixed Maturity Plans (FMP) Losing Money?” to get a better understanding on FMPs.

Some FMPs (like HDFC FMP 1136D JUNE 2017) have 11.25% of their AUM in a Zee promoter issued bond with an SO. Why should an FMP have SO much concentration in a zero-coupon bond that’s desperate to roll over when the FMP matures?

No one likes to question HDFC AMC. But this is a good question to ask them.

Third, what happens next?

The entities that seem to have a lot of risk are: Adani and JSW groups, with some risk in Piramal and Apollo Hospitals too.

The problem is – if these company shares start to fall, that’s another wave of madness in debt mutual funds that will hit. Again, all of them take too long.

With Zee, we have till end-September for the debt to be paid back. Meanwhile, some entities – Reliance Capital included – have dumped the collateral shares in the open market and recovered their money. If the others don’t get their act together fast, they’ll never be able to sell shares.

The best thing to do now, is for the industry to come together and create a mechanism to dispose of “collateral” shares of listed companies:

If they get together and do this now, they have hope if there is a default in other companies, in at least an orderly sale of shares. But given how chicken these funds are about even selling a few shares, this will remain a pipe dream.

What’s next, therefore, is a disorderly sale of Zee shares if there is a default. And then trouble with more such promoter share backed bonds because the market punishes anyone that’s similar. And then more disorderly sales. Hopefully, we won’t need a crisis to learn, but those are just high hopes.