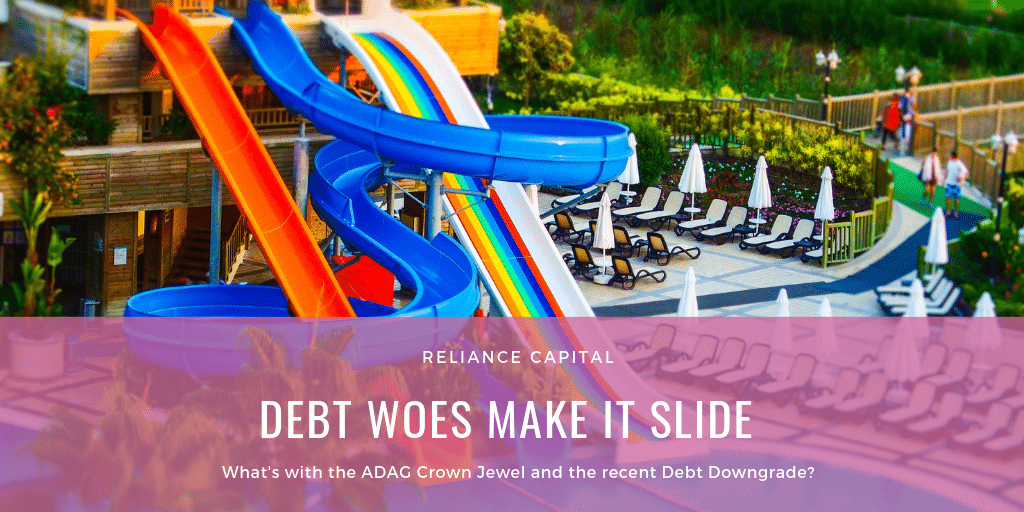 Anil Ambani has been lately in all the wrong news.  From the Rafale controversy to his Ericsson settlement, this hasn’t been a good news year for the younger Ambani. Even his elder brothers Reliance Jio could not change the fate of Anil Ambani’s Reliance Communications, with deals to transfer assets falling through. This time Anil Ambani is gasping for some liquidity to avoid a default in his crown jewel Reliance Capital.

In the last fortnight rating agencies Care and Brickworks have downgraded Reliance capital by a few notches. Rating agencies further added “RCL continues to be on credit watch with developing implications”. The rating agencies have sighted RCLs liquidity as a major concern. Reliance capital has rejected the rating rationale stating it is capable to pay off its debt. Before getting into what went wrong, we need to understand what forms Reliance Capital.

Reliance Capital And Its Core Subsidiaries

Reliance Nippon Life AMC is a asset management firm with a market capitalisation of 12,500 Crs and an AUM size of Rs 4.1 trillion which includes a mutual fund AUM of Rs 2.3 trillion at the end of Q3FY19. Quarterly revenue of RNAM stands at Rs 400 Cr with profit before tax of Rs 160 Cr for Q3FY19. Reliance Nippon AMC got listed on exchange through an IPO in mid-2017. The stake of RCL in RNAM at current juncture is at roughly Rs 5,300 Crs.

Reliance Home Finance has market capitalisation of Rs 1,400 Crs with AUM of 18,300 Crs. Reliance home finance caters to home loans, affordable housing, loan against property (LAP) and construction finance. The loan book is of size Rs 16,200 Crs and gives net interest margin of 3.5% (annualised). The PBT for Q3FY19 stood at 88 Crs and has NPAs to the tune of 0.9%. RCL stake in home finance can be valued at Rs 700 Crs

Reliance General Insurance  has a 8.2% market share, generating a gross written premium of Rs 1300 Crs for Q3FY19. RGI generates a PBT of Rs 34 Crs with an investment book of Rs 9,800 Crs.

Reliance Life Insurance started with acquistion of AMP Sanmar Life Insurance in 2005. Later Nippon formed the JV with Reliance and is still unlisted.  JV between RCL and Nippon is at 51:49 Reliance Nippon Life Insurance has a total net premium of Rs 1000 Crs in Q3FY19 with a PBT of 50 lakh.

RCL has lately been divesting its subsidiaries to meet its debt obligations. Reliance capital traditionally has been an investment company. Reliance capital used to raise debt to fund its subsidiaries. Due to continuous investments in its subsidiary’s debt levels increased substantially for RCL and during the same time other companies of ADAG (RCOM, RPOWER, RINFRA) started becoming unsustainable. This put lot of pressure on RCL to pare down its debt and bring it down to an operate able level. Post that RCL has been trying to deleverage itself but nothing substantial has been achieved yet. Timeline of divestment events is as below.

Most of the divestments happened in the past have not helped much to bring down the debt levels of Reliance capital. Reliance Capital is now going behind its bigger investments to pare down the debt on its books.

Why A Downgrade Now?

Reliance Capital has always been an holding company. Which would raise funds from its own books to facilitate investments in subsidiaries. It has an outstanding debt of 21,000 Crs. Out of which nearly Rs 2,350 Cr is maturing in next 3 months (April – 593 Crs, May – 1035 Crs and June – 718 Crs). According to rating agencies Reliance capital doesn’t have liquidity to meet its debt obligations. Its cash and bank balance stands at Rs 11 Crs as on Mar-18 2019. To add more woes Reliance Capital doesn’t have much of liquid investments left with it and has utilised committed credit lines.

Apart from the above Reliance Capital had an exposure of roughly Rs 1,500 Crs towards RCOM, which is currently in NCLT for bankruptcy. Reliance Capital in its statement has said that it has completely provisioned for its exposure in RCOM in its Dec-18 results.

Reliance Capitals have NCDs to the tune of Rs 12,000 Crs expiring between FY19 – FY28. Apart from that RCL has increased its commercial paper borrowing to Rs 950 Crs by Mar 2019, further tightening refinancing option by short term borrowing. More ever debt markets are in a risk averse zone, where in cost of raising new money has gone up substantially.

Anil Ambani owns 51% stake in Reliance Capital and had pledged 75% of the holding. Due to recent downfall in the market cap of Reliance Capital, Edelweiss and L&T Finance which held the pledged shares have sold nearly 4-5% of total company holding. This has bought the promoter holding to 47%. Following the event Anil Ambani pledged more shares to avoid liquidation. At the end of March 2019, Anil Ambani had pledged nearly 97% of his holdings. Thus closing one more option to raise money.

Reliance Capital as part of its deleveraging plan is trying to divest some 10,000 Cr of its assets to bring its debt by nearly 40% to 12,000 Crs. RCL has 14,000 CRs of investments in core business and rest is in media and entertainment business.

As part of its deleveraging strategy Reliance Capital wants to sell its complete stake in Reliance – Nippon AMC for nearly 5,000 -6,000 Crs. And another 4,000 Crs via listing of its General Insurance and Commercial Finance arms. The prime focus investments of Reliance capital is valued at Rs 1,000 Crs. The remaining stake in Codemasters business is valued at roughly 1,000 Crs, which RCL wants to divest in due course.

Reliance Capital has been in talks with various parties to sell of its stake in its subsidiaries and maintain its core business. RCL is expecting to close a deal on sale of its AMC business to Nippon by the end of June 2019, which was planned to be completed by May 2019. Its Reliance General Insurance IPO has been rescheduled from Dec-18 to June-19. Reliance Capital also expects an inflow of Rs 1,700 Crs from its sale of broadcasting business to Zee, which is long pending.

While most of the inflows are expected in June-19, cash must be generated to pay of its retiring debt in May and June (Nearly 2,300 Crs). The other option to raise debt is via securitizing, which RCL subsidiaries have been continuously doing. In a debt market like this, where most of finance companies are going in for securitization, the bargaining power of RCL will be very low.

The pertinent question to ask here is will Anil Ambani let go off his only crown jewel to default, just because he is unable to meet his short-term debt obligations even when he has enough semi liquid assets to meet his debt requirements?

If Anil gets it wrong this time, then he has very little left in terms of profit generating assets. And it’s not like Reliance Capital doesn’t have any asset to monetize at this juncture. There are assets which are more valuable as a sum of parts. The only problem is they don’t have the kind of liquidity which is required right now.

Such liquidity can be generated by Anil Ambani outside of Reliance Capital too (by selling stake in other firms). But at the current market cap of about 3,800 cr. and with debt of 20,000 cr., the Enterprise value of the Reliance Capital entity is about 24,000 cr.  The question really is: Are the investments valuable enough for Reliance Capital to be able to sell and generate money to pay back the debt holders?

In effect, the story rests on the following:

If some of these work out, the Reliance Capital issue can be sorted. However, given that other group companies are in troubled waters too, Anil Ambani won’t want to sell all these assets at a low price, and that might delay the return of capital. Anil Ambani has in the past had delays in debt servicing that have since been sorted.

The impact now is on multiple areas:

The unknowns here are many, and the answers, too few. The main thing about rescuing a company owned by a famous promoter just boils down to one thing: Does he really want to rescue it? Gone are the times when you could default and negotiate a settlement with banks – and if that option isn’t available, shouldn’t it be logical to expect that there will be no default?

Markets defy logic sometimes, so we’ll have to wait and see.