At the current juncture Pepsi Co is spread over 21 states in India apart from countries like Nepal, Sri Lanka, Zimbabwe, Zambia and Morocco. Most of the growth has come in terms of inorganic expansion by acquiring new territories and expanding the distribution network. Varun beverages has more than 51% market share in Pepsi beverages in India. The India portfolio contributes nearly 75% of the revenue.

VBL was unable to get a foothold in South Indian Market for a long time. It has recently acquired Franchisee rights from SMV group to manufacture PepsiCo beverages in 13 districts of Karnataka, 14 districts of Maharashtra and 3 districts of Madhya Pradesh. 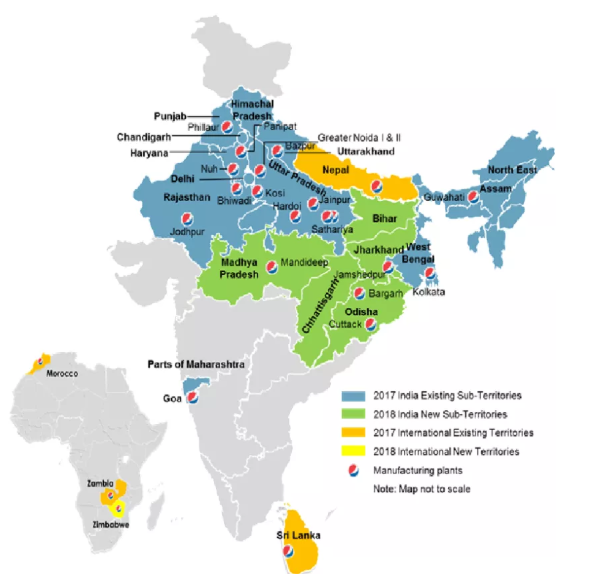 VBL has 75 depots across India with 2,100 owned vehicles and nearly 1000 primary distributors. To incentivise the retail outlets VBL has provided the visi-coolers. By end of September VBL has distributed nearly 4,74,500 coolers.

Carbonated Drinks include Pepsi, Pepsi Black, Diet Pepsi, Mountain Dew, Mirinda, 7Up, 7Up Nimbooz Soda, Slice Fizzy Drinks and Everess. VBL has manufacturing and distribution rights for all the  carbonated drinks. (The products are Pepsi owned, but Varun Beverages is a contract manufacturer and distributor)

The business is seasonal in nature and the peak is usually summer and bottom is winter, when sales dry up. The below chart reflects the same. And if we look at YoY, the volume have been growing.

Note: VBL operates its financial year starting with Jan and ending with December.

Most of the revenue growth achieved is in by means of inorganic expansion. VBL has continuously added new territories (domestic and international) and simultaneously built capacity around it, rather than just eyeing distribution. 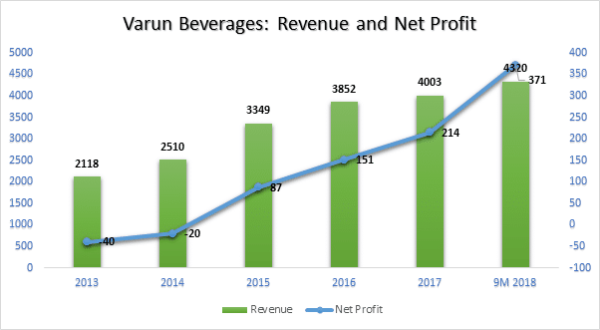 The same has been reflecting in its revenue. Revenue has roughly grown at 16% CAGR and profit by astounding 48% CAGR over the last six years.

And even now, most of the areas under which VBL is operational, has not been completely saturated (in terms of penetrtion). Also still it has South India to cover, where it doesn’t have any presence.

Manufacturing and distribution of beverages has been a high margin business for VBL. The current EBITDA margins are at the level of 22%. Most of the margins come due to in house manufacturing and strategic locations of plants across India.

If we can see the margins in 2013, it was at 13.70%. Post that VBL has acquired new territories and added new manufacturing plants. The backward integration has bought more margins in logistics and manufacturing.

Inorganic Growth Comes At A Cost

All the acquisitions of territories and plants VBL has done is through debt. This has spiked up the debt levels of VBL. VBL started with debt of Rs 1,940 Crs and at its peak of expansion it had a debt of Rs 2,654 Crs.

Despite this, their cash flows seem strong enough to be able to repay this very fast. 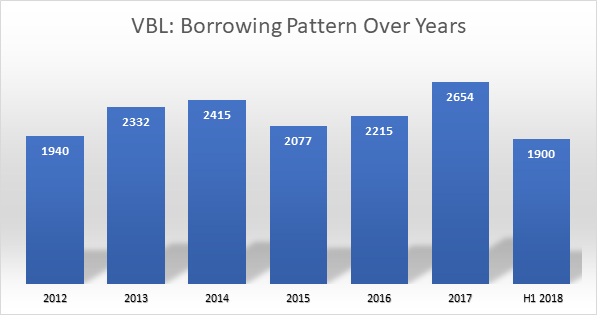 Post 2017, debt levels has come down as most of the capex done in previous years have started generating cashflows. And they did not do any new capex in 2018. Currently it pays roughly 4% of its revenue towards finance costs.

Their Debt to Equity is 1:1, but out of about 980 cr. of operational EBIDTA, they pay about 211 cr. towards interest – an interest coverage ratio of 4x.

VBL has very recently acquired manufacturing and distribution rights in Karnataka and Maharashtra. Both are comparatively big states, which till now were out of bounds for VBL. This will add a significant growth to its top line. And still it has some states like Tamil Nadu, Kerala, Andhra Pradesh, Telangana and Gujarat to cover. These are regions which see higher temperatures in summer and have higher demand during the period.

Apart from Indian sub-continent, VBL has got a foothold in Africa. a high growth market. Zambia has seen a growth 35% in last one year. Any new territories added over their will be an added advantage.

Improving The Revenue and Margins In Existing Territories

Also with in house manufacturing of Tropicana, the margins will improve significantly. Till now Tropicana has been dragging the consolidated margins. (Tropicana drags down margins by 3%, since they don’t make the product)

PepsiCo has evolved with time. As the generation changes so is their drinking habits. Consumers are going towards lower calorie drinks. In line with that Pepsi has launched diet Pepsi, Pepsi Black and Sting. The recently launched products contribute nearly 2-3% of VBLs revenue. More new products offerings are required to drive the future growth.

Sugar and Crude has been the major cost factor involved in manufacturing. Most of the beverages have sugar content in it (except diet Pepsi). Any increase in sugar prices directly hits margins. Crude prices are important as most of the packaging materials are derivatives of crude. Rise in crude prices will adverse effects on VBL. According to management, any increase in input cost up to 5% is borne by the firm. Anything above that is directly passed on to customers.

Fad of Carbonated Drinks is Waning Away

Globally, most of the developed countries are shunning beverages with high calories. And consumers are moving towards more healthy drinks rather than carbonated drinks. This trend has left beverage giants like Pepsi and Coca Cola in search of newer emerging markets like Africa, South Asia etc. . India too has placed higher taxes on sugared drinks. Smaller countries like Sri Lanka have shunned high sugar drinks

VBL is facing degrowth in the by almost 20% this year, in Sri Lanka.

The same trend has been catching up the upper urban consumers in India. This might at some stage reach a tipping point and start spiralling down. New products with changing times will keep the beverage industry going forward.

Promoters hold 73.56 % stake in VBL. FPIs hold another 13.03% stake. Mutual Fund like Reliance Growth Fund, Sundaram Value Fund and Tata Large and Midcap Fund together hold another 5.72%. Corporate bodies in Singapore own 3.73% and the tiny 3.96% is controlled by retail investors. 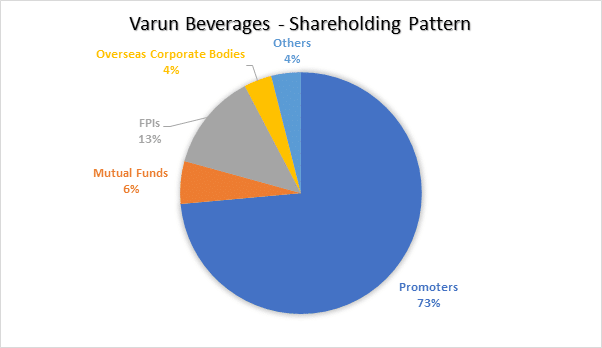 Note: We just provide a context for various stocks look at fundamentals and their price charts, in the Outlier in Focus articles.