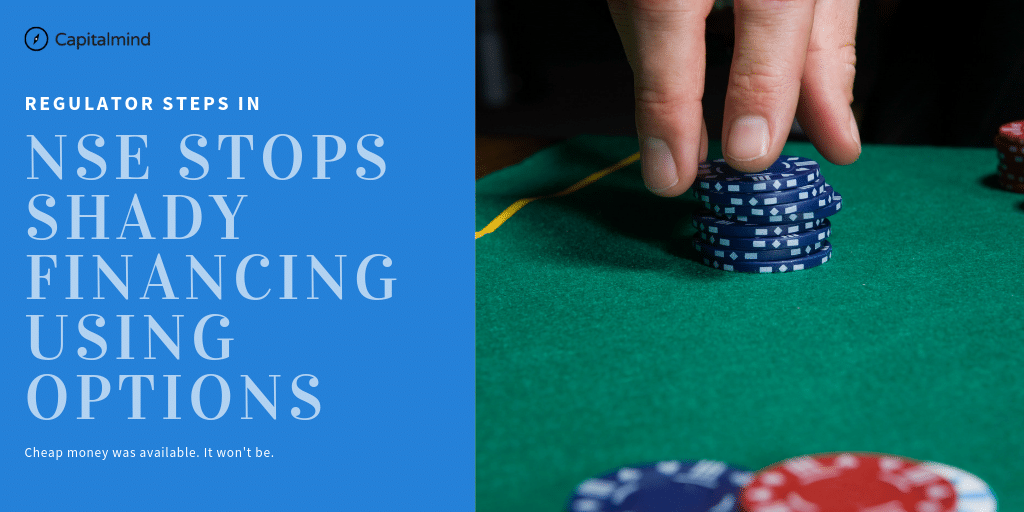 A new circular from NSE changes the financing game for people who’ve been using the options market for financing deals. The NSE will require cash to be posted (instead of stocks or other instruments) as margin against call options shorted by participants in the longer term options markets.

That sounds complicated. So we’ll simplify.

What was this financing scheme?

Let’s say there’s a lender and a borrower. Typically one would give money to the other, and the other would return it with interest. But for many reasons, they choose to do it through a stock exchange instead.

Well, there are ways to hedge. You could buy futures. Or you could write a Deep In The Money Put option to compensate (the put will lose money if the market rises, while the call option will rise)

But Doesn’t The Exchange Require Margins?

When you write options, the exchange wants a margin. The margin might actually be higher the Rs. 8,600 premium earned in the process. So how is this useful if you get the premium but have to place it at the exchange as margin?

What really happens, is that margins can be paid in cash, but also by giving securities as collateral. You could even give a fixed deposit instead of cash, or  you can give shares with a haircut of 50% or such.

If you have shares you don’t really want to sell, you just give them as collateral instead. And use the premium for other things – you’re getting a loan, against your securities, at 5.6%. Excellent, you might think!

And this was happening big time.

In comparison, the highest open interest in calls in the March Expiry – just a month away – is only 8 lakh shares (11,000 call option)

There’s a similarly crazy situation in December 2019 calls, and many other options as well.

NSE’s Circular Cuts Down On This Financial Scheme

The main reason this financing scheme exists is:

The whole thing hinges on: I can provide securities as margin.

What NSE has said in a circular is: This changes the game.

You can’t do the deep in the money options using securities as margin any more, after 29 March.

Meaning, you have to put the margin in cash. There’s no point of that because if you put margin in cash you can’t use it, so the financing scheme will die.

But this only hurts people who’ve SOLD deep in the money (or deep out of the money) option contracts on the exchange that’s over 40% away from current prices. For nearer term maturities, the limits are 20%.

We believe the impact will be from now to March. It is mainly on contracts that need to be unwound, and the cash returned. 14 lakh Nifty exposure is about 1,500 cr. which is not a small sum, and that’s just the 5000 call for June 2019.

The question really is: where is the money used? Most of the open interest in the June 5000 call was built in December 2018. We believe much of this could simply have been used by brokers for either margin financing, or for on-lending for other purposes. This will have to be reversed.

There’s no impact to buyers as of now. However, we expect that because there is now very little incentive to sell such options, buyers may have no liquidity.

It’s a good thing that NSE stopped this act. Because such financing schemes can lead, very easily, to a situation where a settlement crisis can occur. We have seen such financing schemes in NSEL (where the situation was much worse because the borrowers were frauds, and possibly the exchange as well) and it is better to stop them when they are relatively small. (Read about that)

At the same time, there are people who “depend” on such financing schemes and rollovers, and they will be in trouble. If they are company “operators” – some of whom are known to use such schemes to finance themselves – we’ll see volatility in those company share prices. But otherwise, the impact may be limited.