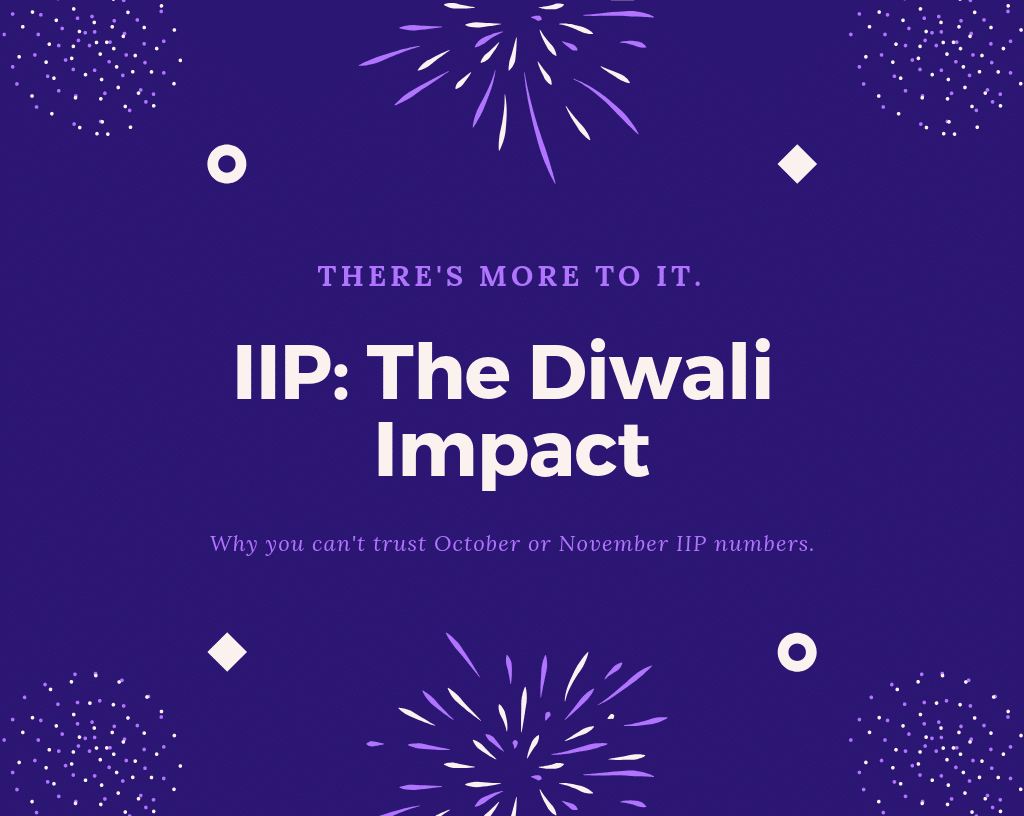 We know there’s something called the Index of Industrial Production (IIP). This collects data of actual production (not prices) of various things – from electrical equipment to furniture to food products. Since it’s production and not prices, people look at it as an indicator of industrial “real” growth – the idea is how much more have we produced versus looking at the cost at which they are sold.

The IIP has many flaws. One of them is the seasonality – you can’t do a month on month calculation because production changes every quarter of the year naturally. So we compare things year on year.

The big issue is the Diwali Effect of IIP. Diwali is a big thing in India – and often factories are shut and despatches cut for a significant period around the festival. This results in production being cut often. We can see this in the raw IIP numbers. (Capitalmind has taken data back to 2005 by merging two “series” of IIP, because the current round only contains data from 2012)

Apart from some exceptions, most Diwali months are lower than the trend, and the year on year numbers look lower.

In the US, the holiday is Christmas which always lies in December. But with the lunar cycle, the month in which Diwali falls can be different each year – either October or November. Diwali is the biggest festival in India, and many factories shut down for a few days before (and after) the day.

This means October should look good (8.4%, which it did), since in the previous year Diwali was in October, and was seeing suppressed IIP growth.

November 2018 was the Diwali month. But November 2017 was not. So obviously growth will be a little stunted in November.

So How Would You Look At It?

Simply average the two – October and November. The impact should be clean then.

As you can see, it’s much cleaner this way.

There are lots of headlines getting excited about higher IIP on October or very low IIP in November. Sometimes they ignore the core data and the Diwali impact.

Note: A growth of 4.4% averaged for Oct+Nov 2018 isn’t that great, but it’s not as bad as the headline number of 0.5% either. Also, people will use this note to indicate political affiliations, saying “Oh this guy is a fan of the goverment”. Given that we get enough on the other side (“They hate the government!”), we choose to average all these comments and thus remain on the side of equal opportunity critics of all governments and parties.

Note 2: IIP is often not very useful as an indicator of anything, because India is more a service led economy rather than one of manufacturing. With all sorts of changes in methodology, the impact of IIP sometimes isn’t quite there on the GDP (Manufacturing) numbers either. But as numbers go, we just make do with what we get.