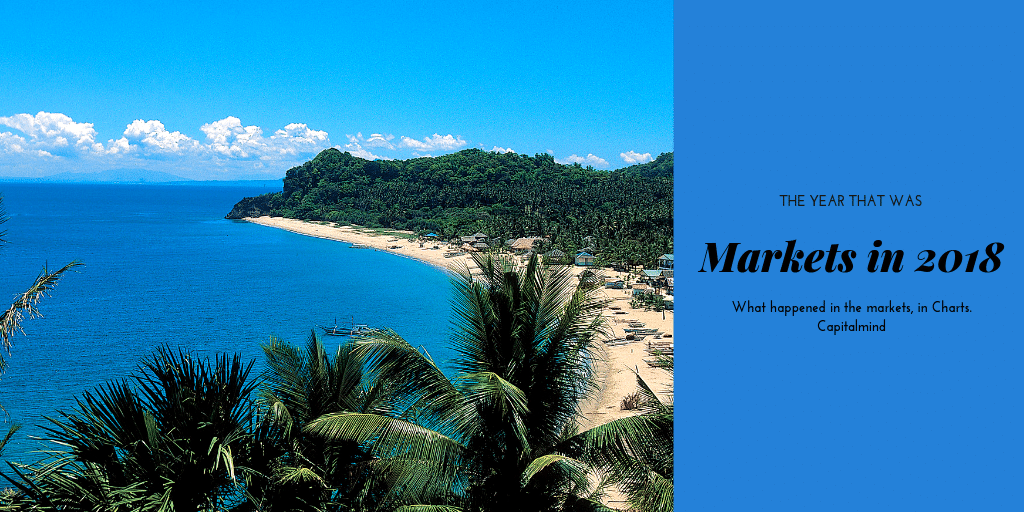 We started 2018 with a Bang and ended with a whimper. What a difference a year can make in the life of an equity investor.  2017 was a year when the ruling party, BJP could do no wrong as it wrested state after state in the assembly elections from the opposition. It was a year when the Goods and ServiceTax (GST) was formally launched and one that promised to herald a great new era for Indian Business.

Investors cheered the news with strong flows into Equity which ramped up the markets with Indices such as the Nifty Small Cap registering its strongest gains since2009. Strong inflows by Retail Investors meant that the party was just starting or were they in hindsight, just ending?

Purely looking at the chart of the mainline indices, it would be tough to understand the distress of investors. Nifty 50 closed for the 3rd straight year of gains – yes, the gains were more in line with a time based correction but that is better any day than a price based correction, Right?

The breadth of the market though told quite another story – a story of defeat and drudgery. The same small cap indices which were the toast of the party in 2017 became the main provocateur with it closing the year with losses of the magnitude it hasn’t seen since 2011.

While the index did not even wipe out the gains of 2017 let alone of earlier years, the straight line fall we saw in many stock seemed to indicate that the reality was worse than what even the index could showcase.

In this post, we shall look at the markets in a different way –

We started the year with greater than 70% of stocks that trade on the National Stock Exchange trading in their bullish zone. The definition for considering a stock as bullish is when it’s trading above its 200 day exponential moving average. We ended the year at 25%, the lowest yearly close since 2011. 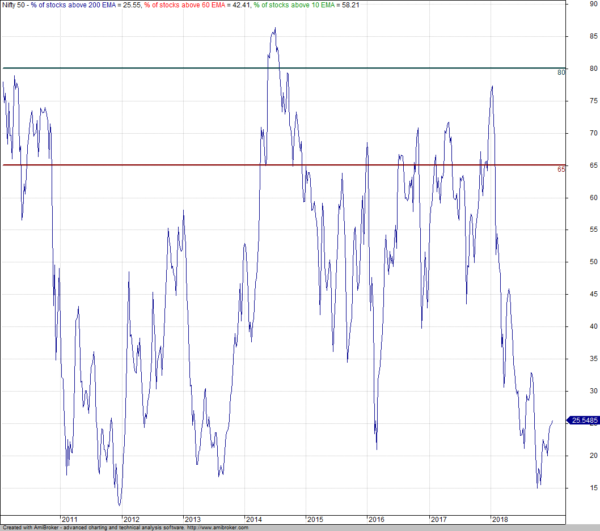 At last count, the National Stock Exchange of India has 13 broad market indices, 15 strategy indices, 20 thematic Indices and 11 sector indices for tracking the equity markets. But unfortunately not everyone has as detailed a history as Nifty 50 which goes back to 1990.

The best index for 2018 was Nifty IT Index which gained 23% year on year while the worst performer was Nifty Reality which lost 33% during the course of the year. But this single point of information is not useful to either understand the trends.

Instead, we have come up with a table of the rank (Best to Worst) from 2008 to 2018 to showcase the ever changing trends when it comes to sector returns. As you can see in the table below (it’s a large picture, please click on it to enlarge, no sector index or even broader index has been on the top for even two consecutive years.  The only index to be the number one for 2 consecutive years is the Momentum Index, Nifty Alpha 50. What does this tell about 2019? If anything it’s that the view of generating a decent return by investing in this year’s best performing sector / theme can be highly misplaced. Charlie Bilello of Pension Partners coined the term called “Rearview Mirror Gap” which is the differential investors pay (since its lower) when they buy stocks based on backward looking data (earnings or price). The winner of 2017, Nifty Realty Index was the worst performer in 2018. 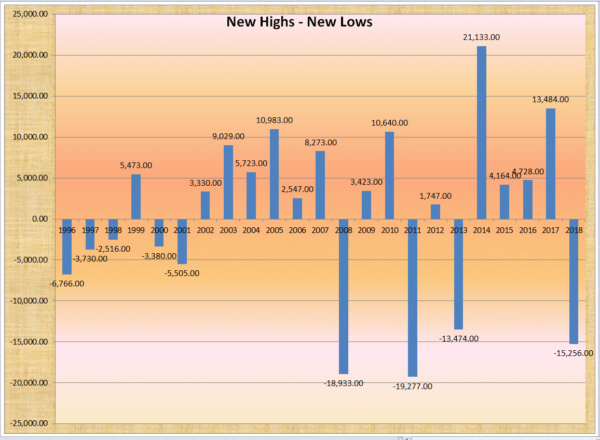 FII’s have remained sellers for the fourth consecutive year while in the same time frame, Domestic Institutions on the other hand have invested double the FII outflow. 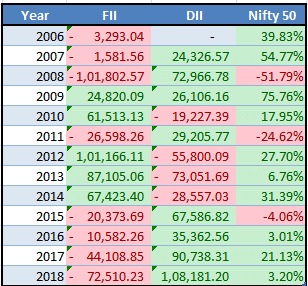 Mutual Fund Sahi Hai campaign rolled through the year and has ensured that flow of money into mutual funds did not dampen even if the sentiments went down. Data for December 2018 is not yet out, the net inflow for equity funds for the year excluding December 2018 came to 1.06 Lakh Crores. While this is slightly lower than what Mutual Funds raised in 2017, it’s still a great positive for years such as these are ones where outflow is greater than the inflow. See how the Bars have changed post 2014. Is this the new normal? 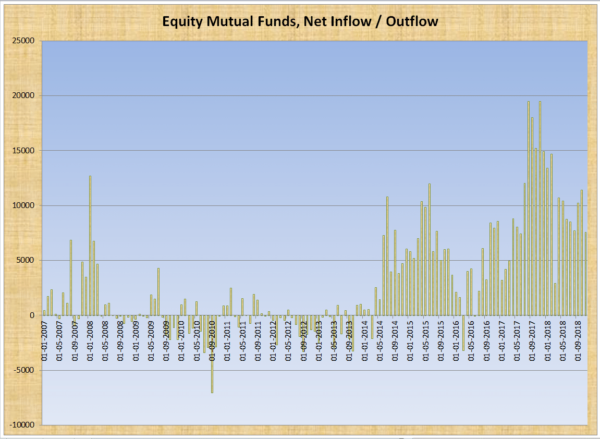 When measured in Dollar Terms, our mainline indices closed slightly negative. S&P BSE Dollex 30 for example closed with a loss of 2.7%. Charlie Bilello posted this picture of country ETF returns. Since this normalizes for currency, measuring everything in US Dollar, this is a good way to understand the fate of the markets across the world.

India actually ended up fairly good on the ladder though if you were to look at BRIC countries, only China had a lousier year. 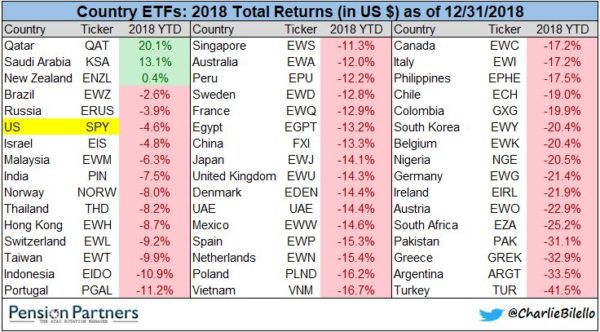 We started this year with a lot of hype around Bitcoin with CFE launching the first Bitcoin futures in December 2017. Rather than this being the start of a new bullish trend, the train stopped and reversed in a dramatic fashion. At the end of the year, Bitcoin was down 81% from its peak.

Introduction of Futures gave traders for the first time the ability to short Bitcoin and once Demand and Supply on an open exchange came into the picture, the bubble was more or less bust. Of course, as the chart shows, something being down 80% doesn’t really mean the death of the product or what as the saying goes, what can go 90% down can easily go down another 90%. 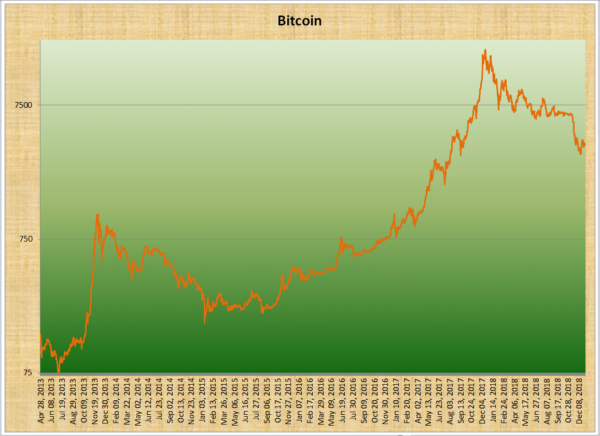 On a Price to Earnings ratio, Nifty is still as pricey as it was at the end of 2017. Not surprising since Nifty 50 itself actually closed a bit higher. What this actually seems to suggest is the long awaited earnings cycle is yet to come. 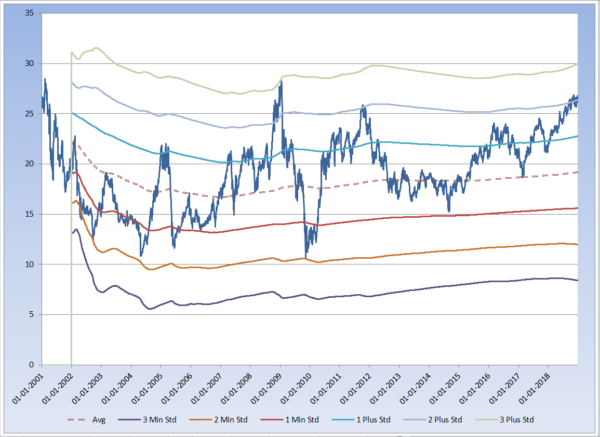 All in all, 2018 turned out to be a different from what most expected it at the start of the year. As a saying goes, When the consensus of the majority of investors strongly bullish, the astute trader is ready to short the market. We entered 2018 on the back of an incredible performance in 2017 and just going by that number, the final number doesn’t really seem so bad.

The first 5 months of 2019 will be a hugely different animal now that the 2019 is all open. While the overall trend of the economy should sustain regardless of the changes, the volatility it shall bring upon will have a huge bearing on how investors position themselves for the future. If you look at the performance of the markets going into elections, it is generally subdued. Only 2014 in that sense stands out for the market seemed to genuinely believe that Modi will come to power and bid it up. Given the swing against the BJP we saw in the recently concluded state elections, markets have follow its older pattern of no major moves on either side till the elections come to a end.