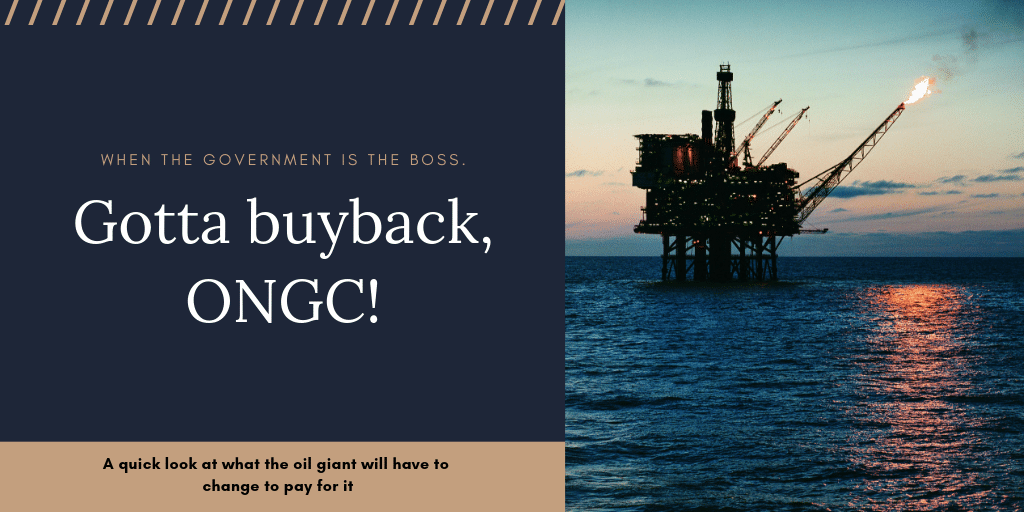 We have some big big numbers here.

This is, in fact, the summary of the borrowings of ONGC during FY17-18. In Fy16-17 they had no borrowings. In fact, during the previous several years they had zero borrowings. This is a cash rich company because that’s what a big oil company is.

But now, they not only have slimmed their coffers but also picked up loans, like people pick up vegetables during a discount rush. And all that because of some ill-considered decisions taken by our present central government regarding this PSU company.

The reason ONGC took on debt was for purchasing HPCL from the government. The government owns both ONGC and HPCL, but it needed money, so it forced ONGC to buy it’s ownership of HPCL. For a whopping Rs. 36,000 cr. For which ONGC borrowed about Rs. 24,000 cr.

But ONGC is hugely cash-flow positive, and in the first six months after this report, ONGC has reduced it’s debt to just Rs. 14,000 cr.

The reason for pointing this sticky situation out is that the central government recently directed cash rich PSU companies that have a lot of idle capital, to utilize it by handing out dividends and carrying out buybacks. Why? Because they need to meet their Rs. 80,000 crore divestment target.

That means that even ONGC (even after buying HPCL) has to roll out dividends and buybacks. However, considering its current position, ONGC says can either do a buyback or pay dividends, or better, neither, until the next financial year.

While they are still pleading the Ministry of Finance to exempt dividend, unfortunately, due to pressures from the government, they have agreed to carry out the buyback. The buyback is for 2.34% of its shareholders’ capital, which comes to Rs. 4,022 crore. The record date set for both is January 4, 2019.

Now the question is, how is ONGC going to pull this off? Answer: it can’t… and doesn’t have the cash anymore. Not unless ONGC picks up more loans, or reduces its efforts to pay back the loans it currently has.

Can ONGC Get Cash Elsewhere?

First, they can look at the profits that would be generated in Q3 & Q4. They generate a cash profit of over Rs.5,000 crore almost each quarter.

Secondly, ONGC holds around 134 crore shares in IOC and IOC recently declared dividends and buyback. If you look at only the dividend aspect, IOC will pay Rs. 6.75 per share. For ONGC that means around Rs. 903 crore. Then there’s the buyback as well.

So, they get about Rs. 1700 cr. from the dividends/buybacks of their holdings. That provides them with about 40% of what they need for the buyback, and the rest (of the Rs. 4,022 cr.) will have to be sequestered from their profits of the two quarters.

Their goal of being debt free may have to wait. They were supposed to pay back the entire loan they took to buy HPCL, within a year. But that may extend another six months, if it has to do this buyback and pay a dividend.

All in all, ONGC seems to be in a tough (but not impossible) situation. They generate enough cash to be able to pull it off.

The problem, however, is that the government as the primary shareholder gets in the way of efficient functioning. We could analyze this and say ONGC has the money for now, but what if the greedy government keeps wanting more? As a shareholder, this might not be exciting.

It also tells you the perils of investing in a government owned company, but at least they siphon off the money after telling you about it. In most other companies, you don’t even get to know about how much money’s been looted.