Kotak Bank, known as one of the finest private banks in India, has knocked the doors of the courts against its own regulator, the Reserve Bank of India. We examine the complications and implications – essentially the answer to the question: What is this Kotak’s Natak?
Kotak Bank which was built by Uday Kotak was asked by RBI to pare down its promoter stake way back in 2012. THis is normal, as part of RBI norms, to “broadbase” the shareholding and to restrict individuals from holding large stakes in it. While the bank has been following the stipulated timeline since then and accordingly bringing down its promoter stake holding, but recently it was dinged by RBI for not following the proper method of dilution.
Let’s take a look.

Why Does Promoter Stake Need To Be Diluted?

RBI has been very particular in promoter holding for private banks. RBI has been of the view that private banks need to have diversified set of shareholders rather than having one or a few individuals with voting rights. This in turn will make private banks more institutionalised and will improve the compliance and governance of the banks. (Or so they think)
Banks take public deposits. This has a systemic impact too, as a banking decision can hurt not just the bank’s shareholders but also the banking system.
In line with that ideology, RBI has required promoters of private banks to cut down their shareholding to 15% of the capital within about 12-15 years of their approval.
When the initial guideline was issued to Kotak Bank, maximum promoter holding was set at 10%. In the later panel meeting in 2014, it was decided that 15% would be a optimal mark. Other private banks like HDFC and Axis have institutional promoters, where as ICICI bank has no promoter holding.

The Rules and the Capital Structure

According to the RBI deadline, Kotak had to reduce promoter shareholding from 30% in June-17 to 20% by end of Dec-18. While there are various ways of diluting the stake, Kotak went for a road less travelled and got on the wrong side of the path (according to RBI).
The RBI rule said Kotak had to reduce his stake as a percentage of “Paid up capital”.
Paid up capital can consist of equity shares, or preference shares. Both are equity but preference shares can be non-voting, non-convertible instruments. Meaning, you get a dividend, but you don’t get anything else.
Kotak bank has had, till recently, only 190 cr. equity shares of Rs. 5 “face value” – a paid up capital of Rs. 952 cr. Of this, Uday Kotak and the promoters collectively own about 30%.
Recently, Kotak Bank issued Non Convertible Perpetual Non Cumulative Preference Shares worth Rs. 500 Cr at RS 5 a piece.
That will effectively increase the “paid up capital” to Rs. 1,452 cr, with 952 cr. as equity capital and 500 cr. as preference capital. Thus according to Kotak Bank will bring down promoter holding from 30% to 19.7%.
But this is a loophole, really.

Non Convertible perpetual shares just get some dividends, but have no voting rights and can’t be converted to shares.
Kotak has around 200 cr. outstanding equity shares and promoter is holding 60 cr. shares. Now 100 cr. more PNCP shares are issued at a face value of Rs 5 and a fixed dividend of 8.1%.
From the net profit after tax, company needs to set aside 8.1% of Rs 500 Cr as dividend for PNCP share holders, or around 40 cr. per year. The rest can be given to to general shareholder. As the shares are non cumulative, it means if in one year, the firm faces losses then that year’s dividends is not carried over. So:

While this sounds good for everyone, what’s RBI’s problem?
Obviously the above situation still means Kotak has 30% control over the company, in some way. This is not really dilution, which is what RBI argues. In fact it has plugged this loophole for banks like Bandhan bank, where RBI rules say dilution is a percentage of “paid-up equity capital”.
For Kotak the rule was “paid-up capital”. This mechanism is just about using the loophole instead.
RBI has said NO WAY. But they’ve not been transparent about why, and therefore, Kotak has gone to court because the deadline of December 31, 2018 is just a few weeks away.

What did Kotak Bank Do Earlier For Stake Dilution?

Kotak has tried various measures to bring down the promoter holding to RBI prescribed limit. From selling promoter shares to acquiring a new bank. Below is the timeline of events and how Kotak has managed to dilute its stake form 45% in 2012 to 30% in 2017. 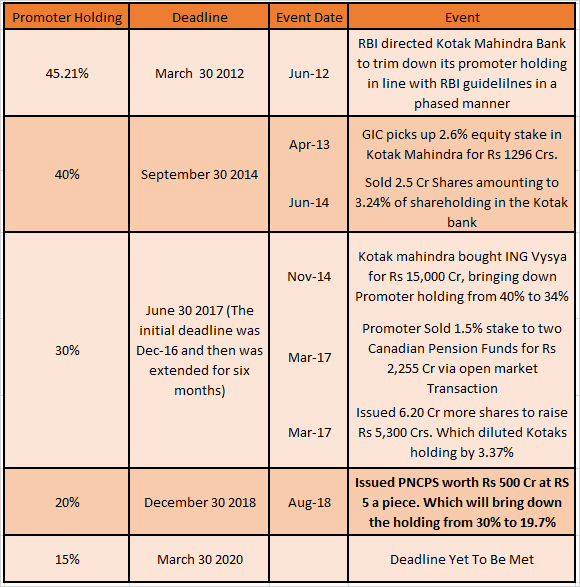 The prominent among them was the buyout of ING Vysya in 2014. Kotak Bank bought Ing Vysya for Rs 15,000 Crs at a 16% premium. This in turn brought the promoter stake of Kotak down from 40% to 34%. The target was to bring down holding to below 30% by December 2016.
Among other measures was a promoter stake sell out, which it did to GIC and issuing new shares. With all these combined measures, promoters were able to bring the stake down from 45% to 30% in a span of five years.

What Else Can Kotak Do?

To Issue New Shares.
For Kotak to bring down his stake to 20% without selling his shares, the company had to issue 50% more share than its outstanding shares.
At the current price of Rs. 1200 per share, they’d have to issue 100 cr. more equity shares. This requires over 120,000 cr. – that kind of money has never been raised in a single tranche, and also, if you did that you would destroy the profitability of Kotak as a % of capital (they can’t use that much capital) Put another way, this is about 20% of all banking capital put together.
To Buy Out Another Bank.
This idea seems a feasible one, but the only problem is that the other another bank is of half of Kotak’s market cap for acquisition. This method was tried earlier once, when Kotak acquired ING Vysya. The other options in the market are Axis and ICICI Bank, with a market cap close enough to consider.
It’s unlikely that these banks will want to get acquired, and even then, imagine the time and process involved – there’s no way to do this even within a couple years.
Stake Sale By Promoter.
Stake Sale by promoter is the most apt option – a 10% stake sale by Kotak means a value of roughly Rs 23,000 Cr, which will go to Uday Kotak. Now, 23,000 Crs can be found, perhaps.
However, Uday Kotak will then have to do something with that money – and should shareholders want him to think of creating other businesses? Already, the situation in Yes bank is murky because the promoter family has their own private lending businesses. Would we want this kind of thing to go further with Kotak?

We don’t know how the court process will turn out. Going against your regulator is not considered good form, but things at the regulator have changed as well, with a new governor in place.
Initially, there is likely to be a stay on RBI’s order on Kotak, until matters are heard. If it goes to a verdict, and in favour of Kotak Bank, then the respect RBI commended as a regulatory body gets diluted. It might be that the regulatory body will be dragged to court more often, for the decisions it takes against the banks. Apart from that, the other banks which are also been given notices for promoter stake dilution (Bandhan Bank, DCB) will want less stringent action.
In case the court gives verdict in favour of RBI, then things will get more difficult for Kotak going forward.

Our View: Loophole used, but the rules need to be fixed

If RBI’s view is to curtail voting rights, it can do that regardless of shareholding. Anyhow, promoter voting rights are capped at 26%, and RBI can easily reduce that further. (They, in fact, raised it from 15% a few years ago)
If voting rights are anyhow capped, then why should Kotak dilute stake? The answer, people tell us, is that you have to follow rules. Then yes, he’s following rules, because the rule talked about paid-up capital, which has been diluted.
Let’s not argue about the “spirit” of the rule. The “spirit” is already being satisfied by limiting Uday Kotak’s voting rights. And it makes no sense that HDFC Bank has 25% promoter shareholding and RBI is okay with them. So if you really want spirit of rules, let’s apply them to everyone consistently.
In all, the new RBI governor needs to take a lenient view and create a less restrictive process for dilution of stake in banks. Keeping stakes below 50% and voting rights capped at 20% should solve their objective. But Kotak’s step of issuing shares without first checking with RBI, and then going to court, is a little reckless as well. Business will go on as usual until there’s an amicable resolution – and in this case, it seems like RBI will not want to appear as if they are bending to Kotak, so:

In India, more time is spent fighting on silly issues than on doing things better. Perhaps, in that light, the Kotak bank situation is par for the course.