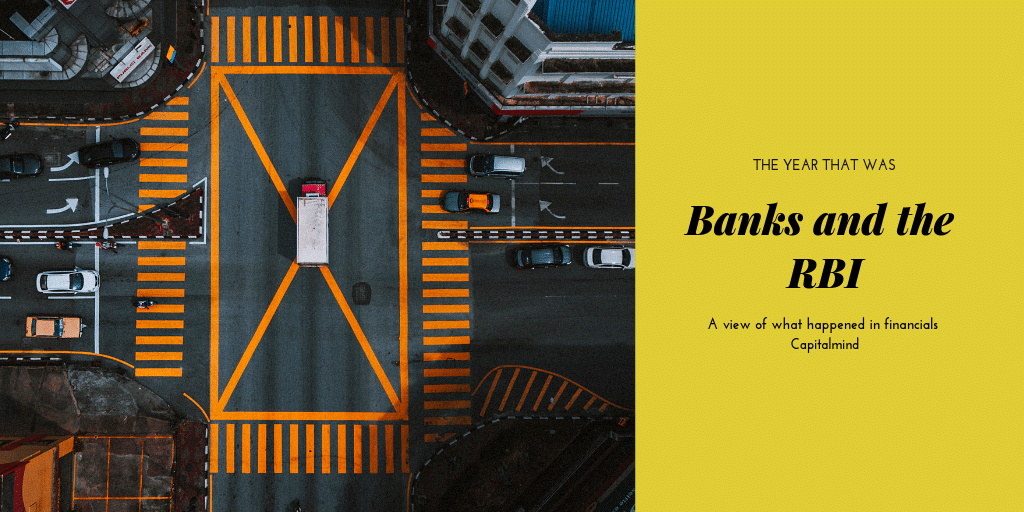 The year 2018 is coming to a close and we at Capitalmind will be trying to cover the most important aspects of it through a series of posts. We start off with this post on Banking & Financial Services.

2018 has been a year of big news when it comes to the area of Financial Institutions such as Banks and Non Banking Finance Companies.  Starting from the massive bank recapitalization, Nirav Modi scam to bank mergers and RBI vs Yes Bank and Kotak bank tussle, we seem to have seen it all.
This post is a roundup of the major events that unfurled during the year and the posts we wrote during those times.

Government of India announced The Great Indian Bank Recapitalization in October 2017. The governmetn committed itself to infusing fresh capital to the tune of Rs 2.11 lakh Crores. This was prompted by banks which were reeling under NPA and were coming up short when it came to meeting their capital adequacy and provisioning targets.
The large amount of Non Performing Assets also meant that they were unable to lend freely.  As part of the first installment, government issued recap bonds worth Rs 88,000 Cr in January 2018.
To read more about what recap bonds and how is it going to solve the banks capital problem read the below article titled.
The Banks That Get 88,000 Cr. as a Bailout. Explained 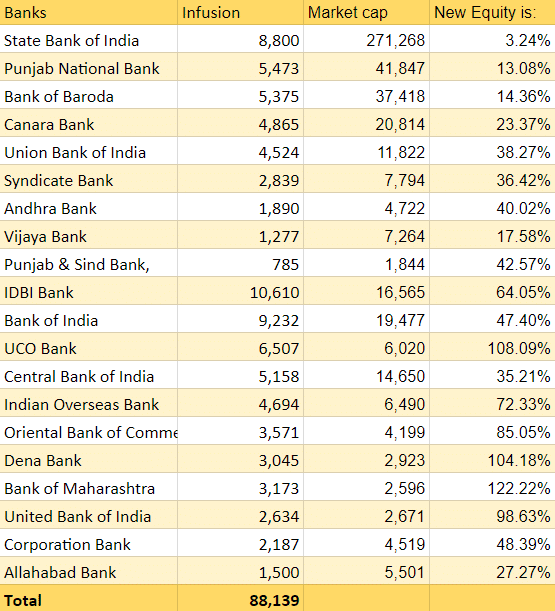 RBI Asks All Banks To Link Base Rates To MCLR.

MCLR has been implemented since April 2016 and most of the new loans have moved to MCLR. Still 30% of loans were linked to base rate. RBI stepped in and asked all banks to mandatory link its base rate loans to MCLR. MCLR rates were slightly lesser than base rate. This will have slightly higher impact on banks who have higher number of loans attached to base rate and the difference between base rate and MCLR is very high.
At the end of year, RBI monetary policy hinted at banks moving to complete new regime by linking all personal loans to external benchmarks like RBI rates, Gsecs etc.
We covered the impact of banks linking their base rate to MCLR here,
RBI Forces Base Rates To MCLR, and How This Will Hurt Banks

When all seemed going well for Punjab National Bank, one suddenly woke up to a massive 11,400 Cr scam. While the scam itself was shocking as it missed so many checkpoints, its sheer size left everyone bewildered. Since this was a fraud rather than a NPA, Banks generally write it off in one shot. The size of his fraud though meant that they had to ask RBI to allow them to spread it across four quarters.
We covered the same in his long read and one which went viral.
How The 11,400 cr. Import Ponzi Scam at PNB Unfolded

One of the cribbing point for FPIs have always been the government’s policy to make FPIs to hold government debt securities for at least three years. Longer tenure opens up Risk since much of the money is from investors who may require redeem well before the three year time line has passed.
RBI took note of the same and bought out a mechanism to make investment in debt securities more attractive. RBI has announced going forward FPIs can hold government debt securities for at least 1 year. Further more limits for FPI in debt investment has also been revised. The revised limits are as per the table below.

The Banking Sector Report For FY18.

One of our premium post was a deep report we wrote covering 35 banks across Public and Private Sector. This post analyzed the differences across banks when it came to Deposts, Advances, Non Performing Assets, Advance and Deposit growth among other factors. We also covered divergences between the Bank’s NPA and RBI with Yes bank being the one with maximum NPA divergence.
To read more about banking sector report, read the below article titled.
Banking Sector of FY 2018

The year saw 9 states go for elections out of which 7 states have announced loan waivers for farmers totalling Rs 1,72,000 Cr.  It might prove to be a big burden for state coffers but it was a much needed tool for political parties to try and capture power.
If we see the impact on banking side, its kind of slightly on positive side. We can assume that almost all the cash will come back into banking system, which is not a bad thing for banks. They will be clearing their farm loan NPAs and can start a fresh. The only problem area being most of state governments have put a cap on loan size. Banks will add a little more NPA for loan size higher than government prescribed limit. Advantages of loan waiver are more in favour of banks than drawbacks associated with it.
To read more about how this loan waiver will fuel up some stocks read the below article titled.
A Set of Stocks That Are Likely To Benefit From A Growing Rural Economy 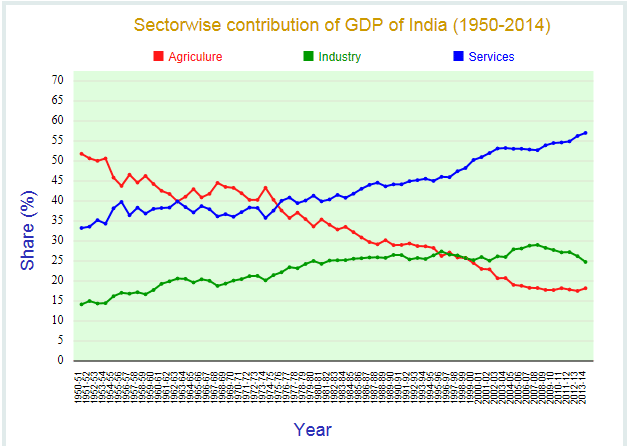 2018 was a year that Yes bank shareholders will want to forget in a hurry. Things came to the heed when RBI did not go with shareholder approval of 3 year tenure for Rana Kapoor and instead limited his tenure to just 5 months. This came after RBI had in April raised issues of corporate governance and ‘serious lapses’ with the functioning of Yes Bank,. We covered the differential of Yes Bank reported and RBI reviewed in the following post.
Yes Bank : RBI Finds 5x More NPAs Than Bank Reveals, Bank Says It’s Not Hiding NPAs

India’s shadow banking sector which in recent years had seen tremendous growth were thrown into turnmoil when India’s largest Infrastructure company, IL&FS which was rated at the highest level defaulted on its debt. With total debt being to the tune of Rs 91,000 Cr, it was a shocker like no other.
This has set off a avalanche which is yet to settle and one that has dented more than a few Balance Sheets. Just last week, DSP Mutual fund wrote down its investments in IL&FS to zero. DSP is not the only player to have been caught as similar write off were seen in funds managed by Tata Mutual Fund and BOI Axa Mutual Fund.
We covered the entire episode as it happened.
The IL&FS Downgrade and How To Navigate Debt Funds That Hold Its Bonds

Bank Mergers have been in the news for a while now. Last year saw SBI merge its subsidiaries into itself while this year, we saw merger of Bank of Baroda, Dena Bank and Vijaya Bank. We believe its good sign for consolidating banks in a longer run, but intermittently it will be a pain.
LIC went ahead and bumped its stake from 11% to 51% in IDBI bank. We expect still more mergers will be rolling in the coming years and the trend to continue.

Securitization saw a huge boom in last one year. To ensure a more orderly growth, RBI introduced tighter norms and involved banks in co-origination of loans. RBI has asked the banks to be co-originators of loans, so that banks can get to know the type of risk they are getting into. Apart from that RBI has asked NBFCs to take 20% risk on their books instead of earlier 10%. In addition, to make it more customer oriented, RBI has mandated for NBFCs to pass on the MCLR rates as and when it applies for loans bought by bank through securitization.
We covered the same in the following article.
Securitization -The Growth Vehicle For NBFCs 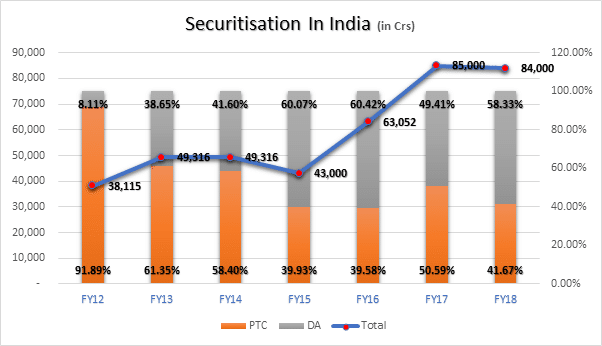 Post the IL&FS crisis, the fire soon spread to the larger NBFC space. In a matter of fortnight the whole commercial paper market dried up, which till then was very vibrant. This directly impacted the NBFC borrowings. To ease the liquidity concerns for NBFCs, RBI asked banks to lend more. But they were reluctant sighting ALM mismatch etc. Hence RBI tweaked SLR .
To read more on impact of SLR and HQLA read the below article titled.
Decoding The NBFC Bailout, The Concept of LCR and HQLA and All That Jazz

Second half of the calendar year saw crude going up and rupee depreciate against the Dollar. It was a double whammy, but inflation remained range bound. RBI which has been more nearly 18 months been over estimating the projected inflation in its last meet reduced it to a band of 2.7 – 3.2% for the financial year end. Even with lower inflation projected, RBI hasn’t gone ahead and cut rates but this has opened a window and if Inflation remains benign, should help RBI cut rates going into the future.
To read more on how to take advantage of changing interest rates in fixed income instruments read the below article titled
Reviewing the Fixed Income Portfolio and Adding Gilt Exposure 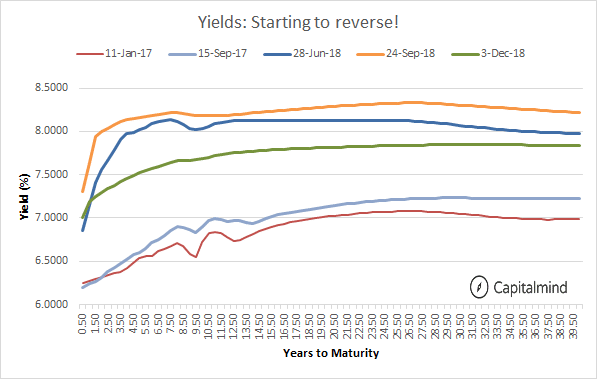 The calendar year saw lot of confrontations between RBI and government. Faced with a election that is now just months away and tightening credit meant that they felt that it would be better if RBI to cut it some slack by way of a higher dividend while at the same time removing restrictions on banks and allow them to lend by expanding their loan book. Urjit Patel suddenly resigned from his post of RBI Governor citing personal reasons. The reasons were far more than personal.
To read about what transpired and impact of RBI governors resignation please read the article titled
The Implications of RBI Governor Urjit Patel’s Sudden Resignation

RBI has been very conservative when it comes to Issuing Bank Licenses. Where the same has been issued to private entities, a key requirement is from them to shed promoter holding over time. While this had been going as planned in all Private Banks such as Yes Bank, Bandhan and even Kotak, Kotak threw a spanner in the works by trying to reduce the stake of their promoter by issuing shares that had no voting power. In other words, they at best tried to follow the rule of the law than the spirit.
RBI of course would have no such thing and rejected the proposal of Kotak to issue perpetual non convertible preference shares. With time running short, Kotak decided to take the bull by the horns and has approached the courts.  We covered the same in the following post
Understanding the Kotak-RBI Battle – Letter, Spirit, Rules and A Court Petition

At Capitalmind, we are not Journalists and hence our attempt is not to be first to report breaking news. Rather, we wish to critically analyse the issue at hand and provide a fair handed view that is easily understood by even those who aren’t in tune with the issue at heart. In other words, we try to simplify the complicated.
We try to eliminate the noise and focus on the signals. If you aren’t still convinced, we urge to to try our free 30 day trial which provides you with hand picked articles we feel adds value. You won’t be disappointed, we Promise.
You can sign up for the same here
https://www.capitalmind.in/30-day-trial-premium/