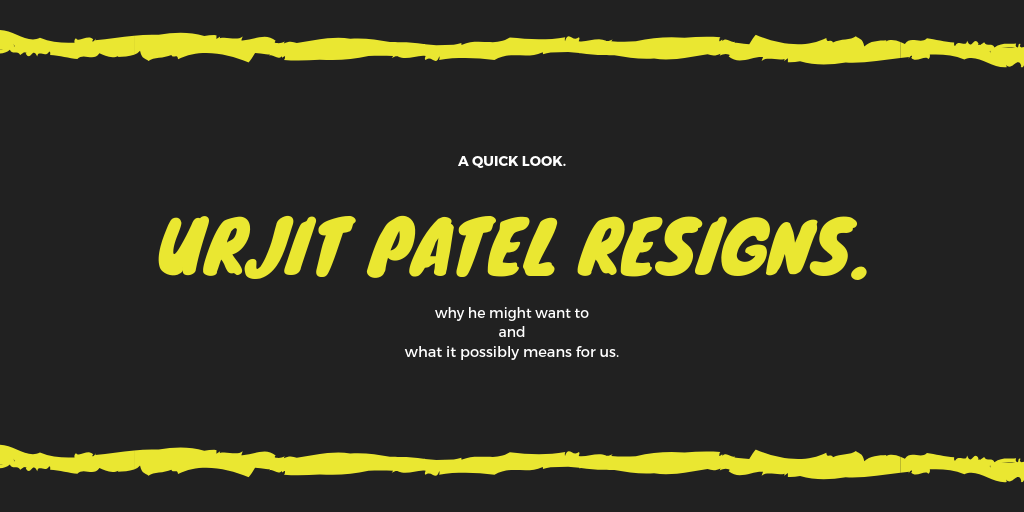 Urjit Patel, Governor of the Reserve Bank of India, has resigned. Abruptly. Saying he’s off for personal reasons. (See note)
How complex is this? Why would the central bank governor resign? What would make him? We don’t know but let’s look.

The government apparently interfered with RBI functioning. Governments often do. RBI abruptly removed all “evergreening” mechanisms for NPAs and that crippled many public sector banks, some of which then went into “PCA” – a mode by which banks can’t lend further and have to fix their capital structure. This puts more pressure on the government for recap, but at the same time, the government needs to meet fiscal targets, so there’s going to be some ill-will.
Other parts were about moving to more of a “board” type of functioning. Interest rates are now decided by a monetary policy committee (MPC) which then votes on the rates – so that the power isn’t entirely with the governor. Now there could be other regulators – a payment regulator was suggested recently. Also there are suggestions for a board for multiple other issues.
These aren’t entirely bad – there are such boards in the west too. In India, payments are restricted to banks, but non-banks have been the largest mover (wallets etc.) in the recent past. You could even argue that the PayTM type of wallet has resulted in much more financial inclusion that much of what RBI’s done in the past. This “slow” going by the RBI is perhaps undesirable, and a separate payment regulator for retail payment systems is justified. The RBI just doesn’t want to give up its turf easily.
But there is a fear about Section 7 of the RBI act, which essentially gives the government the right to say, “You have to do what we tell you”. This section, if applied for stupid things, will spook the market.

The disagreement on interest rates

Could it be the RBI refusing to cut its stance on interest rates? In the light of data that shows inflation falling and growth at risk, there would have been some expectation that the RBI stance would be less aggressive on rates. The recent RBI meet showed no such thing – there was only a microscopic reference to cutting rates if inflation remained low – they didn’t even have a stance that might be considered neutral.
Interest rates though are now decided by the MPC. Not by a person. It’s possible that Patel simply put his foot down and said you’re all with me or I’m off, or it’s possible that other people decided to go with the logic of staying hawkish until the beast of inflation was totally conquered. We don’t know, but we shouldn’t really blame a Patel for this until we do know.

Putting Strange People on the RBI Board?

Was it the demand for dividend?

The government says RBI has too much capital. And in my view, it does.
The RBI keeps capital for banking “emergencies” of sorts, through a banking stress test. It needs, according to me, about 600,000 cr. to 700,000 cr. as capital against a rising rupee. For that there is a “revaluation” reserve which has that much.
But there’s at least 290,000 cr. that sits on the RBI balance sheet in a DIFFERENT contingency fund, of which perhaps upto 200,000 cr. is too much. That 200,000 cr. is for a banking stress scenario, but when banks are in distress, it’s the government that is required to rescue them. If the government has to do the work, then why not hand over part of that fund to the government?
There needs to be a much more transparent discussion about this. There isn’t. And if someone has to resign rather than talk, perhaps that’s what it’s going to be.

A general note on transparency

The best thing about Rajan’s regime was the transparency. He said he’d act on data. And he did. It was predictable, and that’s what a central bank should be.
With Patel, we got very little. There was no direction of interest rates that was linked to data. There would be excuses why the data wasn’t doing what they said it would do, but there was no acknowledgement that the data was now worth to react on. We have low inflation for months now, and signs its getting even lower, but rates remain firm, and have risen through October.
We saw no data on demonetization. That was a horrible thing to inflict on us as a country, but we got nothing in return, and Patel actively refused to provide more transparent data on what happened. The fact that it happened in his regime is a serious issue – because he will always be considered a part of the problem and not the solution.
There’s a lot of areas where transparency is needed – what exactly are these NPA accounts that RBI wants everyone to declare as NPA? What happens if an account turns NPA at one bank and others don’t yet call it an NPA? Why would you not respond to a bank chief’s request for why you don’t think “capital” includes preference shares? (We all know why, but a response is surely expected)
We should have more transparent central bank regulators. And we need stronger institutions – and more of them rather than a few. RBI performs too many functions – a bank regulator, a monetary policy settler, a merchant banker for the government, a payment system regulator, a bond market regulator, a forex participant AND regulator and so on. We need separate institutions to work together but to be responsible for each of them, and not put all of these conflicting relationships with each other.

The market doesn’t need much of a reason to tank, so it might just do that big dip now. But the logical consequence is:

Fear set in when Rajan decided to not continue, in June 2016, but that didn’t last too long.
The markets are going to be concerned with why Patel resigned. Too much interference? Using Section 7? Or was it just that he just didn’t want to fight all these battles? There are lots of egos involved (any shift in transparency indicates that) and there is a feeling that the RBI needs to be more responsive in general.
With a government (and an RBI governor) who proposed and defended a horrible thing like demonetization, it’s difficult to now say that one was worse than the other. The consequences for all of us are that:
a) we’ll see some impact on the USD INR – it’s at 72.58 now after being below Rs. 70 a few days back, but this will probably settle once things are less murky
b) we’ll see financial markets take it on the chin. We are taking stuff on the chin anyhow.
c) we’ll see a new RBI governor. Let’s hope they don’t choose a doofus. There are people out these whose names are being circulated as “in the race” that make me fear for much more of a) and b)
More data will tell us much more. But at this time, the long term impact of such a resignation is: nothing much. We will learn and fix and grow, and such pains are part of the process.