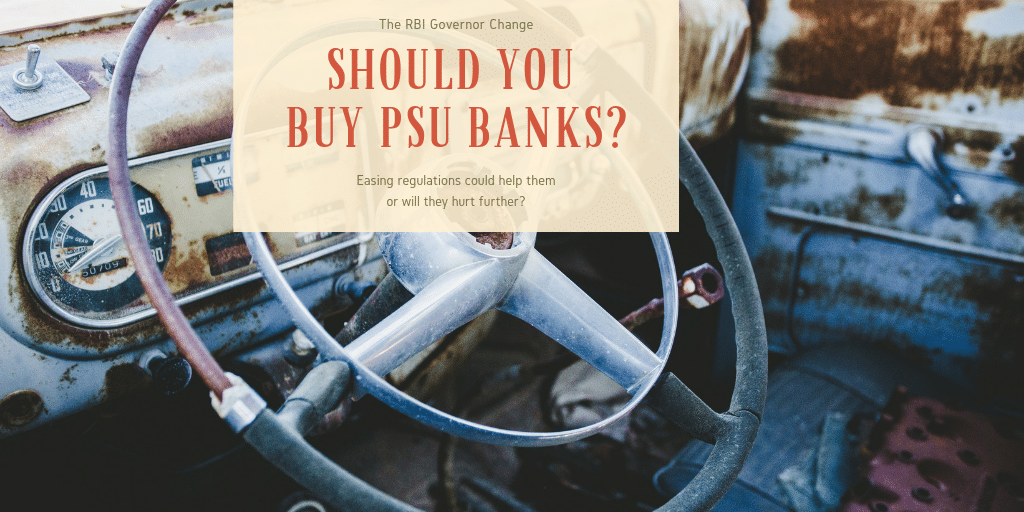 A governor resigns. The new governor is likely to be “soft” on regulation. What’s that going to do to the public sector banks that have been crushed by rules that don’t allow them to grow?
On a day when most market participants expected bloodbath, the Indices surprised one and all by ending the day strongly positive. Then again, should we have been surprised by the market reaction to what it essentially believes as easing of the current stringent rules in favour of lighter regulation.
In 1997, speaking at the Annual Conference of the Association of Private Enterprise Education, the then Federal Reserve Chairman, Alan Greenspan said:
“government regulation can undermine the effectiveness of private market regulation and can itself be ineffective in protecting the public interest”
In other words, in this historical speech, he believed that markets do not need regulation, they invariably self-regulate and it is the self-interest of market participants that generates private market regulation.
Today, when we see back to the crash of 2000 and more importantly the crash of 2008 which laid to bare the fact that self-regulation, for many, meant giving scant attention to Risk, we know how wrong Greenspan was on that day. But for years, this view also something Ayn Rand brought about in her views of what economic system serves the people the best.

Since the arrival of Raghuram Rajan, public sector banks have been under tremendous pressure. Banks which for years had been postponing attempts to clean up its balance sheet were under pressure with a deadline to meet.
Banks which had been growing their profits at a steady clip and one that wasn’t impacted by the 2008 financial crisis either were suddenly looking at booking losses that would wipe out years of profit.
Dena Bank has booked a Net Loss in last 3.5 years that has wiped out all its profits that it had seen from 2006-07 onwards. For Indian Overseas Bank, we would need to go even before to find enough profits that can be set off against losses booked by it since 2014-15.
IDBI Bank has 32% NPAs, and that tells you that 1 out every 3 rupees lent is now refusing to come back.
Urjit Patel was initially considered to be someone who will back off from the path set by Raghuram Rajan, but that didn’t happen as the pressure was kept up. RBI asked Dena Bank to freeze all fresh lending making it close to a zombie bank before the government decided to push its merger with Bank of Baroda along with Vijaya Bank.
When Banks take losses, the losses must be borne by someone – in most cases it would be the depositors but in India, that is a no-go area. Even when Global Trust Bank, a Private Sector Bank went down, the government & RBI by pushing it to be merged with Oriental Bank of Commerce.
Banks which need to have a certain amount of capital to meet obligations and absorbs unexpected losses.  This is generally based on BASEL norms which are applied universally. These losses have meant that many of the Banks ratios have gone down even though the government over the years have infused fresh money.
In 2002, RBI had come out with a Scheme of Prompt Corrective Action. The Reserve Bank of India would initiate certain Structured Actions in respect of the banks which have hit the Trigger Points in terms of CRAR, Net NPA and ROA. The triggers were tightened in 2017 to turn around lenders with weak operational and financial metrics.
Thanks to the continuous recognition of NPA’s, 11 banks came under the radar of PCA.  While Dena Bank has literally stopped lending, lending by these 11 banks were asked to stop expansion of branches, hold off onto new staff recruitment and most importantly were restricted from increasing the size of their loan book.
The difference between Dena and these Banks is that while Dena cannot even lend, these Banks can lend subject to the total outstanding remaining the same. In other words, they can lend to a new enterprise only if they have received payments from another enterprise.
Emergence of Private Sector Banks which aggressively chased growth and combined with Non Banking Financial Companies has led to loss of market share for Public Sector Banks. Yet, unlike say BSNL in the telecom sector, these are no push off’s and still well above the half-way mark.
With Private Banks not lending easily and large part of the Public Sector Bank unable to lend, the pressure is being felt and seen in the economy where job growth has slowed down. With elections fast approaching, a show-down was more or less inevitable. 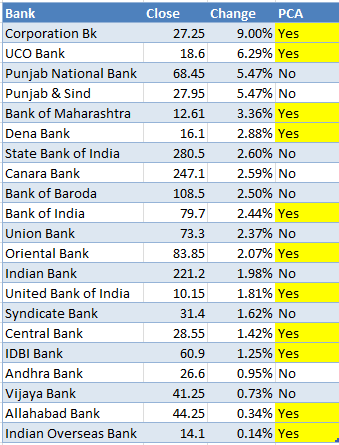 The Possible Change: Make It Less Tough on Them?

Gurumurthy who was appointed to the RBI Board a few months back has questioned the propriety of using BASEL norms in the first place. He said and I quote,
“But banks that are not internationally active need not conform to what [they] say. The universal banks need not conform to what [they] say. We don’t have any commercial banks. We have only universal banks because our banks do term lending. But still the same Basel norms are imposed,”
“We are doing more than what Basel wants and so the banks have less money to lend. These are all the things on which there is no discourse in India,”
While there is no word yet on who shall be the next governor of the Central Bank, the market seems to believe that whoever takes up the post will most likely be malleable and accept the government view when it comes to PCA.
Meaning: lesser regulation. Allowance for some lending growth. Changes to standards. All that makes these banks, currently valued at a fraction of their net worth, slightly more exciting.
This is reflected in the stock performance of PSU Banks today. While those banks for whom even loosening of norms would not make sense gained lower than banks which are better off while still under PCA such as Corporation Bank.

But No Change in Credit or Lending Culture?

The government’s focus is on adding capital, somehow, or merging weak banks with slightly stronger banks. This doesn’t actually change credit culture – if you weren’t careful enough when you lent, and you see no repercussions on your future, why will you change after a government rescue?
That means if you rescue these banks today or ease regulation, they aren’t going to be forced to change their own lending culture, and that’s equivalent to kicking the can down the road.

Should one Buy PSU Banks?

The answer for now is clearly No. Even if there is a relaxation in rules and Banks are able to move out of the PCA, with no change in the way loans are extended, it wouldn’t be long before they are back with huge NPA’s that require a bailout.
The market can be quite excited for a while, but unless there’s structural change, these PSU banks are going to have a tough time either now or later.
In other news, another bank that is in the cross hairs of RBI had a good day today – Yes Bank, up more than 6%. Problems with the outgoing governor that won’t hurt it anymore? The jury on this is still out for the moment.