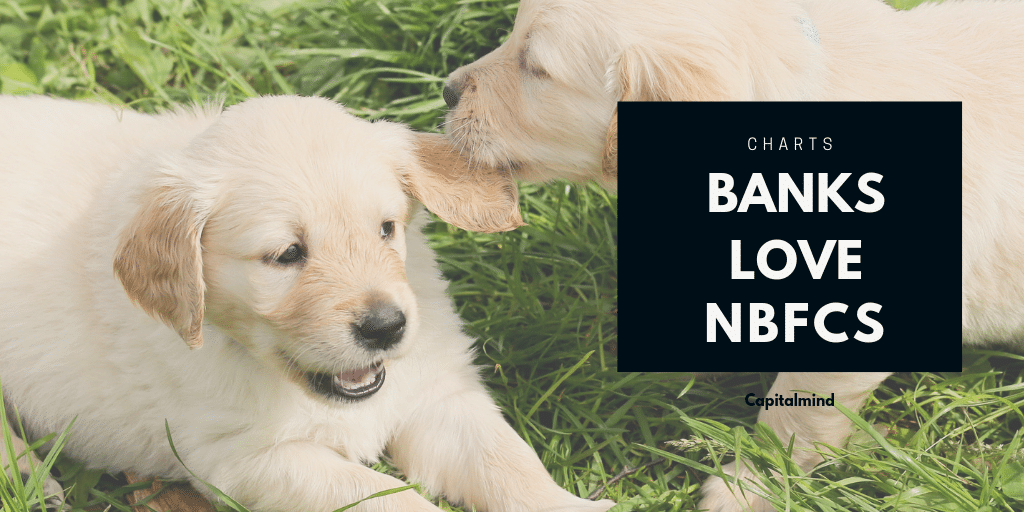 In today’s chart, let’s take a quick look at the allegations that banks aren’t giving money to NBFCs. Remember October? When NBFCs were falling like nine pins because of lack of liquidity? Well, they seem to have got their liquidity from banks.

In September and October, together, banks lent NBFCs a whopping 72,000 cr. to NBFCs. Most of it came about in September but still.

And then, bank credit to NBFCs has grown 55% over the previous year! 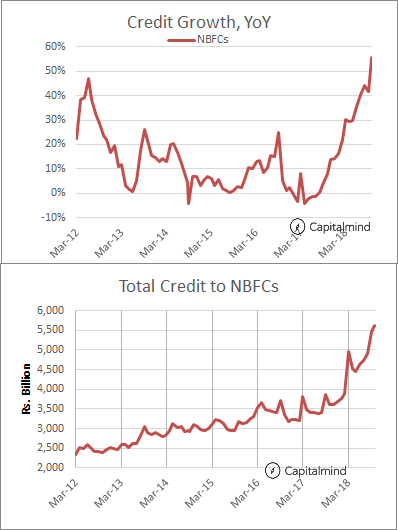 What’s stunning is this: In the last year, over 2 lakh crore has been given to NBFCs as “incremental credit”. That’s even more than any other subsegment of the economy – including housing. Banks 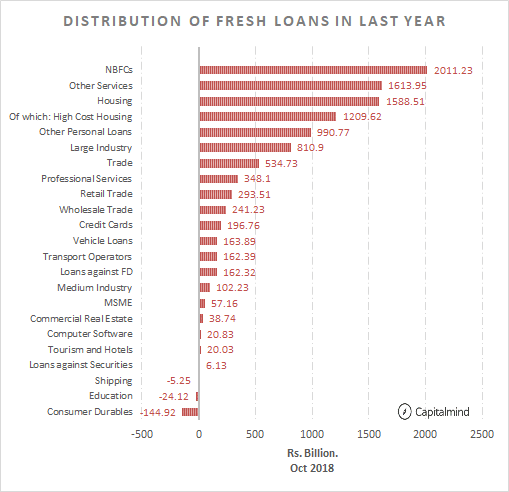 (Btw, note that high-cost housing loans took up over 1.2 lakh crore in the last year. That’s another bubble building up.)

Why are NBFCs being so favoured by banks?

Because they’re doing so much of the lending.

Because banks are bound by very tight RBI regulations. And NBFCs don’t have to have the same regulation.

For example, if you take a housing loan from a bank and the bank changes its base rate or MCLR, it’s applicable to you at your reset dates. However for an NBFC, they can have a “PLR” – a rate that you are pegged to. A new customer can get a different “PLR” called, say, “PLR2”. NBFCs don’t have to cut rates when RBI cuts rates, and in fact can charge lower rates for new customers, while retaining older customers at higher rates.

Also, banks can’t lend more to builders (they have limits). So they lend to NBFCs who then on-lend to builders.

Banks can’t do “zero interest rate” loans by charging the manufacturer instead. So NBFCs do it instead.

NBFCs can give you a car loan at 7% – by having the car maker pay the spread between that and the regular rate. But a bank can’t lend below it’s “base rate” or MCLR, so it’s going to struggle to put 7% on that loan document.

There’s a bunch of things banks cannot do, but NBFCs can, and this is all about regulatory arbitrage.

A Bank can simply buy a housing loan from an NBFC. And that loan can have all the multiple-level-PLR crap, and it’s perfectly legal because the bank didn’t originate the loan. Banks are thus quite happy if NBFCs do all the dirty work and then they can eventually take on the loans by purchasing them through a “direct assignment” process.

When will RBI take note of this and make NBFCs more liable? As much as this is fun for investors of NBFCs, it’s not great for the Indian public. RBI should take note – and they have in the past, by mandating no-preclosure-charges even for NBFCs.

NBFCs perform a vital function today – they actually go lend to people who want to borrow money, and some RBI rules are just too silly. Too often, banks are simply unable to compete and let the NBFCs do the origination, but then purchase the loans after a while. This process is unnecessary, and we have to ease some of the rules for banks so that they can compete as well.

But till then, NBFCs are going to stay hot favourites.