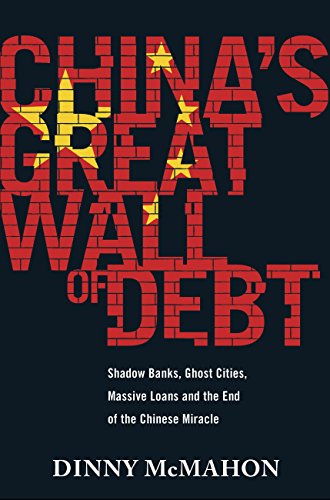 When IL&FS tumbled and the NBFC crisis reared its head, a word that was constantly used was “Shadow Banking”. Shadow Banking is basically financing by firms which aren’t supervised as closely as Banks. As much as we over-estimate the issues with Shadow Banking in India, thanks to the fact that Indian Banks offer Positive Interest Rates (Interest Rate – Inflation greater than Zero), Shadow Banking of the style that has been seen in China may never happen.
Jus to illustrate the size of Shadow Banking in China, China had about $8 trillion in shadow-banking assets, half the volume of outstanding bank loans. But that is just a glimpse of the wealth of data Dinny McMahon brings to light in his superlative book, China’s Great Wall of Debt.
China has grown at break-neck speed for decades without a single stumble. Analysts and Commentators have for years predicted the demise – from columnist Gordon Chang in 2001 to George Soros in 2014. Yet, the Chinese Dragon has continued to grow and now is close to challenging America as the largest Economy on Earth.
This book is not about how the growth happened, this book though in more ways than one outlines how the growth has been sustained through oceans of debt building everything in excess of what China may ever need. To give an example, he quotes Qiao Runling, the deputy head of the China Center for Urban Development who in 2013 said that “plans for new cities and new districts were sufficient to house about 3.4 billion people, more than twice China’s total population”
Its not just housing where such abundance has been seen, in 21 Industries the Chinese themselves admit to  “serious” overcapacity, a list that includes cement, aluminum, shipbuilding, steel, power generation, solar panels, wind turbines, construction machinery, chemicals, textiles, paper, glass, shipping, oil refining and  heavy engineering.
This over-production and consequent dump has had enormous impact on companies servicing those industries across the world. China today produces more than 50% of the total amount of steel produced worldwide and the resulting oversupply has meant that the only way for other countries own steel plants to survive is by way of having Anti-Dumping duties.
The Chinese boom has also meant a boom in spending – both domestically and overseas. From Real Estate in Vancouver to Sydney, Jade in Myanmar to Soccer clubs to making mega films like “The Great Wall”
All this hasn’t come cheap. At the end of 2015, Chinese firms had borrowed debt equivalent to 163% of China’s GDP.
China’s export machine we are told are responsible for all the riches of the nation but is it. While the Blaance Sheets of ECB, the Federal Reserve and Bank of Japan are seen as the major culprits, its interesting to learn that between 2007 and 2015, China was responsible for 63% of all new money created globally.
The question then is, if there is so much money floating around, why hasn’t that led to massive depreciation of the currency or high inflation as money is spent. The simple reason is the high savings rate of Chinese – China’s Gross Savings Rate was measured at 46.4 % in Dec 2017.
Rather than spend, much of the money comes back to Banks in other ways & is again routed back as new loans, some of which maybe pure ever-greening of loans which may never be repaid. We in India have in recent times seen the impact of ever-greening on bank finances when they finally are forced to clean up the balance sheets.
The book is a data mine of numbers and facts. From the fact that China was in 2016 building 100+ skyscrapers higher than the Empire State Building to the fact that China at the end of 2015 had 7100 leasing companies and 4500+ Peer to Peer lending companies by end of 2016.
Of course, not everything about China is just hype. It has brought more people out of poverty than any other country in such a short time frame. According to the World Bank, more than 500 million people were lifted out of extreme poverty as China’s poverty rate fell from 88 percent in 1981 to 6.5 percent in 2012. While India may not pursue the same path as China, our Goals aren’t any different and in that sense, its worth knowing how China has grown.
As an Amazon reviewer wrote, if you wish to read one book on China this year, this is that book. Go Read;
China’s Great Wall of Debt: Shadow Banks, Ghost Cities, Massive Loans and the End of the Chinese Miracle