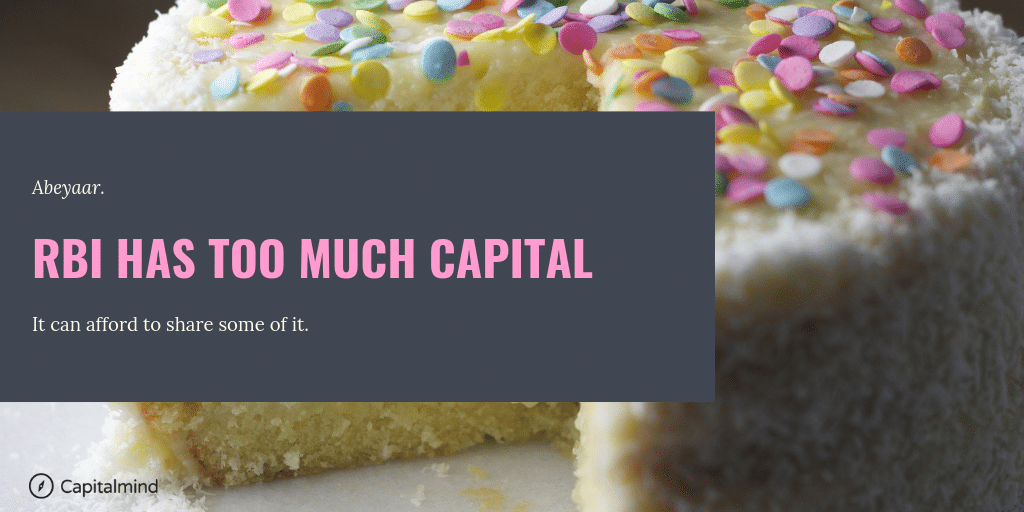 The Government’s asking the RBI for money, and saying it has too much capital. The conversations around this are of this sort:

But let’s look really at what it all really is. In a simplified format.

The Government wants a piece of what RBI has been squirelling away for years out of its profits. We’ll examine why.
RBI makes a profit. It invents money. Mostly out of thin air, but given it’s in Mumbai, the air is more likely to be thick.

Haha. But really, how does it make money?

It makes money when banks take rupees from it through the “repo” window, for an overnight transaction. So, technically it prints money and earns interest on it, and then takes that money back in. This is called Seigniorage but if we’re changing city names can we please do something about such terms also. It might lose money as well, if banks don’t borrow from it and instead, park money with it and ask for reverse-repo interest.
Every rupee printed is a liability for the RBI – even in rupee notes, you’ll see the “We promise to pay the bearer the sum of…” – it’s a note saying the RBI owes you money. An asset for you, a liability for the RBI.

Wait. If the printed rupee is a liability, where are the assets?

Now the asset side contains, partly, government bonds – they pay interest. That interest is a profit for the RBI. (FY 18 – they had about 6.9 lakh crores worth of government bonds, and made about Rs. 48,000 cr. as interest from that alone)
Also on the asset side is the massive set of forex reserves. There’s also interest from “foreign” sources – they own US treasury bills/bonds as their forex holdings. Even if that pays 1%, they have $400 billion, so they’ll made around $4 billion a year. Last year they made about Rs. 23,000 cr. from that too.
This adds up to a lot of money – in FY18, they made Rs. 78,000 cr. in income.

How much of that is profit?

Because it’s not apparent why the RBI should be putting so much in “provisions”. But first, let’s take a look at the RBI Balance Sheet: As you can see, the forex assets, gold and rupee government bonds are on the asset site of the balance sheet, which is about Rs. 36 trillion or Rs. 36 lakh crores.
The liability side consists of

It’s the provisions that are the niggling problem.

Why? What’s in the provisions?

Basically the provisions are for:
a) Shit happens to the US Dollar which we hold in massive quantities and the rupee appreciates so we have this Currency and Gold Revaluation Account.
b) Shit happens to Gold in terms of its falling in price so much that we need a reserve, so look at a) above.
c) Interest rates in India go up big time and rupee bonds have losses – so the IRA-RS account applies.
d) India owns some US Bonds which can lose money if marked to market. Those losses should be in the IRA-FS account but are actually put inside of the Contingency fund. (Weird accounting)

Oh So It’s Just A Provision Against Losses? Why Is That A Problem Then?

Abeyaar.
Just saying it’s a provision against potential losses doesn’t mean you can keep putting money in that thing forever and make it balloon to a ridiculous size.
I can tell you that you need to have something for a rainy day. That doesn’t mean you buy an umbrella factory.

Think about it. Why do you need 10 lakh crores set aside for provisions? That’s just ridiculously high.
Look at the Contingency fund. It has 232,000 crore rupees.
This gets hit when there are losses on the foreign bonds we hold, for example. But how much is that? In the last year, as the US raised rates, the loss was a miniscule 17,000 crore rupees. Even if we tripled that, the loss would be 50,000 cr. at most.
This also gets hit in some cases when rupee interest rates rise, hurting rupee bond prices that the RBI holds. This is perhaps a larger amount, say Rs. 75,000 cr. required as a provision. At best, these two add up to about Rs. 130,000 cr. as provisions.
Then why do we have a massive Rs. 232,000 cr. in it?
We actually added Rs. 14,000 cr. to this fund this year. Why?

Sounds large. But There’s Also Nearly 700,000 cr. in some Currency Revaluation Account too?

Yeah. That’s because if the RBI buys a dollar at Rs. 70 it records the dollar as Rs. 70 on the asset side, and Rs. 70 is the “rupees issued” part of things.
But if the Rupee goes back to Rs. 65 to a USD, what happens? On the Asset side, the dollar is worth Rs. 65.
On the liability side, we have Rs. 70 issued (RBI can’t just take it back because the dollar fell against the rupee) so instead have, on the liability side:

If the Rupee goes to Rs. 75 to a USD, the CRA is increased.
The increase of CRA – because the dollar has gone this far – has been so much that the CRA has nearly Rs. 700,000 crore in it.
Do we really need that much? We have about $400 billion in reserves. The reserve would make sense if the rupee rose 25% in a very short time, which is reasonably unlikely. (It’s fallen that much – hasn’t been allowed to rise anywhere close)
We could easily do with much lesser. Even taking 10% off, that would be excess provisions of Rs. 70,000 cr. on this account.

There’s an asset development fund of Rs. 22,000 cr. It’s not apparent what the RBI might want to build, but holding 22,000 cr. as a provision against that sounds a little excessive.

Wait, So How Much Excess Does The RBI Have?

Depends on who you ask.

Because if you ask RBI, they get all antsy and say there is no excess.
If you ask the government, they start cribbing about how RBI is getting antsy.
If you ask me, I’d say around Rs. 300,000 cr. seems to be excessive – from various provisions.

So Can The RBI Give It Back?

Of course. But it can’t just give it back by printing rupees. That would be silly. Because printing rupees means you increase your liabilities. We want to REDUCE them.
So what you do is:

This gives the government the ability to issue more bonds (since it just saved a truckload on interest costs) and thus use that additional money to do different things.

You’re Saying This is Good?

It is good.
Because the government is the real contingency owner here. When banks are in trouble the government has to bail them out, not the RBI.
Why should the RBI hold all those reserves then? It’s excessive, and almost irrational to do so. This money is better off with the government, even though many people think no money is ever better off with the government.
You could compare this with other countries too – but even the US Fed has $66 billion of losses in its holding of US government bonds, which would completely wipe out its capital (of $39 billion). But it chooses to not mark to market. There are countries that limit the size of the central bank balance sheet. Many say that if the net worth turns negative, the central government should recapitalize the central bank immediately.
These are definitely options, but it’s best if we limit the “contingency” and “Revaluation” reserves to a much lower number than the current 28% of balance sheet. All tax payers must demand this – if institutions like RBI hoard excess capital, that means the government will keep increasing our taxes for revenue.

So We Can Expect A Cut In Taxes If RBI Pays?

That’s a whole different ball game. Let’s just put it this way: the pecking order is:
Priority 1: PSU banks that need recap
Priority 1: Farmer loans that must be forgiven
Priority 2: Air India and other loss making PSU thingies.
…
Priority 647: Cutting taxes.
So yeah, you could expect it if you want.