Happy Diwali Folks! We write a post every Diwali predicting strange things and laughing at the previous year’s predictions, so let’s not break that tradition.

In our last year’s post we said some very interesting things:

US Interest rates will rise again, on the back of a strong economy. However we expect trade barriers to come up in some form, which will dampen the spirits of those who export to the US.

Got that right on both counts, apparently. US Rates are higher across the board, with three rate hikes by the Fed. And now the 10 year bond is well past 3%. 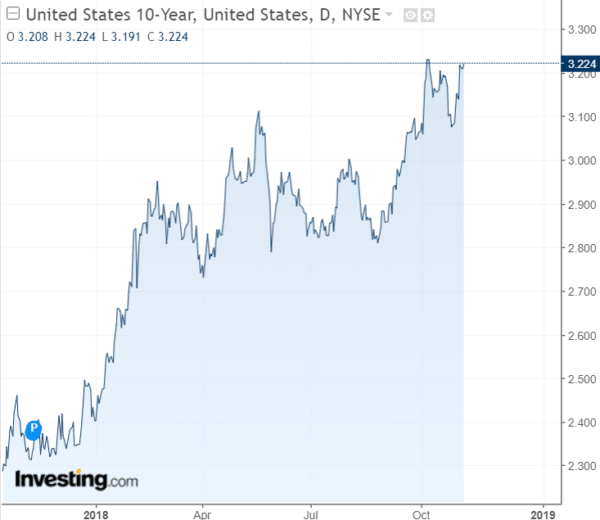 And yes, the US has created a trade war – by putting import duties on Chinese products and on a bunch of other stuff. China’s retaliated but there’s only that much it can do.

While we got that right, it wasn’t difficult – because it seemed so obvious at that time.

While there are some early signs of euphoria in the western capital markets, there is no reason it can’t continue for another year. However, in 2018, there’s potentially a big fall due to a geopolitical event.

The western markets had a hiccup but we still remain upward bound for the most part. There’s geopolitical events (Iran sanctions, trade wars) but there’s no sign of that causing a big fall yet. So, no points here.

Indian markets are going to see a steady rise until people start talking openly about targets of 15,000 on the Nifty and 50,000 on the Sensex. A big liquidity event will drive down prices and force selling.

Full points here. The Nifty went to near 12,000 and the commentary did sound insanely bullish. And then there was a big liquidity event – in that IL&FS defaulted and caused a flutter in debt markets, which then drove liquidity out of equities. Yes, forced selling due to that too.

Housing Loan defaults will occur as prices continue to stagnate or fall. Most importantly there will be a problem in loans given to people who’ve bought an under-construction apartment from a builder (like JP Infratech) who has gone bankrupt. People will choose not pay a loan where the builder has taken the money but not yet built the house. This is likely to affect NBFC valuations too.

Half points here. Because housing loan defaults haven’t yet occurred from the retail end. But we have seen under-construction loan issues, with Supertech defaulting and a liquidity crisis making the home loan NBFCs cut their further disbursements and growth. (Link)

NBFC valuations have been hit hard with Indiabulls Housing, DHFL, PNB Housing, Canfin Homes and even a Piramal Enterprises down between 20% and 50% in a couple months.

Bankruptcies in the corporate sector will continue with some big names going under. Banks will become majority owners in such businesses and will try to create a mechanism to monetize (or RBI will force them to)

Full points on this one. We saw resolutions of Monnet Ispat (link) and Bhushan Steel (link) happen. Electrosteel is on. Essar Steel saw a fight that will ensure zero haircuts for lenders. The NCLT process has pushed resolution processes to ensure sales (monetization) or liquidation (again, monetization). Banks are now majority owners in Ballarpur through a restructuring and IDBI has even taken over their plant. (link)

The Indian economy will weaken in terms of lower growth for a few more quarters but by next Diwali there will be signs of a strong turnaround, as the impact of GST kicks in.

No sign of lower growth. Strong turnaround in the economy seems to be happening, but the impact of GST is quite delayed. It looks like we’ll have to still wait it out, so no points on this prediction.

India will finally reduce taxes. By force, because the economy’s hurting.

Don’t even say “reduce taxes” or you’ll be arrested or something. But the good thing is that the government did cut excise duty by Rs. 1 per liter when crude went to astronomic levels and petrol prices at the pump were close to triple digits. Might give a quarter of a point here.

Sectors to watch for bullishness are: Chemicals, Electric Vehicles, Railways and Pharma. Would stay away from financials, organized retail and FMCG.

FMCG and organized retail got more expensive. Horribly wrong here. VMART has nearly doubled, DMART is 30% higher. Nestle is 50% higher. So negative points here. (But chemicals did do well in the year –  Pharma is better but not yet out of the woods. Railways and EV didn’t show any signs of bullishness after)

Finally, the low VIX regime will change, but could take till mid-2018 to do so. Volatility will return, and 2% days will become more common.

Well, this one’s come about in October. VIX went to 22 and has been higher than the 10-14 levels we’ve seen all year. Volatility is back.

Typically predictions are interesting only if revisited. We’ve had an interesting year at Capitalmind too. Premium portfolios have seen a drubbing, though the Momentum portfolio did manage to keep it up at about 15% returns in the year. The longer term portfolios saw exits and a bunch of stocks getting beaten up big time too, and we hope to have a better year next time. The return this time has been in bonds – where higher yields have created 10-12% return opportunities.

At Capitalmind Wealth (https://capitalmindwealth.com) we have been in about a year and we’ve had a big hit in the equity portfolios, though we kept high debt components and therefore were able to reduce our overall fall somewhat. Having said that we continue to focus on building for the long term and are adding more stocks as we find that good stocks are down to attractive valuations. Looking forward to a great year ahead!

Here’s a small set of predictions for the year ahead:

At Capitalmind Wealth, we’ll add more portfolio types that customers can allocate to, including momentum, fixed-income through bonds and an all weather portfolio. More as that develops!

That’s about how much I can say. It’s not saying which stocks etc, because for that you have better and bigger people on TV. I’ve not been bullish for a while but this next year looks to me as a great time to be a buyer. And we already have stocks at great valuations, even as they show phenomenal results in comparison with their stock prices. Be smart, be steady and be frugal – that’s what I think I should do in the next year (although, you might ask, why aren’t you already doing it? But hey, it’s Diwali).

Have a fun time and a wonderful year ahead, folks!